Rugby League
News
St Helens' Alex Walmsley reveals how he overcame imposter syndrome to establish and maintain a career at the very top of the game
George Riley
17:05, 04 Aug 2022

Crippled by self-doubt, Alex Walmsley was a handshake away from a career as a Quantity Surveyor in Wakefield when St Helens came in with a three-year contract that would turn him into a rugby league international.

Ten years on and the imposing prop has revealed how he overcame imposter syndrome to establish and maintain a career at the very top of the game.

Walmsley will be one of the first forwards on Shaun Wane’s team sheet when the England boss names his squad for this autumn’s World Cup. But it has been a long road both mentally and physically for the giant 6’5” international to convince himself that he was worthy of his place in the sport.

“I genuinely thought I would get found out at some point,” Walmsley tells me this week, amidst a clatter at the door as his young kids return from holiday club in St Helens.

“Thanks for trying but off you pop back to the Championship where you belong. That is how I felt for a long time. Even when I was playing every week.

“But doubting myself made me push myself even harder to learn my own craft, to have a career out of it at the very least. I just wanted to be a good Super League player, forget internationals. Having this inferiority complex of what other people could do and what they had, I had to really work hard at.”

Walmsley was 22 when he was in that office in Wakefield, poised to accept the offer of a job that he had trained for, earning a 2:1 in his Quantity Surveying degree at Leeds Metropolitan University.

He was playing part-time at Batley having been with amateur club Dewsbury Celtic right through until he was 21. The office was looking for someone to come in and manage the company, to be head of department long-term, and given that Walmsley felt he had missed the boat to turn professional as a rugby player he was ready to accept. “He offered me the job and the weekend before I was supposed to start I had to ring him and say that St Helens had given me a three-year deal”. 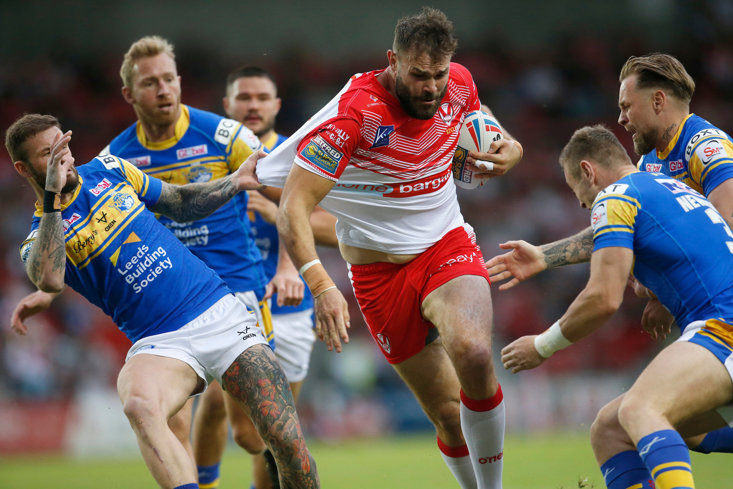 It is hard to conceive that such a giant, imposing menace of a player could have been so consumed by doubt. Walmsley has turned down several approaches from Australia to move to the NRL since standing in that Surveyors' office. But imposter syndrome is real. It convinces the sufferer to doubt their ability, skills or sense of belonging, despite often compelling external evidence of their competence. It ran a risk of stalling Walmsley’s early career and hindering his development.

He recalls joining up with St Helens for the first time and being surrounded by players he watched on television.

“I’m 6’5 and 18 stone, so I knew with some speed I would do a good carry, or make a good tackle, that is just physics. But there is more to our game than just physics.

“It was a surprise that I was thrown in the deep end but I was still expecting to get a tap on the shoulder when all the injured players got back. To stay in the side gave me confidence but it took a while to go and you still doubt yourself. That was the making of me.”

Walmsley is now celebrating his testimonial year, having cemented his place in the St Helens and England pack, with Saints bidding for a record fourth consecutive Betfred Super League title, and England searching for glory on home soil when Australia, New Zealand and co arrive for this autumn’s World Cup.

He still feels like the accidental rugby player, but has learned to channel that self-doubt in a positive way, with that extra drive and desire producing one of the most physically combative prop forwards in the game.

“I wanted to look like a professional rather than someone who was just floundering out there. Having good people around you helps with that. Being the best version of myself is what has driven me. I wanted to become not just what I expected myself to be, but what everyone else expects of you as well.”