Ajax will walk out onto the pristine turf at the new Tottenham Hotspur Stadium knowing they have the firepower to tear Spurs apart and put themselves into the Champions League final.

The Amsterdam club has already shown in previous rounds that away games are where they play with freedom, already putting in thumping performances as they dumped out Real Madrid and then Juventus with devastating away performances.

Now they will try to replicate those free-flowing away showings in North London and given Spurs are without key men Harry Kane and Heung-Min Son, things are looking good for the Eredivisie side as they look to reach their first European final in over two decades.

Ajax boast the most potent attack in the whole of Europe. They have scored more goals this season than anyone else including Pep Guardiola’s Manchester City and Ernesto Valverde’s Barcelona. They have found the net 160 times in all competitions this term a record that towers over their opponents tonight Tottenham, who have only scored 98 times in all competitions this term.

Indeed, the other Champions League semi-finalists, Barcelona and Liverpool, who meet tomorrow are also way off this incredible Ajax side in terms of goals. Barcelona, led by Lionel Messi, have scored 130 goals while Liverpool are down at 104 goals.

Ajax’s sumptuous attack has been spearheaded by an unlikely bagsman, former Southampton misfit Dusan Tadic. The Serb has enjoyed a remarkable season, hitting 34 goals and assisting 21 in 51 matches this season. He has been so good this season that only Messi and Kylian Mbappe have been involved in more goals in Europe this term. Phenomenal.

Alongside Tadic are the remarkably talented Hakim Ziyech and David Neres. The Brazilian - just 22 - has hit double figures in both goals and assists this term while the Moroccan has hit 20 goals and 20 assists. That front three, supplied by the supremely talented Frenkie De Jong and Donny van de Beek have wreaked havoc against some of the top defenders in the world.

Spurs will need to be resolute tonight despite the pressures from the home crowd. If Ajax get into their rhythm it could the tie could be over before the second leg in Amsterdam next week. One thing is for sure though, there will be goals. 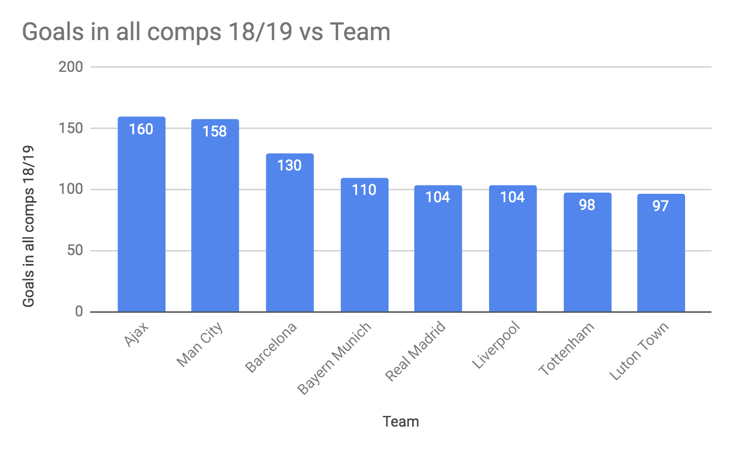