Lionel Messi swept up his seventh Ballon d’Or in Paris on Monday night, and while you can’t deny the Argentinian superstar has been in scintillating form, the result makes France Football’s annual award look like nothing more than a high school prom-esque popularity contest.

There has been widespread outrage at Robert Lewandowski missing out on a second consecutive award, as the organisers pulled the plug on the 2020 instalment as a result of the Covid-19 pandemic. The Bayern Munich star would have been nailed on to win in 2020 easily and could have snatched the 2021 award as well. This year, nobody in the world of football had scored more goals than his 64 in 54 matches. The last time a player hit those sorts of figures, they won the ‘prestigious’ award and that man was Cristiano Ronaldo in 2014.

Not only did the Polish forward score a frightening number of goals, he beat the late Gerd Muller’s Bundesliga record of most goals in a single campaign with 41. His goals across 2020-21 also earned him the European Golden Shoe with a mouth-watering 48 goals and yet he found himself overlooked for the Ballon d’Or.

There is no disputing that Messi had an astonishing year and he was, as always, a worthy recipient of the award, but it just felt as though many people gave their votes on the sole basis of seeing the Argentine finally get his hands on an international trophy. He was of course spectacular in Argentina’s Copa America triumph, but with the stats registered by Lewandowski over the last two years, you would feel that, with 2020’s edition being written off, last year’s stats should have been considered too.

To try and ease the backlash, France Football announced a new ‘Striker of the Year’ award which no one other than the veteran Polish star was going to receive. If anything, the gesture appeared more disrespectful given the circumstances. They did not introduce an award for a midfielder, defender or goalkeeper, just a forward. So, it just seemed as though they were trying to brush the controversy under the carpet and it felt clear that the voting was based on sheer popularity. 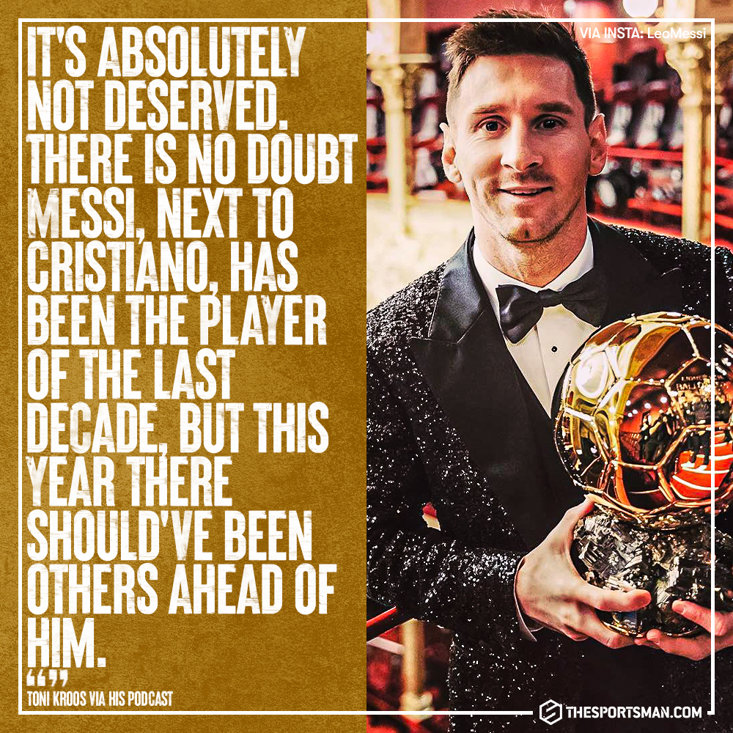 This is where Messi must get plenty of credit. When accepting the award, he knew how much Lewandowski deserved one and he used his platform to make that point clear. He said: “Robert, I think France Football should have given you the Ballon d’Or last year. We all know that you deserved it, you were the just winner and it was not possible due to the pandemic. You have to have it in your house too.”

With those comments, one of the greatest players of all time has hopefully ignited a spark that could see a belated 2020 award be made to commemorate Lewandowski’s outstanding year and for France Football to put things right. But sadly, the winner controversy was not all that was criticised by the public.

Mohamed Salah, arguably the best player in the world right now, only ranked seventh, one place behind Ronaldo. Then there was Norwegian goal machine Erling Braut Haaland, who became the fastest Bundesliga player to 50 goals, in just 50 matches. He did not even make the top 10 and had to settle for 11th as Manchester City’s Kevin De Bruyne finished eighth.

Then there was Kylian Mbappe, who had scored 45 goals across the year, second only to Lewandowski - as well as providing 20 assists (also second in 2021) - and yet finished ninth. It is becoming clear that the votes are seemingly made based on how a player’s team performs rather than the contributions that the individual themselves make – and that is what this award is supposed to be about.

If this award is to have any standing moving forward, it has to reflect an individual’s performance over how their team fares in competition. For Haaland not to make the top ten with his amazing goal stats just shows that something isn’t right when it comes to voting. The same applies to Mbappe who should have been closer to the top five.

Unless there are drastic changes to the structure of the voting and ranking of this award, it stands to lose its hold on the football community when it is no longer considered a great privilege to win it. The Ballon d’Or could soon be rebranded the Ballon Bore if it's not careful​