Boxing
News
Where? When? How To Watch? We've got you covered ahead of a thrilling heavyweight contest
Kieran Spratt
07:10, 18 Apr 2022

Fight fans are in for a real treat this weekend as the long-awaited Battle of Britain between WBC and The Ring magazine heavyweight champion Tyson Fury and Dillian Whyte, who has spent years waiting in the wings for another world title shot, finally arrives at the Wembley Arena.

A full house of 90,000 fans are expected to be in attendance when these two titans take to the ring, with the unbeaten Gypsy King making his first appearance on home soil since the summer of 2018. Here’s everything you need to know about a huge night of boxing in the capital.

How To Watch: BT Sport are broadcasting the Fury vs Whyte fight in the UK and the PPV event will cost £24.95. The main card is expected to start at 7pm, while Tyson Fury and Dillian Whyte are set to make their ring walks at approximately 10pm.

Last Fight: ‘The Gypsy King’ ended his rivalry with Deontay Wilder in explosive fashion in October, stopping the American in their trilogy fight in Las Vegas. In a bona fide Fight of the Year contender and one of the greatest heavyweight showdowns in history, Fury had to recover from two knockdowns in the fourth round before emphatically stopping ‘the Bronze Bomber’ in the eleventh, retaining his WBC strap in the process.

Last Fight: After suffering a shock knockout defeat to Alexander Povetkin in August 2020, Whyte got his revenge over the Russian seven months later in Gibraltar. After dominating form the opening bell, ‘The Body Snatcher’ dropped the former world champion in the fourth round, ending the fight with a peach of a left body shot that almost sent Povetkin through the ropes. 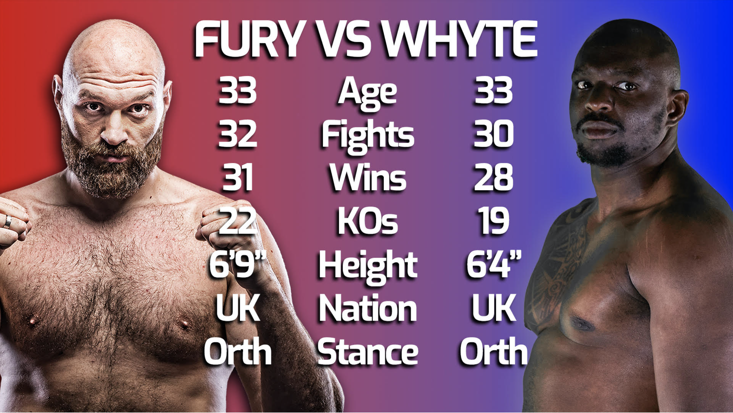 Fury: "I'm overwhelmed with the amount of support I've had in the last few years.

"It was only right for me to come back home and give the British fight fans what they deserve, what everyone's been gunning for for a long time.

"After this fight they're going to make me the patron saint of England, not St George,"