Copenhagen of Denmark take on Malmo of Sweden in the Europa League on Thursday evening and it’s set to be explosive.

The Danish capital and the largest city in the Swedish county of Skane are separated only by a 30-minute train ride across the Oresund Bridge, and fans of popular BBC Two drama ‘The Bridge’ will be aware of the close proximity between the two clubs.

Top spot is at stake as first host second in Group B, but so too are bragging rights.

Copenhagen are the most successful club in Scandanivian history and Malmo want to knock them off their perch, with the sides finally able to go head-to-head in continental competition.

However, it goes a little deeper than that.

Asked by The Sportsman just how far back the rivalry goes, football journalist Frida Fagerlund, who writes for Swedish newspaper Sportbladet, told us: “That depends on who you’re asking. The Malmo fans have far more hard feelings towards Copenhagen than the other way around.

“Some of it has to do with the fact that Copenhagen is the biggest club in Scandinavia, a label Malmo really want to put their hands on.

“However, there is also an infected history between these two clubs going back to the 2005 Royal League clash in Copenhagen when Danish police were reckless towards the away fans. That night has always stayed with Malmö FF and certainly increased the fire.

“There was an explosion when the draw was made, an emotional one at least! The whole city of Malmö would like to finally get their revenge.”

The two teams do not meet often; before this season’s clash in Malmo, they had not met since that incident 14 years ago.

Peculiarly, despite their own league pursuits, Malmo supporters feel more of a rivalry with Copenhagen than with teams from the same nation.

“Since Malmo don’t have a local rival in the same way (most of the other big clubs in Sweden are either in the Stockholm or Gothenburg area) they focus a bit more on Copenhagen instead.” 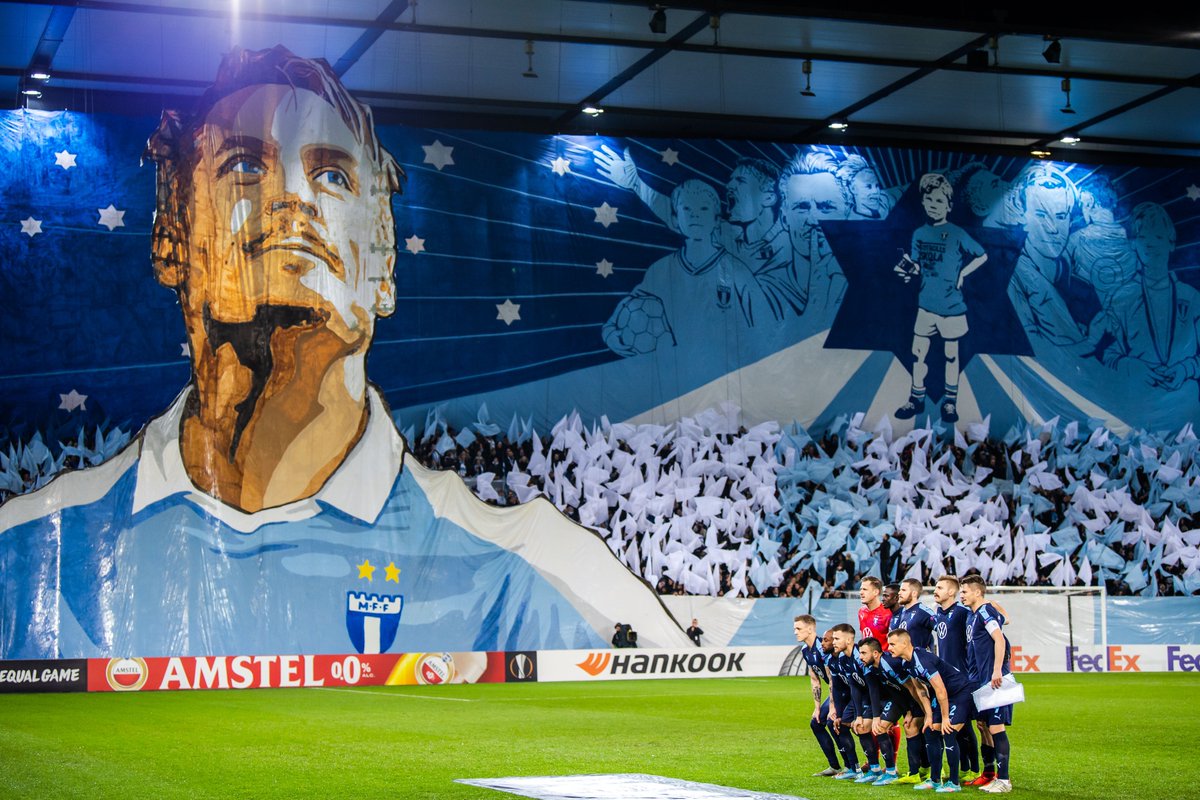 While a channel of water separates these Nordic rivals, you may be surprised to know fans will often see each other in person and share banter about their respective sides’ fortunes. And, if you’re wondering, no you don’t need a passport to travel between the two.

“It’s very common for southern Swedes to work in Denmark, which means they cross the bridge on a daily basis.

“It’s actually not uncommon to hear more Swedish than Danish at Copenhagen Airport, for example.”

While it may be Copenhagen against Malmo, Fagerlund insists it does not go further than that, with fans of other Swedish clubs unlikely to rejoice should Malmo get a result.

However, every football fan will surely rejoice if Markus Rosenborg is able to cap an incredible story in his final ever game for the club.

The Malmo legend scored in the very last minute of his very last home game back in November as the Swedes fought back to beat Dynamo Kiev 4-3. The hero then, he has the chance to write one more chapter into the club’s folklore.

“Since it’s Markus Rosenberg’s last game in the Malmo shirt every away fan will definitely be on point,” adds Fagerlund.

The battle of Scandanavia and the Europa League’s very own derby clash. We can’t wait.

x
Suggested Searches:
Tyson Fury
Manchester United
Marcus Rashford
Lewis Hamilton
F1
Air Jordan
More
sports
Five Of The Finest Massage Guns To Fight Those Aches And Pains
Let’s face it, as much as working from home has been brilliant in many ways, no commuting time, [ ... ]
sports
From Cheese Rolling To Maradona, It’s The Top Sports Docs To...
Lately we’ve been spoiled for choice with live sport, there’s been top class boxing, pulsating [ ... ]
sports
The Inspiring Running Books That Will Motivate You To Smash...
At the time of writing, it’s pretty grim out there. It’s bitterly cold, wet and seeing a [ ... ]
sports
From Chill Panda To Headspace, Five Apps That Can Help Improve...
Let’s be honest, modern life can be a challenge. And it’s not just us saying that. According [ ... ]
sports
The High Performance Pod Is A Deep Dive Into What It Takes To...
If there’s one podcast that’s been the talk of the audio town of late, it’s The High [ ... ]
sports
Sarah Fuller Makes American Football History, 5 Sport Stories...
Wow, that was another huge weekend of sport to lift our spirits. Keep it coming sporting Gods. But with [ ... ]
sports
The Looking Sideways Pod Shines A Much Needed Light On The World...
We’re all looking out of the window at the moment, thinking about a world we once knew. Perhaps [ ... ]
sports
The Five Best Coffee Table Sports Books From Taschen This Christmas...
There is nothing better than a cold December night, curtains shut, fire (or heating) on and forgetting [ ... ]
sports
Save Hundreds This Black Friday With These Five Top Tech Deals
Black Friday is upon us and thanks to Covid it’ll be more different than ever. Gone are the shoppers [ ... ]
sports
The Best Dumbbells To Help Bring Gym-Quality Workouts To Your...
Workout at home they said, it’ll be easy they said. Anybody who’s been on the hunt for gym [ ... ]
sports
Logan Paul Calls Out Mayweather, Five Weekend Sport Stories...
This weekend we had the most thrilling game of the Autumn Nations Cup so far, one of the most bizarre [ ... ]
sports
A Core Like Thor And A Chest Like Cavill’s, Five Of The Best...
Superheroes are truly awesome aren’t they? Who hasn’t watched all the Marvel movies and [ ... ]
sports
The Enormocast Is The Vertigo-Defying Climbing Podcast That...
If you’re struggling to prevent climbing up the walls at the moment, you could do worse than divert [ ... ]
sports
Ross Edgley Ran A Marathon Pulling A MINI, He’s The Fitness...
It’s rarely been as important to stay both physically and mentally healthy but finding the right [ ... ]
sports
‘One World’ Is An Ode To Snowboarding, The Most Exhilarating...
Darting and gliding like swallows, revelling in the spray of the dove-white surf, it’s hard to [ ... ]
sports
Manchester United Ladies Stay Unbeaten, Five Weekend Stories...
We’re calling it now, that was the best weekend of sport this side of the pandemic. From Lewis [ ... ]
sports
Get Your HIIT On With These Five Intense Workouts From Home
We’re not going to lie - 2020 has been intense. Who needs more intensity? Well, it turns out that’s [ ... ]
sports
The Hulk To ‘The Mountain’, Five Monster Moments From The World’s...
Since its debut in 1977, The World’s Strongest Man has become a beloved spectacle to hundreds [ ... ]
sports
Tyson vs Holyfield III? Five Weekend Sports Stories You May...
Mike Tyson and Evander Holyfield could be about to take us back in time, while the Wallabies made a [ ... ]
sports
The Adventure Sports Podcast Is An Aladdin’s Cave Of All Things...
The 19-year-old who cycled across America. Eleven years at sea on a 53 foot Ketch. Kayaking the Amazon [ ... ]
sports
We Need Ron Back And Other Lessons Learned From Sky’s Race To...
And so Sky’s epic F1 documentary series, Race To Perfection thunders to a close. The last six [ ... ]
sports
Khabib Retires, Stokes Hits Huge 100 - The Five Stories You...
Beyond the Brits making history in Formula 1 and cycling there were successes for England in the Women’s [ ... ]
sports
Nadal's £4.5m Catamaran And McGregor's £2.7M Lambo Join The...
Elite sports stars have a fair amount of excess dough. No this isn’t another Bake Off mishap, [ ... ]
sports
Ref Card Chaos, Brave All Blacks And Baseball Drama Are The...
The All Blacks continue their stranglehold over Australia, Newcastle fans found a unique way to protest [ ... ]
sports
Survival of the Fittest: The Athletes To Look Out For At The...
Ready to feel really, really bad about yourself? You may enjoy your morning jog, you may even be proud [ ... ]
sports
Passionate, Positive And Personal - Eddie Hearn’s Podcast Is...
He’s now as popular, big, and perhaps as bombastic as the boxers he promotes. Eddie Hearn is also [ ... ]
sports
PEAR, Peloton & Punisher: Have Time And Energy To Burn With...
If your phone is anything like ours, you’re likely to get lost through the plethora of apps you’ve [ ... ]
sports
Tyson Fury Won't Fight Wilder Next, Five Weekend Stories You...
Boxing’s heavyweight division has been rocked by some huge news regarding an all-British unification [ ... ]
sports
At Last! A Social Platform For All Things Fitness, Say Hello...
A new dawn is on the horizon. The online fitness revolution that has gripped us since the beginning [ ... ]
sports
The Essential Equipment That Will Turn Your Humble Home Into...
It looks like we’re going to be stuck inside for the foreseeable future and for some of us that [ ... ]