Nearly every football club has showed off their new kits for the forthcoming season sparking a flurry of articles trying to rank them from best to worst.

There have been some triumphs - Arsenal’s much-heralded return to adidas and West Ham’s 1980 inspired kits from Umbro for example - but also some tragedies like Manchester’s United’s beige away. But look further down the football ladder and there are some gems which won’t be filling the rails in your local Sports Direct. We thought it was time the spotlight was turned on some beauties you may have missed.

Sportswear aficionado and author Neal Heard was again given the task of designing his beloved Newport County’s kits for the new campaign. He has kitted them out in two absolute belters - home and away both “sponsored but unsponsored” by Paddy Power.

Heard told the club’s website: “Lots of the big clubs are going back to the old, retro classical designs of kits from the past like Nigeria and Arsenal’s bruised banana design.

“Hull have also gone back, Derby County as well. “I really liked the new-look design, but at the same time I didn’t want to offend any of our fan base and go away from any traditional County colours. I think this marries the two together and is the best of both worlds.” 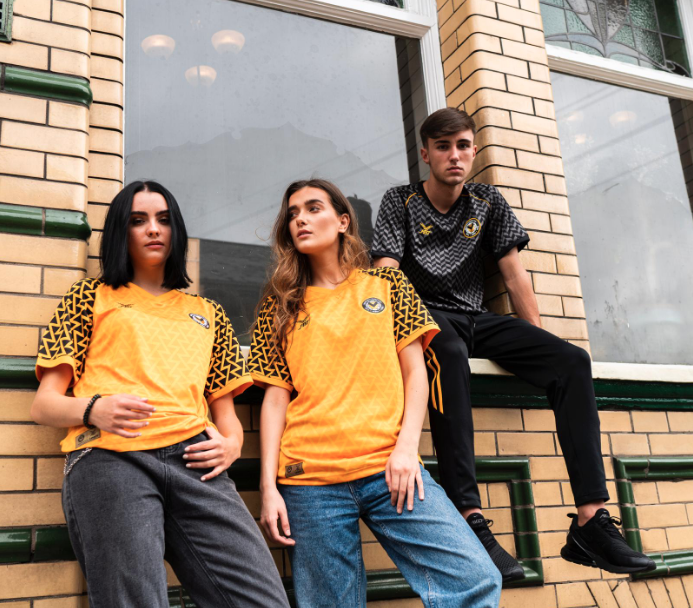 Irish sportswear giants O’Neills have established a foothold in England in recent years as one of the most in-demand suppliers of rugby league kits for clubs including St Helens and Warrington Wolves.

They’ve made inroads in football too with Wycombe Wanderers and this season they’re supplying Hartlepool United. The home kit is a dashing blue number but we want to talk about the goalkeeper kit - a head-turning yellow jersey with sleeves like the curtains you might have found in a teenage girl’s bedroom in the 1980s.

Hartlepool United FC
@Official_HUFC
We had a great laugh at the photo shoot for our new home kit earlier this week - take a look behind the scenes here now...
#Pools
9
53

Danish brand Hummel have taken over the Coventry kit deal after a lengthy absence and they have marked the reunion with two kits which give a knowing nod back to the 1980s. This news was greeted with delight by fans of the Sky Blues after a few years wearing Nike templates.

While not a complete copy of one of the club’s most memorable designs, it is a joyous blend of old and new which has delighted fans in a difficult summer for the club which has seen them relocate to Birmingham. 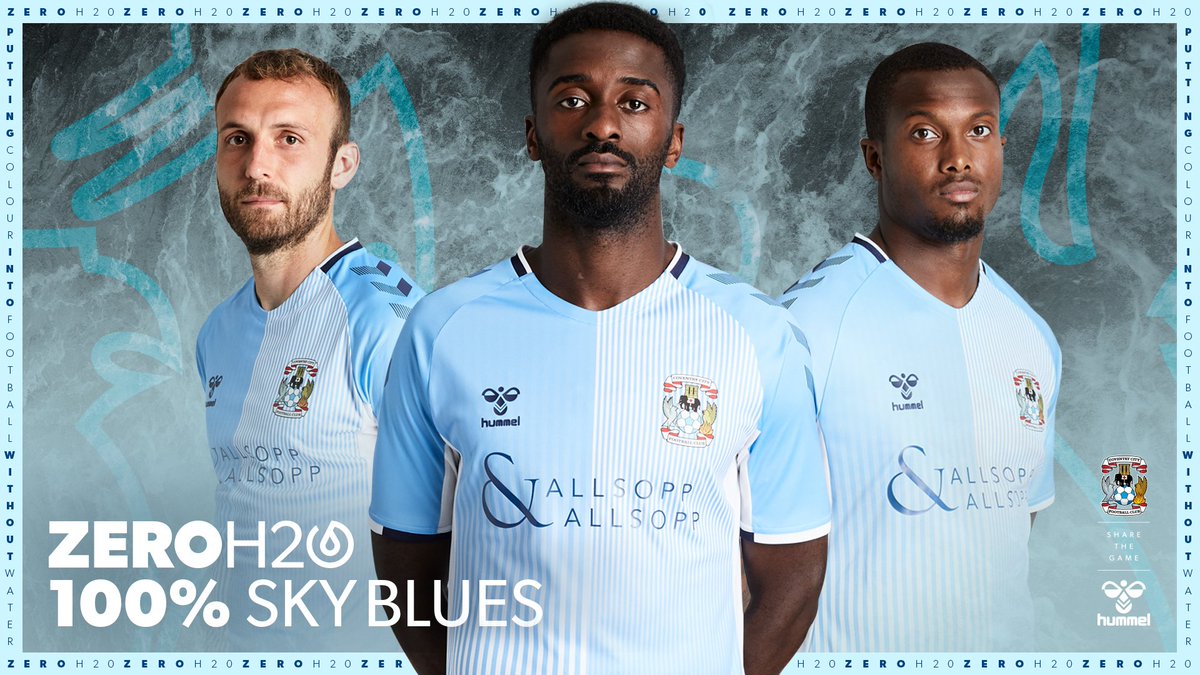 It’d be easy for me to say the Puma designers are as mad as Hatters for coming up with this bold third kit. A dark blue with pink chequerboard effect, this shirt is destined to be filed under cult classics. One wonders what their most famous fan - the late, great Eric Morecambe - would have made of such an outlandish shirt.

Luton Town FC
@LutonTown
👕 NAVY KIT | Our 19/20 Third Kit is available in-store and online pick up yours in time for your summer holidays!
👉 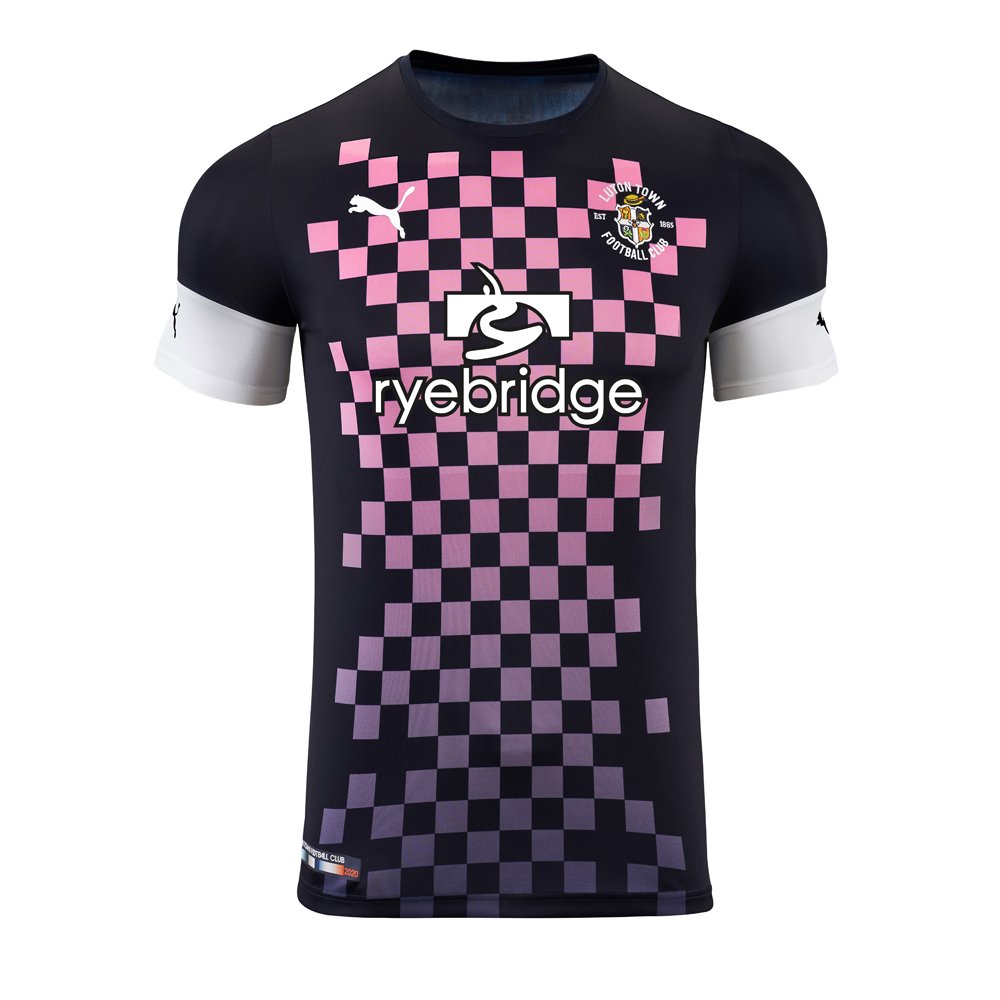 As we've established, Hummel love to delve into their archives and they have resurrected a classic Boro kit from the 1980s, using white lines across the chess which increase in width. The 32 Red sponsor doesn’t detract from a very classy design and the away choice - white with a red and blue band across the chest is not too shabby either. 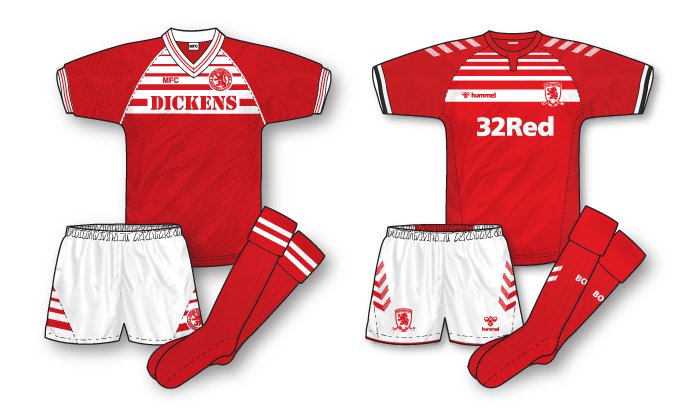 Hummel flicked through the history books for the inspiration for Cambridge’s away kit and came up with a new twist on a design from 1993/94, featuring blue stripes which from a distance look like the latter stages of a game of Tetris.

Cambridge United FC
@CambridgeUtdFC
😍 We'll be playing in this for the FIRST TIME today...
This is not a drill!
#CamUTD 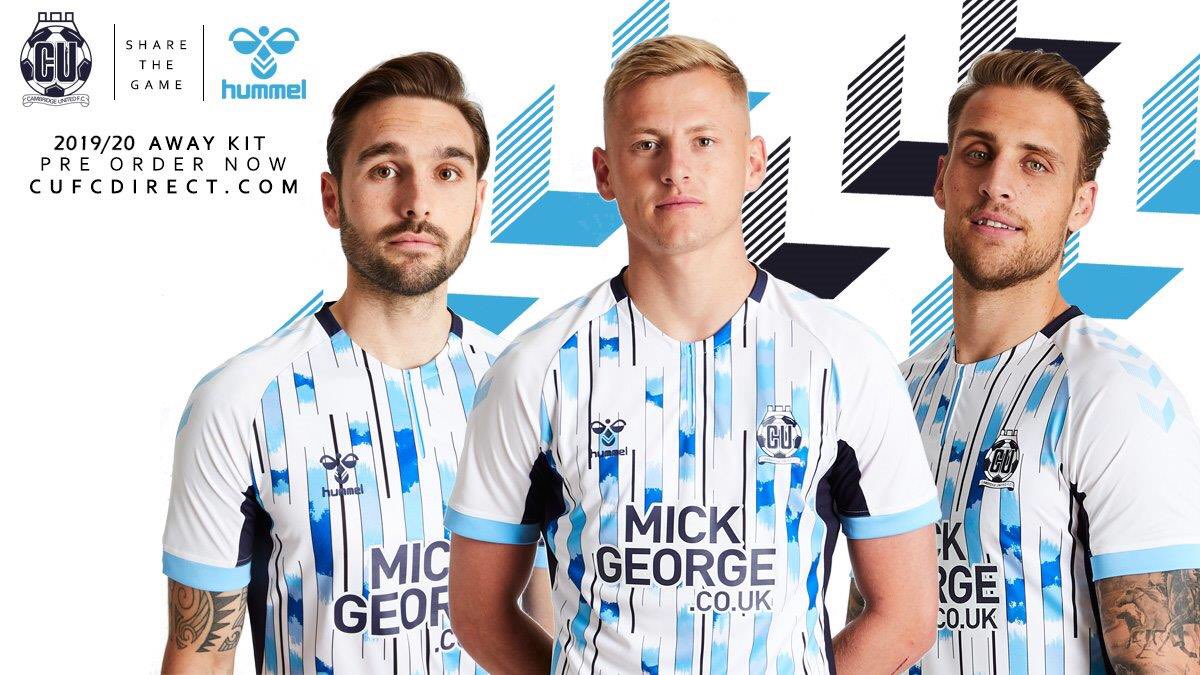 A striking azure kit from Errea, Cheltenham’s third kit will look great in the summer. The club says the colour is inspired by the town’s coat of arms and it represents the town’s spa waters.

In a year when Juventus famously (foolishly) chose halves over traditional stripes, Grimsby have shown that when done well, nothing looks classier than black and white stripes. Nicely finished off with an old-school collar and a black fade, this Errea effort is on point.

Grimsby Town FC
@officialgtfc
SHIRT LAUNCH WEEKEND NOW LIVE!
We are open 9am - 2pm today for you to get your 2019/20 replica kits, new trainingwear and season tickets!
All items are also available online using the link below 👇 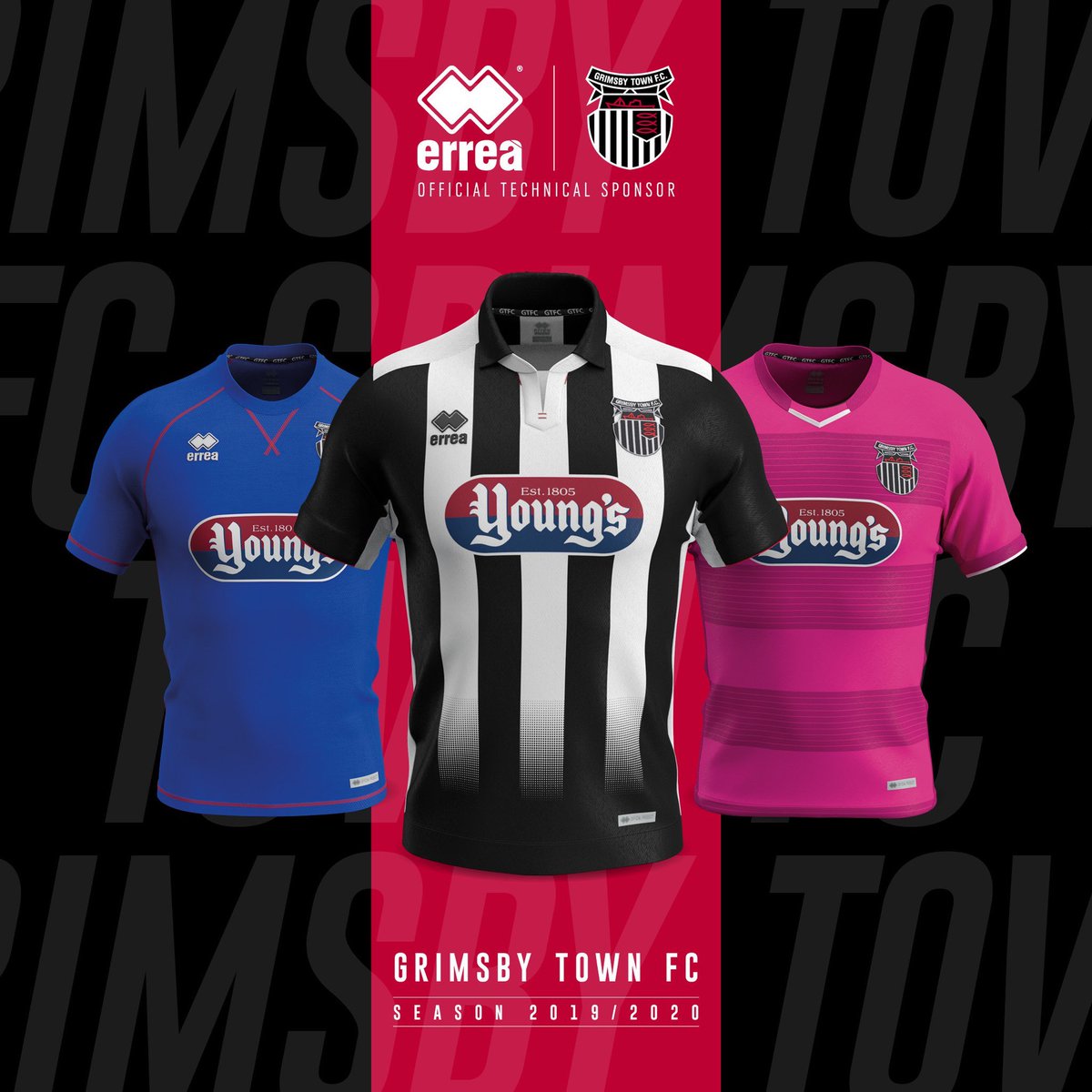 The Pilgrims rarely stray too far from their famous green colours and both their away and third kits are worthy of closer investigation. The away kit, a spiral affair by Puma which looks like a lime ice cream sundae, gets our vote here. 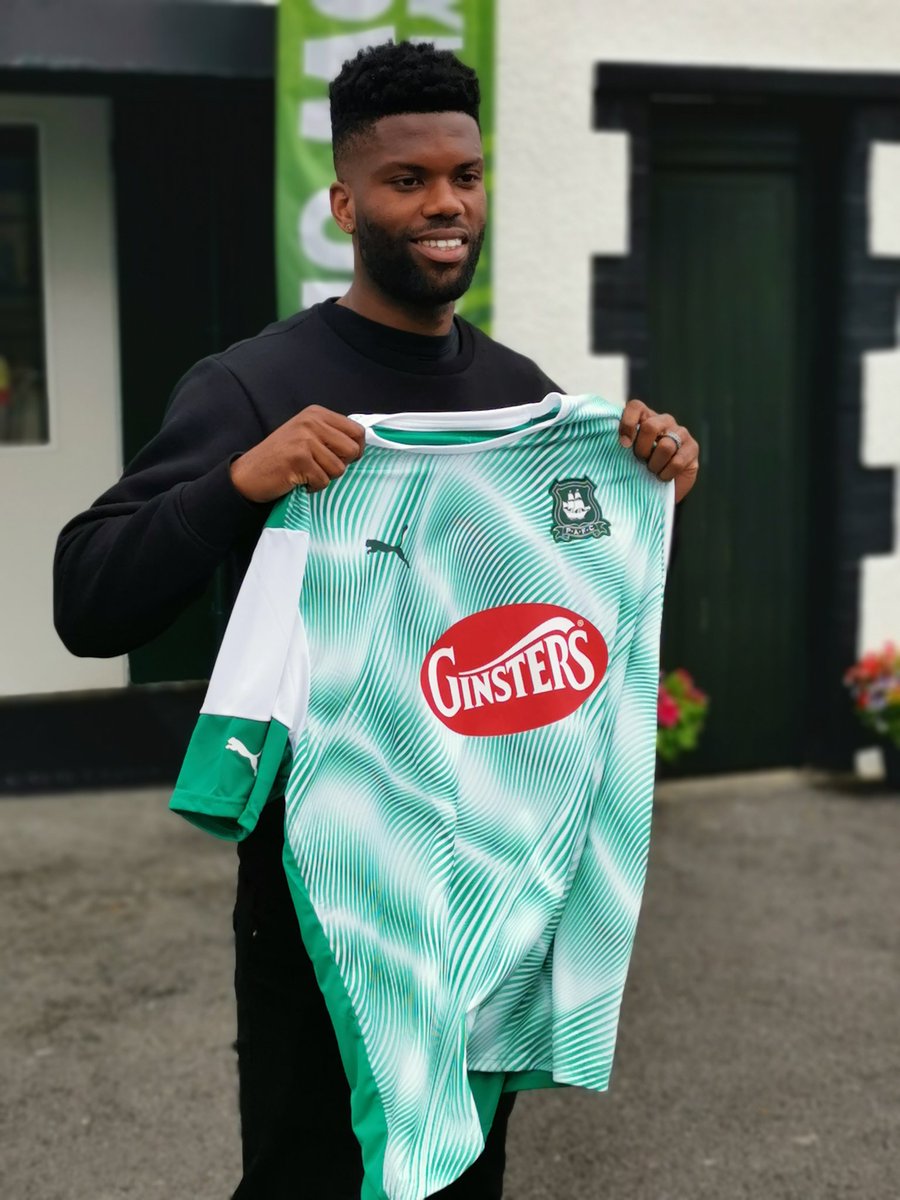 You can’t avoid the Burger King logo on Stevenage’s new Macron kits and the home effort - narrow red and white stripes - is quite an eye burner. But the away kit manages to take the colours from the takeaway’s logo and it actually works pretty well. 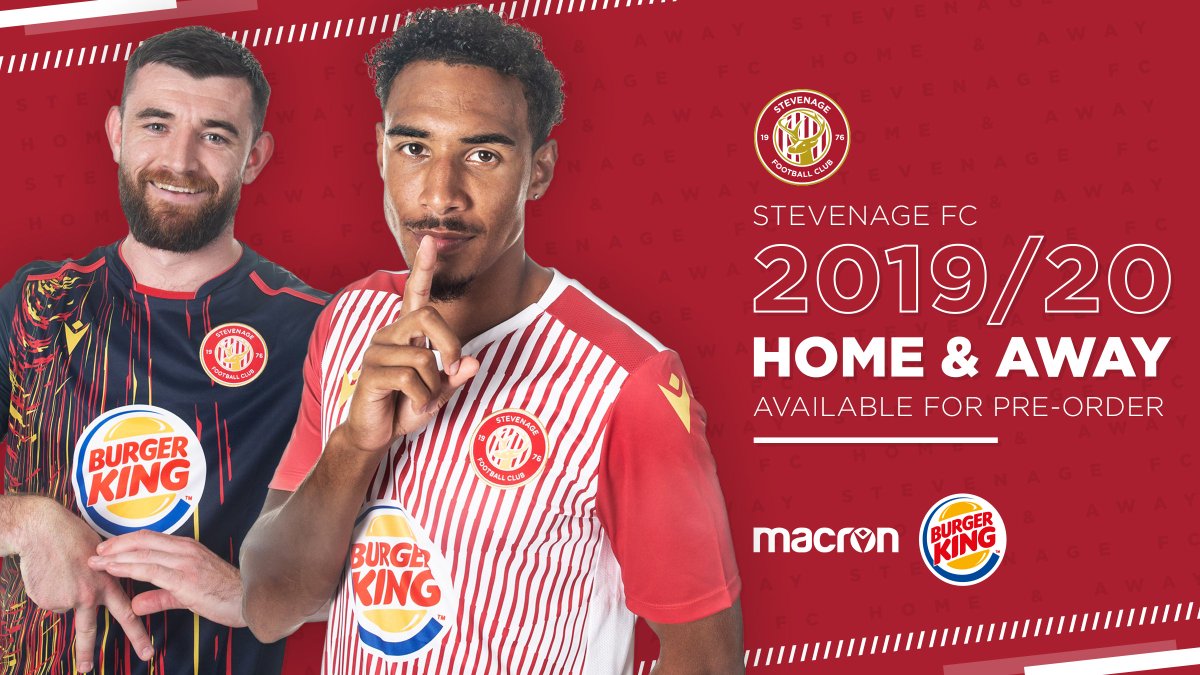 The Lancashire club have let Macron off the leash for their home kit which while predominately red has a dazzling criss-cross Tron sublimation though the neck could have done with some work. 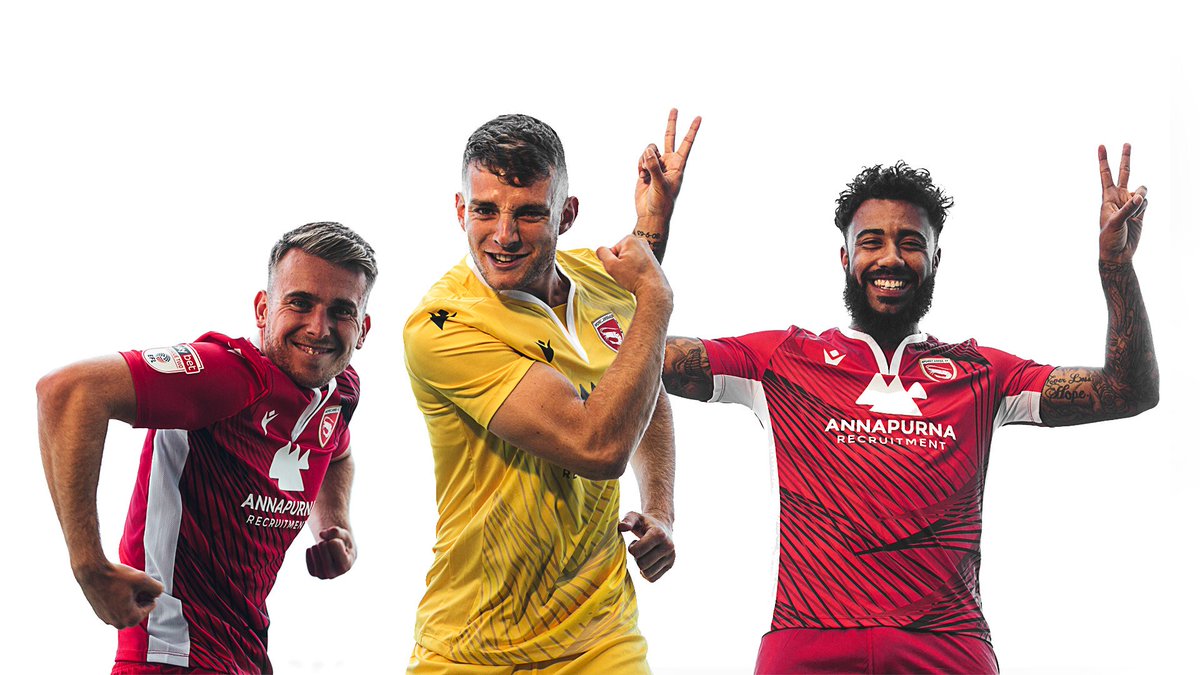 8
35
More
football
Book Review - King Eric: Portrait Of The Artist Who Changed...
Leeds. Irwin. £1million. Title. Double. Palace. Kick. Ban. Seagulls. Return. Liverpool. Double. [ ... ]
football
Replacing Rapinoe And Morgan? The Ladies Who Can Light Up The...
Write off 2020. The best thing about it is remembering how good 2019 actually was. One of the undeniable [ ... ]
football
Wembley Woe: When England Lost To Germany At Euro ‘96
In the summer of 1990 England tasted their first ever penalty shootout heartbreak when they went out [ ... ]
football
Get Ready For A Nostalgia-Fest With Italia '90 Podcast Vincerà!
Hosted by Mark Godfrey and running from June 8th to July 8th, Vincerà! is a 24-part podcast series [ ... ]
football
Harry's Heroes, Vinnie Jones And Revenge At The Battle Of San...
When Vinnie Jones started crunching San Marino players left, right and centre, it was clear the friendly [ ... ]
football
Prodigal Talent Of The German Game Is Turning RB Leipzig Into...
This article first appeared in The Sportsman on 07/12/19 What were you doing at the age of 28? If it [ ... ]
football
''I Was Really Wasted'': When Jurgen Klopp Woke Up Hungover...
This article first appeared in The Sportsman on 05/09/19 Anyone watching the Amazon Prime documentary [ ... ]
football
Book Review - Yer Joking Aren't Ya?: The Story Of Middlesbrough's...
In 1997, Middlesbrough Football Club reached the finals of both the League and FA Cup, had the might [ ... ]
football
Carragher's Brilliant Podcast Shows The Greatest Games Are The...
What’s the greatest football game you’ve ever seen?  Jamie Carragher doesn’t [ ... ]
football
Red Bull And The Football Training Centre Of The Future... Today!
It is now 33 years since Red Bull sold its first ever energy drink. Pre-April Fool’s Day 1987 [ ... ]
football
On This Day Messi's Barcelona Tally Hits 500 In El Clásico Triumph
If you’re going to hit a milestone, and one that no one in your club’s illustrious history [ ... ]
football
The Secret Behind The Success Of Lineker, Shearer And Wright's...
The unavoidable hiatus to the broadcast of the BBC’s flagship football programme will not deny [ ... ]
football
Neymar Jr... Junior! Santos Like The Look Of Ronaldo-Imitating...
On March 7 2009, a slightly-built 17-year-old from Mogi das Cruzes, São Paulo, walked out onto [ ... ]
football
Business As Usual: A Beginners Guide To The Belarus Premier...
If you’re going out of your mind without your football fix, well we’re sorry you just haven’t [ ... ]
football
Why June 30 Could Be D-Day For The Fate Of Premier League Season
England captain Harry Kane has added his voice to the growing calls for the Premier League season to [ ... ]
football
You Heard It Here First - Brescia's Sandro Tonali Is Italy's...
Since winning the World Cup in 2006, it has been turbulent time on the international stage for Italy. [ ... ]
football
A Reunion With Ancelotti Could Resurrect Rodriguez's Stuttering...
No club chews up and spits out world class players quite like Real Madrid. Yet, their sense of entitlement, [ ... ]
football
'Quickly Kevin' Is The 90s Football Nostalgia Podcast To Beat...
While the majority of sports podcasts scramble to fill the minutes within the disruption of the [ ... ]
football
Where Did It All Go Wrong For Phil Neville And The Lionesses?
Winning, Phil Neville recently said at the SheBelieves Cup, is what would bring England’s women [ ... ]
football
''Drop A Few Hand Grenades'' Keegan's Advice To Scholesy The...
A packed out Wembley roared like one of those indomitable Three Lions to greet England’s new messiah. [ ... ]
football
Rise Of The Couch Coach: Coronavirus Causes 119% Surge In Football...
Thousands of us are flocking to virtual reality and gaming to help fill the void of no live football, [ ... ]
football
Review: Diego Maradona - Drop Yourself Into The Great's Chaotic...
When Diego Armando Maradona arrived at Napoli in 1984 for a world-record fee, the entire city ground [ ... ]
football
Arsenal's Tough Choice - Is Donyell Malen The Ying To Aubameyang?
Arsenal’s inability to manage the contractual situations of their biggest stars has plagued them [ ... ]
football
Robbie Fowler Is Making His Mark As A Manager With Brisbane...
The curtains came down on one of the last bastions of football standing in 2020 this week. Before the [ ... ]
football
Long Live The King: Eric Will Always Be Manchester United's...
“If ever there was one player, anywhere in the world, that was made for Manchester United, it [ ... ]
football
I Was There - The Day Football Came Home To Wembley
The closest I ever got to attending the original Wembley Stadium was on its final day in operation in [ ... ]
football
'Sunderland Til I Die' Heads To The Boardroom In Netflix's Second...
The docks have been left deserted. The wealth has dried up. Wearside has become an impoverished place [ ... ]
football
How Chief Creator Silva Became New Face Of Premier League
Football has been cast into uncertainty by the coronavirus pandemic. As it stands, nobody is sure if [ ... ]
football
Lookback:Chelsea 6-0 Arsenal When Arsene's 1000th Game Went...
It was supposed to be an occasion to celebrate for Arsene Wenger, but his 1000th game in charge of Arsenal [ ... ]
football
Ronaldo, Kane, Hazard - The Winners And Losers Of Euro 2020...
So as of this week Euro 2020 became Euro 2021. Another casualty of the global Coronavirus epidemic. [ ... ]
This website uses cookies
Cookies help us and our partners provide statistics. By browsing this website, you consent to the use of cookies in accordance with our Privacy Policy and Cookies Policy.
Accept & Close