Most sporting rivalries can be linked back to postcode proximity, or to a single, shared moment in both clubs histories. On Thursday night however, we get the latest renewal of grudge that has been brought to the simmer only recently, from a fixture that keeps throwing up absolute classics.

There may not be the visceral electricity generated by visiting fans and partisan locals, or the dangling carrot of local bragging rights on the line. But when St Helens & Catalans Dragons kick off the 2022 Betfred Super League season in a rematch of last year's Grand Final, we’re promised a showdown between two teams that have quite simply been better than everyone else in Northern Hemisphere Rugby League in the last 12 months.

It was the Saints who came out on top in October, in a Grand Final that fizzed and crackled from minute one, to claim their third title in a row. In many ways, it was an achievement for the French side just to be there at Old Trafford, in their first ever visit to the ‘Big Dance’. But no doubt they will still have that lingering taste of what might have been.

You only have to roll the clock back another month to get to one of the most memorable nights in Betfred Super League history.

Magic Weekend. Newcastle. 76 minutes on the clock. Catalans were dead and buried, St Helens were 18 points ahead, and it looked as if Le Dracs would have to wait at least another week to get their hands on the league leaders shield. And then all hell broke loose.

Four of the most remarkable minutes of Rugby League later, and Catalans had pulled the game back to Golden Point. Enter stage left Jimmy Maloney. Drop Goal. Delirium.

So fast-forward back to February 2022 and the stage is set for a mouth-watering season opener.

Both teams have lost big-name players in the off season, but both have recruited strongly in equal measure. Mitchell Pearce is the headline act for the Dragons having signed from the Newcastle Knights, whereas for St Helens, the excitement is more perhaps, around their academy products, especially Lewis Dodd and Jack Welsby.

That’s the scary thing about this St Helens side. With players such as Lachlan Coote and Kevin Naiqama moving on after lifting three titles in a row, you’d be forgiven to think that October’s Grand Final win symbolised a book-end on that era of dominance. But they just keep re-inventing themselves.

You’d also be forgiven for thinking that after three consecutive titles, some complacency might start to slip in, but Head Coach Kristian Woolf doesn’t see this being as issue, as he explains;

“We’ve got plenty of improvement in us. We need to make sure we still have that hunger in us. The things that have made us really successful over the last couple of years is how hard this group want to work, how consistent they want to be, and how hard they want to compete, and that comes with a real hunger to be the best and want to compete hard all the time. From everything we’ve seen in pre-season, we’ve still got that.” 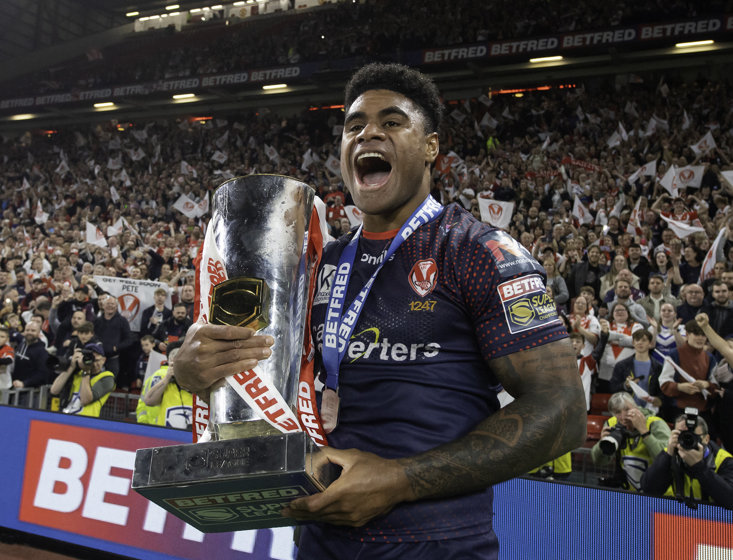 It's been a strange couple of years for Woolf as a Head Coach since taking over in 2020. His first season in charge was only a few weeks old when the pandemic struck, and he’s spent much of his tenure at the Totally Wicked Stadium overseeing his side in empty stadiums, with crowds only returning halfway through last season.

With that in mind, it’s no surprise that he relishing the chance to be part of a game that has all the ingredients of another classic on Thursday;

We’ve had a long time out of footy, we’ve had a long tough pre-season and our blokes have worked really hard. You want nothing more than a real challenging game against the next best in the competition and really go out and butt-heads in an exciting game.”

For all the talk about St Helens and potential four-peats, there is equal intrigue around the Dragons. The French side had been the model of inconsistency years, always threatening but never following through.

Under Steve McNamara however, things feel different. There is a sense of steady progress surrounding the club. Following their first trophy in 2018, the League Leaders Shield & Grand Final appearance followed, the former England Coach is confident that his side are well position to challenge at the top again;

“The three players we have recruited have all won NRL Grand Finals and been involved in the top end games. They’ve seen it, they’ve felt it, they’ve smelt it. They know what it takes to actually get there which is the main thing.

Getting there and winning is important, but for clubs to understand how to get there first and foremost is important.”

It’s a long, long stretch until we can start realistically talking about Old Trafford, and who may or may not be there in September, but it would be a brave man to suggest that either of the two sides involved Thursday won’t be in the mix.

On paper? St Helens are favourites, just about. They’ve got enough muscle memory and star quality to ensure that tag against every team this season. Players like Roby, Walmsley and Makinson have all been there, done it, got multiple t-shirts. They certainly won’t be phased by the prospect of Catalans on opening night.

That said, write the French off at your peril. They are stacked with top-end talent themselves. Pearce is joined by the likes of current Man Of Steel Sam Tomkins, and fellow new signings Dylan Napa and Tyrone May. These players are more than capable of match winning moments, and given the events of last season, Saints fans won’t feel like the game is won until the whistle has blown, and the two points are firmly in Kristian Woolf’s top pocket.

Opening night is always exciting. Just having the Betfred Super League back in our lives is a strange, thrilling relief, but you could play this game on any night of the year, and it would still have the feeling of a huge Rugby League spectacle. I have absolutely no doubt it will deliver.