We are deep into June and that can only mean one thing, Wimbledon is just around the corner and the Championships get underway next week.

The green grass courts, the strawberries and cream and incredible athletes are set to return this summer after Covid-19 cancelled last year’s Championship. Three-time Grand Slam winner Andy Murray is set to take to the hallowed grass at the All England Club in the men’s singles for the first time since 2017, his last tournament appearance came in 2019 when he played in the mixed doubles with 23-time Grand Slam winner Serena Williams.

Murray’s return to Queen’s earlier this month was an emotional affair and it is expected his return to Wimbledon could be just as overwhelming. Murray’s return has been highly anticipated and fans cannot wait to see him back in action.

This year marks a piece of history at Wimbledon as Britain has three seeds in the singles draws for the first time in 43 years. Here is a look at Britain’s biggest hopes of glory at Wimbledon 2021…

As already mentioned, Britain’s former number one, who needed a wildcard to part in this year's men’s event, will be taking to the men’s singles at Wimbledon for the first time since 2017.

His hip has always caused him serious pain and has hindered him from playing to his full potential and he had an operation in the hope of sorting his ‘achilles heel’. His mixed doubles campaign with Williams two years ago was a way of the Scotsman getting back into routine in recovering from the operation.

Without Rafeal Nadal, Andy Murray’s chances seem higher but he still has to contend with two other greats of the sport in Roger Federer and Novak Djokovic.

Following his impressive run to the final at Queen’s last weekend, Norrie was seeded for Wimbledon for the first time in his career. The Brit was hoping to become only the second Briton after Andy Murray to win the Queen’s title in the Open era but he was defeated 6-4 -6-7 6-3 by Matteo Berrettini in his first grass-court final on Sunday. 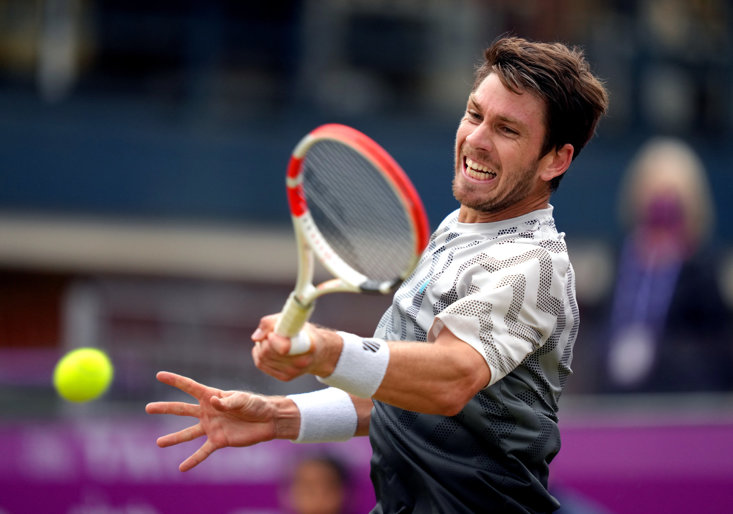 Norrie, also a runner-up in Estoril and Lyon last month, will be looking to make an impact at Wimbledon having been seeded for the draw and he will hope to carry the momentum that got him all the way to the final at Queen’s into this Championship.

The current British number one was selected by 20-time Grand Slam winner Federer to be his sparring partner in preparation for Wimbledon.

After exiting Queen’s at the quarter-finals stage, Evans insisted he was happy with his Wimbledon preparation. His best results at the Championships came in 2016 and 2019 when he reached the third round and he will be eager to progress further this year. His preparation with a great like Federer will only boost his chances.

The British women’s number one will be fighting hard to reach the Wimbledon final for the first time in her career. 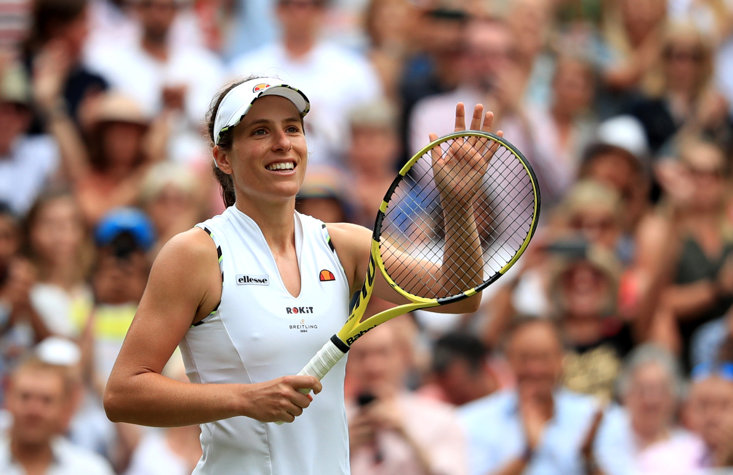 The 30-year-old has reached the semi-finals and quarter-finals in two of her last three appearances at the All England Club but the second half of 2019 saw her sidelined with a problem in her right knee, and she has struggled for a good run of form since.

She will be coming into the tournament positive, though. This is because she won her first tournament in four years a couple of weeks ago in Nottingham, albeit in a relatively weak field.

x
Suggested Searches:
The Sportsman
Manchester United
Liverpool
Manchester City
Premier League
More
tennis
Jo Konta Backs Emma Raducanu To Cope With Intense Spotlight
Former British No1 Jo Konta has backed teenager Emma Raducanu to cope with the ever more fierce spotlight [ ... ]
tennis
Wimbledon 2022 Draw: Andy Murray Begins Campaign Against World...
Andy Murray will open up his bid for a third Wimbledon singles title on Monday against the world No70 [ ... ]
tennis
The Wimbledon Miracle: When 250-1 Wildcard Goran Ivanisevic...
When Goran Ivanisevic brought the Centre Court house down on ‘People’s Monday’ in [ ... ]
tennis
Serena Williams' Winning Return Raises Hopes Of Wimbledon Wildcard...
Almost exactly a year after departing the Centre Court at Wimbledon in agony and tears after withdrawing [ ... ]
tennis
Boulter Downs Wimbledon Finalist Pliskova For First Career Win...
It was just about as Serena Williams was hitting up with new doubles opponent Ons Jabeur on an outside [ ... ]
tennis
Wimbledon Centre Court: How Can I Get Tickets And What’s The...
When it comes to the summer spectacle that is the Wimbledon Championships, most tickets are like gold [ ... ]
tennis
Andy Murray Still An Inspiration, Says British No1 Cameron Norrie...
Andy Murray remains a huge inspiration to the rest of the British tennis pack according to current UK [ ... ]
tennis
Ons Jabeur: They're All Jealous Of Me Playing Doubles With Serena...
As Serena Williams rocks up in sunny, sleepy Eastbourne this week, arguably the sport’s greatest [ ... ]
tennis
Why Berrettini Is Heading To Wimbledon Better Prepared To Become...
History looks set to be repeating itself this summer as Matteo Berrettini has retained his Queen’s [ ... ]
tennis
Who Is Casper Ruud? Wimbledon's Number Three Seed Who Says ''Grass...
23-year-old Casper Ruud, for some, has lived up to his name ahead of Wimbledon. The number three seed, [ ... ]
tennis
Everything You Need To Know Ahead Of The Queen's Club Championship...
The grass court season is well underway and while we find ourselves counting down the days until Wimbledon [ ... ]
tennis
Should Nick Kyrgios Give Ronnie O’Sullivan’s Saviour Steve Peters...
Is it too late for Nick Kyrgios to be remembered by tennis as anything other than a petulant and obnoxious [ ... ]
tennis
Andy Murray's Wimbledon Hopes In Doubt After Hip Injury Flares...
It was meant to be the first real high since his injury crisis. Instead, at the Stuttgart Open final, [ ... ]
tennis
Mixed Doubles Partnership With Murray Could Be Just What Raducanu...
Emma Raducanu’s participation in this year’s Wimbledon Championships are in doubt after [ ... ]
tennis
Rafael Nadal And The Sport Stars That Achieved Victory In Spite...
Rafael Nadal has done it again. The King of Clay has collected his 14th major title at Roland Garros [ ... ]
tennis
King Of Clay Is Here To Stay: Rafael Nadal Beats Casper Ruud...
The teacher defeated the student, as the most prolific French Open winner of all-time clinched another [ ... ]
tennis
Untouchable Iga Swiatek Dominates Coco Gauff To Win Second French...
21-year-old Iga Swiatek is now a two-time French Open champion after an imperious 6-1,6-3 win over American [ ... ]
tennis
'Watford-esque' Raducanu Needs To Find Stability To Become A...
John Lloyd has urged new British tennis star Emma Raducanu to avoid the pitfalls he experienced [ ... ]
tennis
British Star Cameron Norrie Wins First ATP Title On Clay Ahead...
Cameron Norrie saw his preparations for the French Open come together perfectly by winning his [ ... ]
tennis
Wimbledon Faces Major Dilemma As WTA And ATP Withdraw Rankings...
Unless there are further seismic developments in the weeks to come, this year’s Wimbledon Championships [ ... ]
tennis
End Of An Era For British Women's Tennis As Robson Joins Konta...
As they say, nothing lasts forever, and in sport careers come and go in the blink of an eye. On Monday, [ ... ]
tennis
Everything You Need To Know About The 2022 French Open As Djokovic...
The French Open is here and the qualifiers have begun for the second Grand Slam tournament of the year. [ ... ]
tennis
Rafael Nadal's Ten Most Career-Defining Wins Ahead Of Seismic...
As Rafael Nadal continues his build-up for the French Open, where he will attempt to extend two huge [ ... ]
tennis
Can Alcaraz Follow In Compatriot Nadal's Footsteps And Dominate...
The French Open is just around the corner and after falling at the semi-final stage last year, everyone [ ... ]
tennis
Andy Murray v Novak Djokovic: The Great Battle Resumes After...
It has been five years in the making. Andy Murray and Novak Djokovic go to battle once again on Thursday [ ... ]
tennis
British Stars Enjoy Positive Start To Madrid Open
It has been a fine start for British talent in the Madrid Open this week with Emma Raducanu, Dan Evans, [ ... ]
tennis
Can Croatia’s Junior Sensation Petra Marcinko Follow World No1...
A quick glance at the roll call of honour of junior girls Grand Slam winners is enough to show it is [ ... ]
tennis
Emma Raducanu Needs The Freedom To Develop At Her Own Pace
Change is a thing of nature, it happens all the time and sport is no different. For teams, players come [ ... ]
tennis
Outspoken Novak Djokovic Is In Danger Of Following In Margaret...
‘Sometimes the wise man says nothing at all’ Novak Djokovic could learn to take this advice [ ... ]
tennis
British Tennis Is In Safe Hands As Cameron Norrie Breaks Top...
Emma Raducanu’s US Open triumph in September was a monumental piece of British sporting history [ ... ]