Football
News
The Club that Never Was: The Story of the Thames Valley Royals
Matthew Crist
15:29, 23 Nov 2017

In the spring of 1983 media mogul and occasional football chairman Robert Maxwell announced a daring plan which, if it had gone ahead, would have changed the football landscape forever while depriving two sets of fans of watching the clubs they had grown-up supporting all of their lives.

That April without any prior warning and to everyone’s amazement Maxwell, the then owner of Oxford United, told the BBC that he was on the verge of taking a controlling interest in nearby Reading, prior to merging the two clubs and creating a new superclub which would go by the name of the Thames Valley Royals.

At the time Maxwell was something of a saviour among United’s fans having bought them in 1982, saving them from almost certain bankruptcy as a result; but the club was far from secure and still found themselves haemorrhaging money at a time when gates were low and football was far from the well-oiled money-making machine that it is today.

Meanwhile, some 25 miles down the A34 Reading also found themselves struggling in the old Third Division playing in front of just a couple of thousand people each week and to a businessman such as Robert Maxwell there seemed only one feasible option.

The thing was, Maxwell wasn’t a football person. He was a businessman who enjoyed the adulation that being involved in the game brought with it and he saw a simple solution to the predicament: there are two clubs struggling within a 30 minute drive of each other, why not merge them?

The problem with this plan was, Maxwell hadn’t even thought to discuss his big idea with the then Oxford United boss Jim Smith, so when news broke of the proposed merger,  panic set in and questions were soon being asked. "Your first thought is, 'Am I going to have a job?'," Smith later told the BBC on remembering his emotions at the time. "But that was soon guaranteed by Mr Maxwell. Then all hell broke loose."

But assurances to the manager did nothing to ease the tension among the players who now faced the prospect of not just fighting for a first-team place among a squad of 24 players, more like a playing roster of 40 plus professionals.

“I had a hard enough job getting into the team as it was,” recalls former United midfielder Mark Wood. “Now there was going to be another squad of players but Jim Smith then went on to say: 'We're only doing it so we can buy Reading striker Kerry Dixon. All your places are safe."

Just a week after Maxwell's earth-shattering announcement, Oxford fans organised a mass protest at the club’s Manor Ground prior to the home game against Wigan Athletic as thousands delayed kick off for over 30 minutes by staging a sit-down protest in the centre circle.

Adamant his plan would go ahead Maxwell looked on from the director’s box safely out of reach of the fans’ anger but not out of earshot and on a BBC radio phone-in a week later he made his feelings clear about the unhappy supporters. "If they want to become supporters of someone else, they're entirely welcome," he said. "If the deal does not go through, both Reading and Oxford will be dead before the beginning of next season.”

Fortunately for both sets of fans the Thames Valley Royals never did materialise, but not due to supporter protests or a lack of willingness from both parties; rather a technicality which prevented the official merger of both clubs when eagle-eyed local businessman and former Reading player Roger Smee, who was vehemently against the merger, spotted a discrepancy in the club’s books.

He noticed that Reading had issued shares the previous year that had been authorised in annual general meetings but were yet to be issued, meaning the Reading board effectively had no majority and were unable to legally approve a takeover from Oxford United or anyone else for that matter.

"I was probably the only person in the world who at that point thought: 'That's unusual. A year ago they didn't have a majority, so how on earth have they issued these shares to themselves while Reading was a public company?’” he told the BBC “’That would be against the law.'"

Reading Chairman Frank Waller was promptly handed a High Court injunction forbidding the sale of the unissued shares and on the 22nd of April, as the two parties met to announce the official merger they were told of the news that the deal could no longer go ahead, leading to red faces all round.

Calling the matter merely a “side show” Maxwell attempted to push the deal through regardless, making his own private offer to Reading shareholders, but the deal was declined and as a result Waller, along with club directors Leslie Davies and John Briggs were left with no option but to quit the club as Reading and Oxford survived to fight another day as two proud football clubs; representing two separate communities with their own identities who, to this day, remain fierce local rivals. 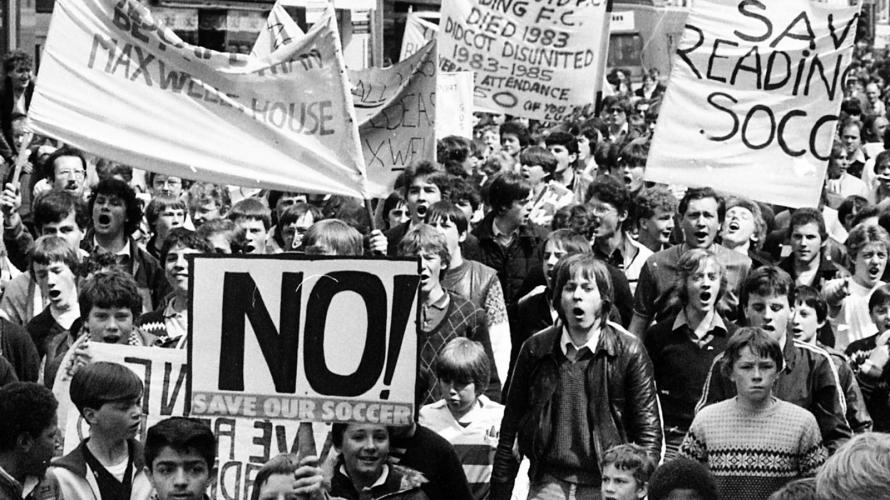 Protests against the Thames Valley Royals
x
Suggested Searches:
Tyson Fury
Manchester United
Marcus Rashford
Lewis Hamilton
F1
Air Jordan
More
football
No Special Treatment, Big Six That Agreed To European Super...
As the dust begins to settle on the wreckage that is now the European Super League, fans and players [ ... ]
football
Man City v Chelsea: ‘Yin And Yang’ Kirby And Kerr Are Taking...
Manchester City host Chelsea on Wednesday night as first take on second in the Women’s Super League, [ ... ]
football
Chelsea 0-0 Brighton Was Tedious But At Least The Premier League...
As Chelsea drew 0-0 at home to Brighton at Stamford Bridge to edge into the top four, it was a game [ ... ]
football
Football Unites To Stop Super League As Ed Woodward Resigns...
The European Super League seems dead in the water. Chelsea are reportedly looking to pull out, as are [ ... ]
football
Ryan Mason And Others Who Became Coaches After Playing Careers...
Ryan Mason will take interim charge of Tottenham when they host Southampton on Wednesday night before [ ... ]
football
Ask The Fans: We Will Never Accept This Chaotic NBA-Style Super...
From fans and pundits to players and managers, it is clear that the vast majority in England are against [ ... ]
football
Premier League Fixtures: Everything You Need To Know Ahead Of...
Three European Super League clubs are in action… sorry, three of the Premier League’s ‘Big [ ... ]
football
European Super League Will Rob Fans But Players Will Pay A Hefty...
‘Football is for the fans’, read the Leeds United t-shirts as they warmed up against Liverpool, [ ... ]
football
Leeds Score Late Leveller To Deny Liverpool Top Four Spot
Leeds will have seemingly had more fans backing them than usual on Monday night when they hosted Liverpool [ ... ]
football
Gary Neville And Jamie Carragher Urge Fans To Come Together...
Jamie Carragher has urged football fans to come together to stop the proposed Super League which has [ ... ]
football
Women's Super League: Title Decider Heads Three Key Games In...
Right, enough of all that other nonsense, here’s a Super League we can all get behind. The WSL [ ... ]
football
Could Man Of The People Jurgen Klopp Leave Liverpool After Super...
Jurgen Klopp has always been a man of the people. Whether you love Liverpool or truly despise them, [ ... ]
football
Jose Mourinho Sacked By Tottenham: Three Key Moments That Led...
Jose Mourinho has been sacked by Tottenham Hotspur less than a week before the League Cup final. He [ ... ]
football
European Super League Explained: Here's Everything We Know So...
Competitive football as we know it is being stolen by the so-called ‘biggest’ clubs in Europe [ ... ]
football
Kelechi Iheanacho Fires Leicester Into FA Cup Final For First...
Kelechi Iheanacho continued his stunning form in front of goal to fire Leicester City into the FA Cup [ ... ]
football
Man United Leave It Late To Beat Burnley As Mason Greenwood...
Manchester United last beat Burnley at Old Trafford back in February 2015 heading into this one. And [ ... ]
football
Fulham Suffer Heartbreaking Blow As Arsenal Score 97th Minute...
Fulham were cruelly denied an historic victory and a massive three points as Arsenal scored an equaliser [ ... ]
football
Leicester FA Cup Triumph Can Offset Top Four Worries And Show...
Leicester are flagging badly but this weekend’s FA Cup semi-final against Southampton could be [ ... ]
football
Chelsea End Man City’s Quad Dreams And Reach Fourth FA Cup Final...
Manchester City’s unprecedented quadruple dream came crashing down on Saturday evening after they [ ... ]
football
Norwich City Seal Fourth Premier League Promotion In A Decade
The Canaries don’t even kick a ball until Saturday evening but thanks to Swansea City and Brentford’s [ ... ]
football
Newcastle United Move Nine Points Clear Of The Drop After Win...
Newcastle United took another step towards securing their safety in the Premier League with a 3-2 win [ ... ]
football
Championship Relegation Battle Analysed: Which Team Has The...
Coventry’s 1-0 at Rotherham on Thursday night felt monumental in the Championship and with Norwich [ ... ]
football
Harry Kane Scores Brace But Spurs Top Four Hopes Are Dented...
Harry Kane continued his glorious scoring form against Everton by netting a brace which put him ahead [ ... ]
football
Everton And Tottenham's Faint Top Four Hopes Dangling On Their...
The games have come thick and fast and now we’re entering the business end of the season where [ ... ]
football
Aidy Boothroyd Sacked: Frank Lampard ''Perfect'' For England...
Aidy Boothroyd has been dismissed as England U21 manager after seven years in the England set-up. After [ ... ]
football
Arsenal Cruise Into Europa League Semis With Commanding Win...
Arsenal cruised into the Europa League semi-finals thanks to a phenomenal first-half performance, beating [ ... ]
football
Manchester City's Quadruple Hopes Enter Decisive Eleven Days...
As Phil Foden rattled in the final goal off the Borussia Dortmund post, it was definitive. Manchester [ ... ]
football
Premier League Fixtures: Everything You Need To Know Ahead Of...
The Premier League is here though we have a fractured programme of fixtures owing to the semi-finals [ ... ]
football
Arsenal's Season Rests On The Europa League And Mikel Arteta...
The most important game of Mikel Arteta’s short managerial career? Quite possibly. The biggest [ ... ]
football
Hillsborough, April 15, 1989: Remembering One Of Football's...
On April 15 1989, a warm, sunny, spring afternoon, Sheffield Wednesday’s Hillsborough stadium [ ... ]