Detained and then isolated at Melbourne Airport on arrival from the Middle East, Novak Djokovic has had time to contemplate and reflect during his high-profile predicament.

The Serbian has had his visa cancelled for failing to provide appropriate evidence to meet entry requirements and is facing deportation. He had been given a vaccine exemption to play the Australian Open.

The fall-out from the decision has led to a diplomatic row, and Djokovic is awaiting a final verdict after launching an appeal. As it stands, he will not be taking part in the Australian Open for the first time in 18 years, and his immediate aim of becoming a double-digit winner at a single slam is in tatters.

Encountering Djokovic on Rod Laver Arena is a daunting proposition for any player. It is his domain, his patch and his court. Rarely does the nine-time champion suffer defeat Down Under, yet this year he’s been dethroned without striking a single ball.

His personal choice has ultimately led to his non-participation, and it is the second time in seven majors his actions have prevented him from competing for the silverware he craves.

At the US Open in 2020, he was defaulted for accidentally hitting a line-judge with the ball and evicted from a tournament he was the overwhelming favourite to win. A moment of recklessness cost him in New York, but a long-term decision is responsible for his latest anguish. 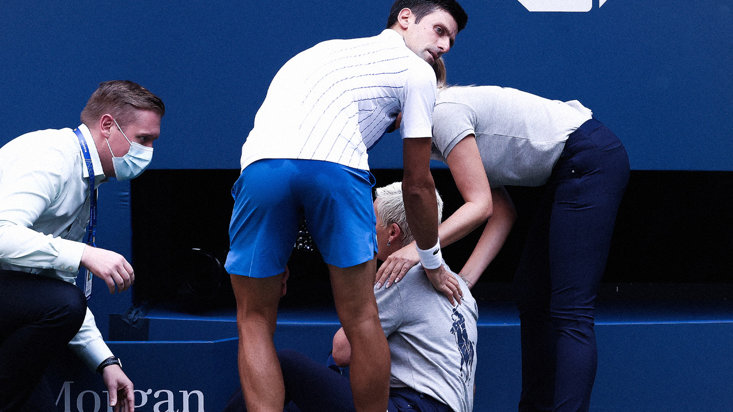 The 20-time major winner has been victorious in 27 of his last 28 slam matches, and his dominance shows no sign of abating. His non-involvement at the Australian Open is unlikely to halt his spiralling major-haul for long, but at 34, every opportunity has to be embraced and cherished.

Djokovic encounters derision for his unconventional views, and it is a factor as to why his on-court achievements are under-appreciated. Despite his desire to be universally popular, many of his iconic performances have been in hostile environments.

The world No.1 will be unperturbed by a prolonged backlash to recent events and will use this latest drama to fuel his bid for an unrivalled legacy. Difficulties are more likely to be encountered regarding his vaccination status - and the wide-ranging approach countries adopt in terms of COVID-19 restrictions.

Italy has introduced new government-imposed measures - and the ATP has informed members: 'unvaccinated players will be permitted to compete at events provided they present a negative COVID-19 test every 48 hours. They will not be allowed to use tournament facilities, locker rooms, gyms, on-site cafes, restaurants or hotels.'

Rome hosts the Italian Open in May, a significant Masters event leading into Roland Garros. The unvaccinated will, begrudgingly, be welcomed with strict conditions attached. Djokovic, and others, will encounter similar, perhaps even tighter restrictions as the season progresses, and the constant uncertainty could impact his ability to play a full calendar.

Athletes resent missing matches and events through injury, so it will be particularly galling for Djokovic to observe his beloved Australian Open from afar while fit and healthy. 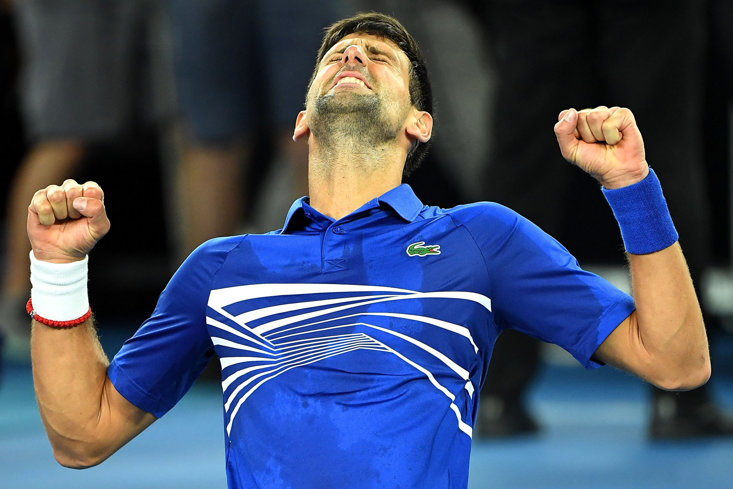 He has been handed a watching brief for a tournament that looked set to provide him with his crowning moment, a 21st slam success. He has had The Norman Brookes Trophy ripped from his grasp, and Daniil Medvedev can move within range of the world No.1 ranking by embarking on an unbeaten fortnight.

Djokovic has been blocked from defending his title and partaking in the sport he adores. Further upheaval and complications will impact his season unless his time in isolation results in an unlikely rethink.

The first major of the year promises to be compelling viewing, but it would be an even better spectacle if the finest player in the game had been in situ for a shot at a perfect ten.

x
Suggested Searches:
Manchester United
Liverpool
Manchester City
Marcus Rashford
Premier League
More
snooker
15-Year-Old Schoolboy Wildcard Stan Moody Is A Shoot Out Sensation
Schoolboy Stan Moody claimed a sensational debut big-tournament victory at the quickfire Shoot Out on [ ... ]
snooker
Peter Devlin Raps On Stage Alongside Jessie J In Snooker Shoot...
Peter Devlin hopes he can perform on the Shootout stage as well as he did with singer Jessie J earlier [ ... ]
snooker
18.5m Viewers And Upside-Down Glasses: Dennis Taylor Ruled Snooker...
Snooker may never quite see another high-watermark like the 1985 World Championship final with its 18.5million [ ... ]
snooker
Neil Robertson: Other Tournaments Need To Match Incredible Ally...
Neil Robertson has urged the Crucible crowd to up their game as a spectacular Masters spectacle this [ ... ]
snooker
Neil Robertson Builds On Australian Ashes Success With Masters...
Neil Robertson piled Masters success on Ashes misery as the latest Australian to demolish England’s [ ... ]
snooker
Barry Hawkins Digs Deep To Book Masters Final Showdown With...
Barry Hawkins took his place in the Masters final after coming through yet another Alexandra Palace [ ... ]
snooker
Paul Hunter: The Great Man The Masters Trophy Is Appropriately...
Among many poignant moments at the 2022 Masters at Alexandra Palace, one perhaps stood out above all [ ... ]
snooker
Robertson Wins Masters Thriller To Reach Final But Celebration...
Neil Robertson produced an astonishing comeback to reach the Masters final by beating Mark Williams [ ... ]
snooker
World Number One Mark Selby To Seek Help Over Mental Health...
World No1 Mark Selby has revealed he will be seeking help over the current state of his mental health. [ ... ]
snooker
Neil Robertson Vows To Jump In Icy Alexandra Palace Lake If...
Neil Robertson has vowed to jump into the icy Alexandra Palace boating lake if he wins a second Masters [ ... ]
snooker
Judd Trump Insists Masters Atmosphere Is More Like Boxing Than...
Judd Trump laid out rival Kyren Wilson with a series of hammer blows on Friday – and then insisted [ ... ]
snooker
Masters 2022: Williams Edges Out Old Rival Higgins In An Alexandra...
Both Mark Williams and John Higgins testified to one of the most extraordinary atmospheres ever seen [ ... ]
snooker
Neil Robertson: Ashes and Michael Jordan Inspired Me Against...
Australia’s Neil Robertson took inspiration from both the Ashes and sporting legend Michael Jordan [ ... ]
snooker
Kyren Wilson Relishing Masters Clash With Rival Judd Trump
Kyren Wilson became the second man to scrape into the Masters quarter-finals on Wednesday – as [ ... ]
snooker
Judd Trump Edges Into Quarter-Finals But Mark Allen Still Smiling...
Mark Allen was still smiling on Wednesday night despite an agonising Masters final-frame defeat to Judd [ ... ]
snooker
Masters 2022: Snooker’s Class Of 1992 Still Thrilling Crowds...
All three of snooker’s famous Class of 1992 of Ronnie O’Sullivan, John Higgins and Mark [ ... ]
snooker
Ronnie O'Sullivan Wows Rolling Stones Pal Ronnie Wood With Masters...
Ronnie O’Sullivan wowed Rolling Stone Ronnie Wood as the Rocket got his bid for an eighth Masters [ ... ]
snooker
Shaun Murphy: Masters Defeat Is Just More Pain On Top Of Back...
It wasn’t just the pain of a disappointing Masters first-round defeat to Barry Hawkins that was [ ... ]
snooker
Ranking The Five Greatest Masters Finals - Featuring Williams,...
There were some near misses, and I have chosen to leave out the superb comeback victory for a 39-year-old [ ... ]
snooker
Masters 2022: History-Making Higgins Books His Place In The...
John Higgins made history when he walked out against reigning UK champion Zhao Xintong at the Masters [ ... ]
snooker
Fired-Up Mark Williams Defeats Wayward Defending Masters Champion...
Defending Masters champion Yan Bingtao had a bad start to his Sunday, getting lost while being [ ... ]
snooker
Steve Davis Looks Back At His Stunning Masters Win Over O’Sullivan...
Steve Davis still believes his last major tournament win owed plenty to a streaker breaking Ronnie O’Sullivan’s [ ... ]
snooker
Changing Of The Guard: China’s Hopes For Snooker Domination
When Ding Junhui burst onto the snooker scene in spectacular fashion in 2005, many expected the Chinese [ ... ]
snooker
Masters Preview: Can Chinese Whizkid Yan Bingtao Defend His...
Snooker’s big guns will be out in force for this year’s Masters (9-16 January) and for defending [ ... ]
snooker
Ken Doherty - 25 years On From His Greatest Triumph At The Crucible
Ken Doherty will head back to the Crucible Theatre later this year to celebrate the 25th anniversary [ ... ]
snooker
Snooker’s Original ‘Grinder’ Cliff Thorburn Ready To Call It...
Snooker’s original ‘Grinder’ Cliff Thorburn admits he is finally ready to pack away [ ... ]
snooker
Graeme Dott Believes Stephen Hendry Will Be ''Much Better''...
Former world champion Graeme Dott has backed Scottish snooker legend Stephen Hendry to do some serious [ ... ]
snooker
World Number One Mark Selby Won’t Rest While There’s Still History...
Mark Selby insists there is no chance he will ever rest on his snooker laurels while there are titles [ ... ]
snooker
750-1 Upsets, Breakout Stars & World Class Wins: Snooker's Best...
Snooker like all sports to a greater or lesser degree was hit by the Covid pandemic in 2021 – [ ... ]
snooker
Ronnie O’Sullivan – What Changing Of The Guard?
If there is indeed a changing of the guard taking place in snooker, then someone clearly forgot to tell [ ... ]