Football
News
The Cost Of Supporting Manchester City This Season
Jack Porter
12:16, 16 May 2019

With Pep Guardiola’s men having had another stunning season, The Sportsman has calculated how much it cost an individual Manchester City supporter to witness - in person - every one of their moments from the 2018/19 campaign.

If you’re a dyed-in-the-wool Blue who’s fortunate to both afford the price (and of course the time off work) to attend every single game across the multiple crusades, The Sportsman has worked out that it’s likely that you’ve had to fork out a staggering wedge of approximately £6044.

The accumulated total includes the price of an average Man City season ticket price for all the home Premier League games, plus the capped cost per league game to be an away supporter for the club (£30), and then every step of the way along the League Cup, FA Cup, and Champions League trail.

Appropriate travel costs exclude organised coach trips/travel packages. Therefore it’s trains for domestic journeys, flights abroad, in addition to appropriate confectionary cost for the speculated ordinary consumer; a couple of pints of beer and a pie as an average.

Of that £1989, £1195 was required solely for the 38-game Premier League season, an additional expenditure of £335 for the Champions League, £243 for their FA Cup run all the way to the final, and £187 for the League Cup, which they again eventually won against Chelsea, on penalties (around £85 to see the preceding 0-0 draw).

The cost of travel eclipses that necessary attendance payment; £1280 to travel to all 19 other teams in the Premier League, from as far up as Newcastle United, all the way down to Bournemouth (the costliest train ticket, at approximately £132 return from Manchester Piccadilly).

Following their record-breaking exploits across the 2017/18 season, which saw a monumental 100-point tally to claim their third Premier League title, City have been battling on four fronts throughout the season.

Having achieved Champions League football for the eighth successive year, City fans have been country-hopping in the premier European tournament that initially took them to France and Ukraine, and also to Germany, a country that they would also be required to do a second time with a knock-out stage round to Schalke04 after progressing through their group.

They were ultimately rewarded with a Quarter-Final bout a little bit closer to home, with a journey to the new Tottenham Hotspur Stadium, the Lilywhites going on to subject City to their second successive quarter-final exit in the competition, across the two legs.

The team and those City fans have travelled a total of 17,401 miles on their domestic trips for both league and cup competitions and ventures across Europe, the furthest single round trip being to the Ukraine to play Shakhtar Donetsk (4300 miles, at a cost of over £300 at the flights’ cheapest). In total, this works out to an expense of £2069 in train tickets, and £866 by air travel. In addition, hotel prices have been calculated to an approximate of £393 (single night stays) at Champions League destinations in peak time. 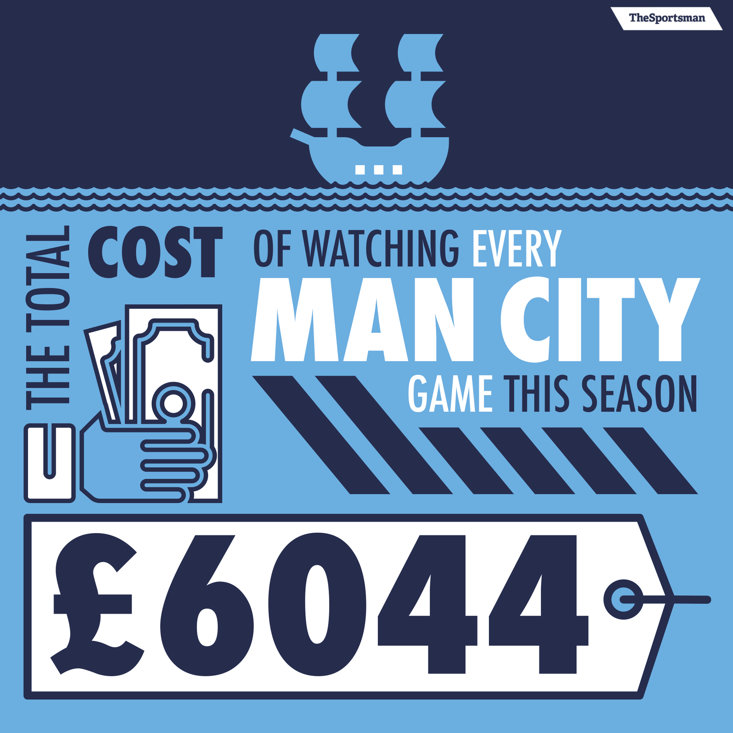 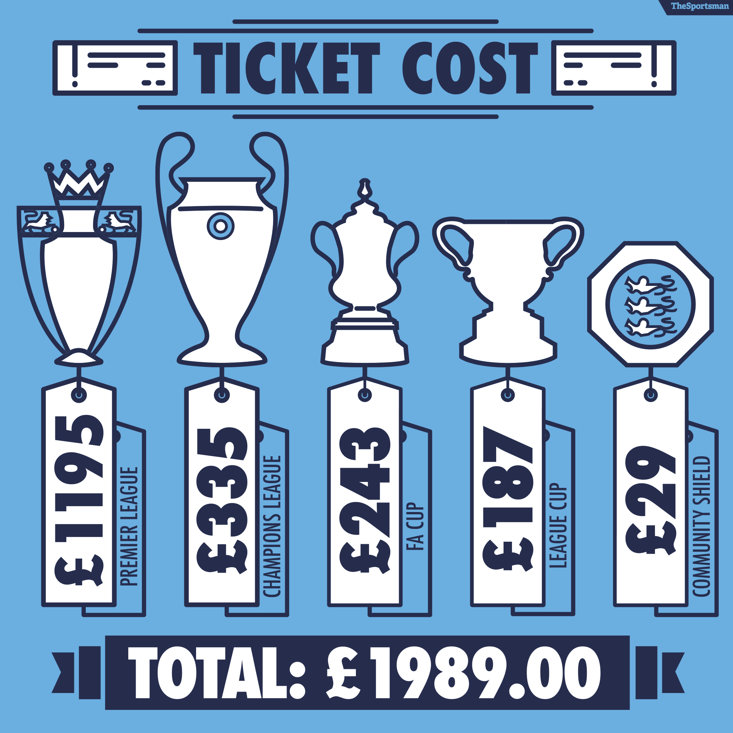 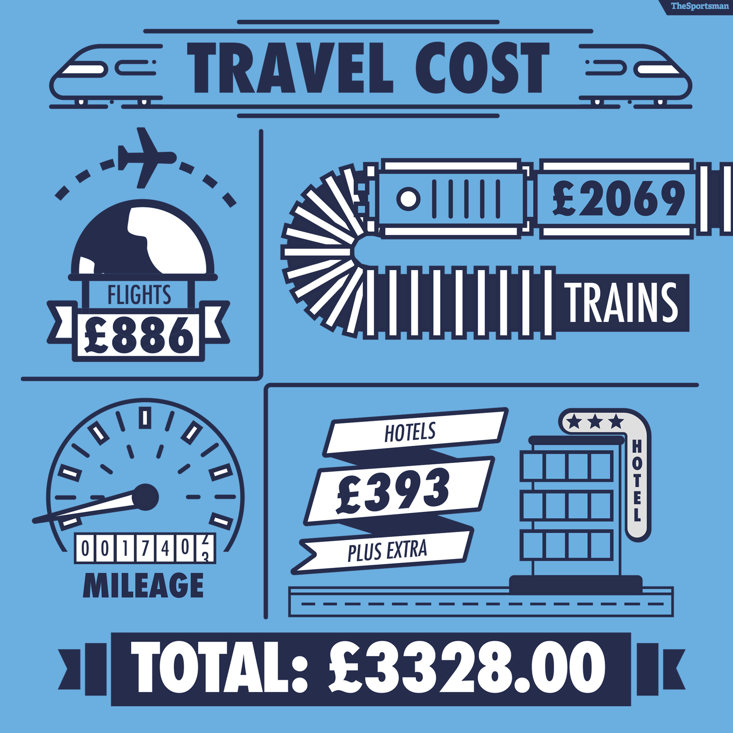 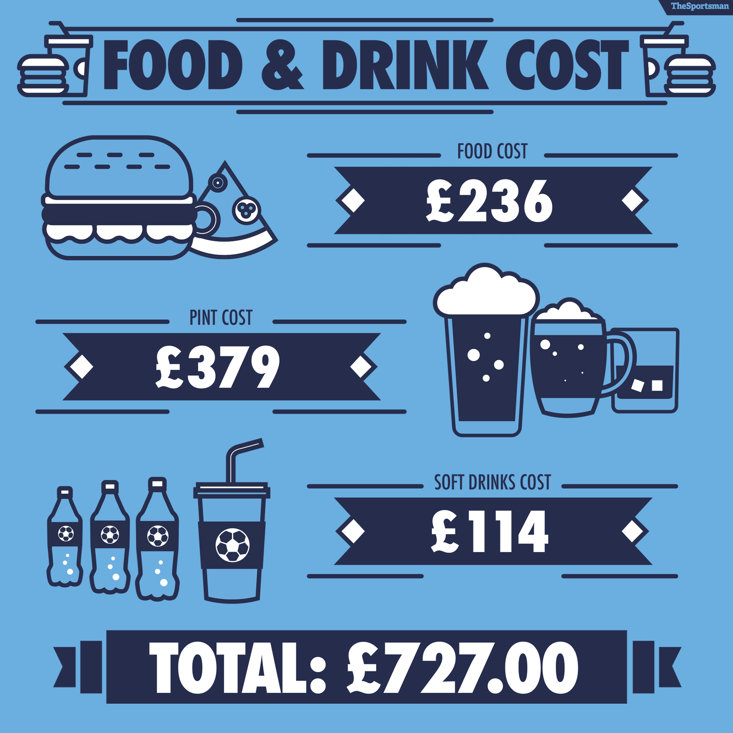 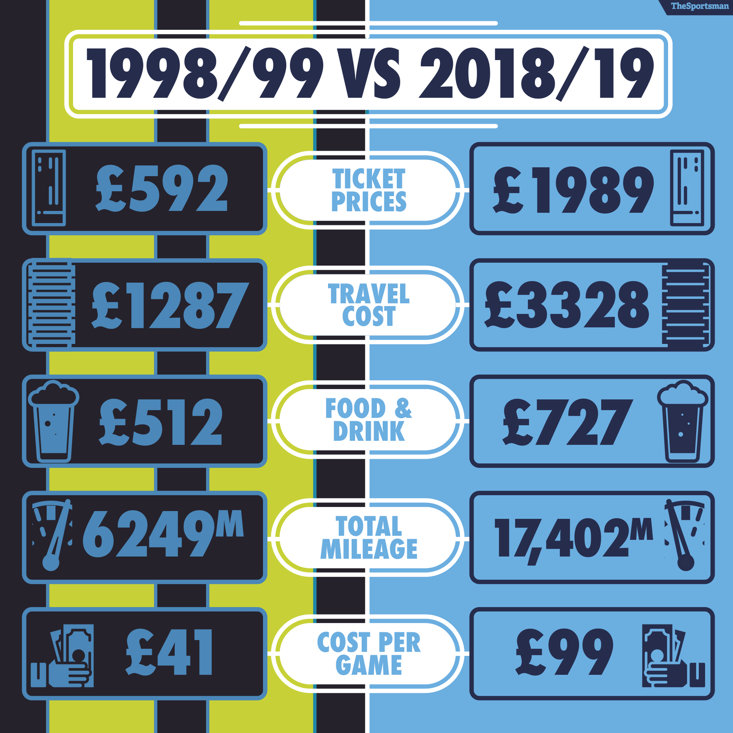 Premier League rivals Manchester United, Tottenham Hotspur, Liverpool, Arsenal, and Chelsea - monikered ‘The Big Six’ - have also all been competing in Europe for their own respective campaigns. Having both made the Final - to be held at the Olympic Stadium in Baku, Azerbaijan - Arsenal and Chelsea have each chalked up around 30,000 miles, owing to the rather more remote locations of the expansive Europa League tournament.

Manchester City are once again on the verge of carving out their own little slice of history, the culmination of a decade-long strategy that will return the domestic treble of the League Cup, Premier League and, with victory over Watford at Wembley, the FA Cup; the first time the feat has been accomplished in English football history.

While this special bunch of players will be in line for a share of a £15million windfall for the triple achievement, there is a substantial accumulated amount that it has cost the weary Manchester City nomad to follow their team’s path on this particular journey.

City have experienced a total of 61 games over the season, following the FA Cup Final which is included in the five journeys to Wembley; the Community Shield curtain-raiser in which they beat Chelsea, a league fixture as it was being deployed as Spurs’ temporary home, the FA Cup Semi-Final, and the League Cup Final.

There have been notable instances of generosity from figures from the club itself in assisting the loyalty, to an extent. Supporters were refunded on travel for a rearranged fixture at the beginning of the season at Tottenham Hotspur to a Monday Night game, due to an NFL fixture clash. Raheem Sterling - the recently elected PFA Young Player of the Year - made headlines earlier on the season by paying for more than 500 students to attend the FA Cup Semi-Final at the national stadium, where his side achieved victory over Brighton & Hove Albion and reach their third final in the tournament in eight years.

At Man City’s home-ground of the Etihad Stadium, the bundle of two pints and a pie is charged at £8. Away from home, the additional confectionary cost is a bit pricier, tallying a median of £11.75 across the Premier League contenders.

The total £6044 works out around a fifth (17%) of the average national salary in the UK. In summary, devoted Citizens have been required to part with £99 for each cracking day out.

With Champions League football continually on the menu for the club, and amassing a league points tally of close to 200 - unprecedented in the Premier League era - across the past two seasons, you may find it hard to seek out a fan who will argue against it being money well spent.

Go back 20 years ago, Manchester City were finding themselves trying to escape from the Second Division (the equivalent of the current League One), and playing the likes of Northampton and Macclesfield Town. A total of £509 would have been spent following the Blues up and down the country, to York City - a 2-1 defeat at Bootham Crescent considered by many to be the worst day in the club’s history - to Gillingham, and to Lincoln, and racking up a retrospectively meagre 6249 miles visiting the rest of the 24 teams that made up the division.

The Champions League, of course, wasn’t even a pipe dream, unlike their cross-town rivals Manchester United who achieved the unmatched continental treble in the same season.

How things have changed.