For the first time since 2008/2009, four English teams have made the Quarter-Finals of the Champions League.

In tribute, we’ve compiled a combined XI of the four English sides that are vying for Champions League glory, judged by how they’ve performed so far this season in Europe.

This would be a tough ask if even two of the teams had managed to make the last eight, but somehow we’ve persevered, and here’s our selection below.

Honestly, is there any one else you would prefer in net going ahead?

Though it’s unfair to bring down the mood, going into the Quarter-Final, Jurgen Klopp will know it’s a massive blow to lose the Scotsman for the next game after Robertson picked up a silly booking at the Allianz, and will now be suspended.

Stunning work from arguably the best centre-back, with a massive captain’s header for the second goal in Munich to epitomise his importance to this Liverpool team.

If this was reality, a combination of Van Dijk and Laporte in the heart of defence would be mouthwatering, and it’s hard to think of a better defensive duo in world football, with a combined cost of £132 million. Worth every penny.

Bit devoid a really really strong options here, a tussle between Walker and Trent Alexander-Arnold, with the young Englishman certainly in contention. Neither has contributed an assist so far in Europe this season.

The German gets an inclusion by becoming the first player since Franck Ribery in 2012 to register three assists in a single knockout Champions League match. Furthermore, he’s got four goals in his last three games.

Tenacious, hard-working, and seemingly the future of this City squad after signing a brand new £150k a week contract until 2025. A brilliant player.

Liverpool’s highest away goal-scorer in European Cup/ Champions League history. Will be vital for the rest of the knockout stages, seeing as this is the period in which the Senegalese tends to score the most goals (69%). Playing him here on the right to accommodate Sane on the left.

Five goals this campaign, and an assist, with a 76% shots on target rate. Scored the only goal of the return leg at Westfalenstadion to condemn Borussia Dortmund to back-to-back defeats, and ease Spurs into the Quarters.

Same goal return as Kane this season, and simply one of the greatest forwards to grace English shores. Manchester City’s all time top goalscorer, with his tally bolstered by a stonking 35 strikes in the premier European competition, placing him joint-16th in the league. 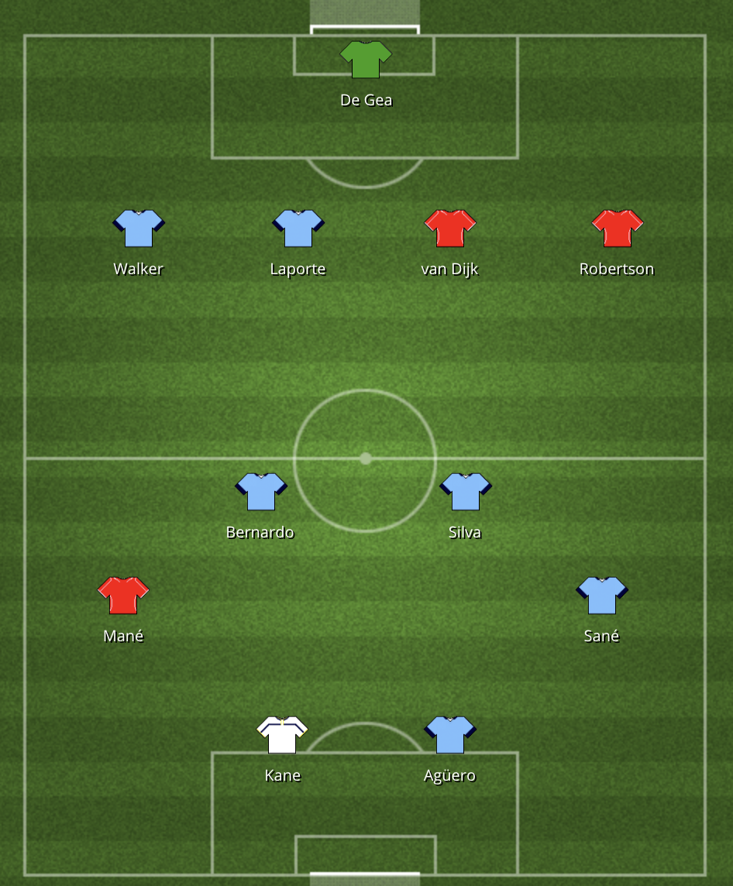