Denmark’s heroic fairytale of a Euro 2020 journey came to a heart-breaking end as a controversial penalty decision led England through to Sunday’s final.

Mikkel Damsgaard opened the scoring for the Danes but an own goal from Simon Kjær and an extra-time strike from Harry Kane, who scored the rebound from his spot-kick, brought an end to a great sporting story of a generation.

Denmark had been widely adopted as many nations’ second favourite team in the Euros following the traumatic events involving their star player, Christian Eriksen, suffered a cardiac arrest in their opening game of the tournament. With zero points heading into their final group game against Russia, they recorded a thumping 4-1 victory as the team finally got into their rhythm and laid their mark on the tournament. They followed it up with a 4-0 thrashing of Wales and a 2-1 victory over the Czech Republic. They have rallied behind each other and the cause of progressing for their missing talisman.

Against England they showed that they had fully-warranted their place in the last four, not only by being the first side in the tournament to penetrate the Three Lions’ defence but because they also gave them their toughest game at the Euros as well. They took them all the way in 120 minutes of football, and while they could only sit back and absorb the pressure in the end, they had stages in the game where they were the better team. 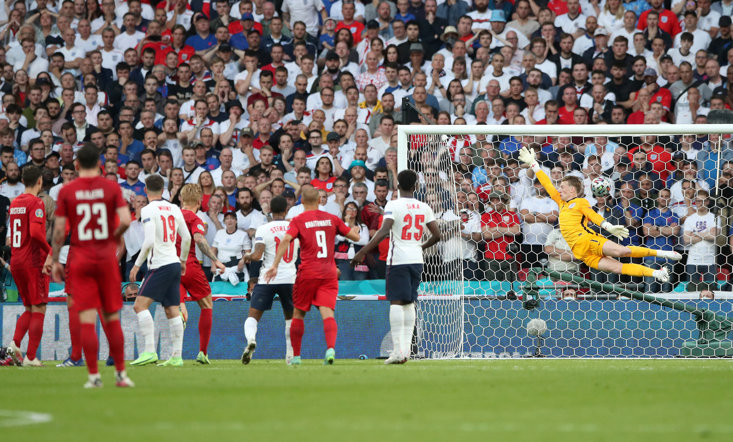 DAMSGAARD'S STUNNER WAS THE FIRST FREE-KICK GOAL OF THE EUROS

They produced some dominant play in spells in both halves, they were particularly impressive in the build-up to Damsgaard’s sublime free-kick which fired the Danes into dreamland. In the opening stages of the second half, they looked more fluid on the break but they just lacked that cutting edge in the final third.

They got a foothold in the game after a fraught first 10 minutes, and were able to capitalise on their momentum with a sensational free-kick from Damsgaard, who stunned the home crowd and sent the travelling away fans into pandemonium.

England did not let their heads drop, and Sterling forced Schmeichel into an astonishing save before captain Kjær could not help but turn the ball in the back of his own net to pull the Three Lions level. Remarkably, it was the 11th own goal of the tournament.

Schmeichel pulled off another world-class save early in the second-half to deny a powerful header from Harry Maguire and as the game went into extra-time, Kane forced a reactive stop from the giant goalkeeper, who was putting in a very strong performance to keep Denmark in the tie. The Danes faced a barrage of England chances as Schmeichel once again prevented them from going behind as he denied Jack Grealish after John Stones had a header cleared off the line.

Schmeichel was eventually beaten after England were awarded a very soft penalty, and while the Leicester City goalkeeper was able to deny Kane’s spot-kick, he could not prevent the rebound going in to fire the Three Lions to the Euro 2020 final.

They may have bowed of the tournament at the final hurdle, but with the way this team united when they were presented with the most harrowing of situations, showing fight and character in abundance on their way to the semi-finals, Denmark have come out as winners in their own right.