Gigi Buffon is back where he belongs. One of the greatest goalkeepers of all time has rejoined Juventus, a club where he has made more than 500 appearances over a period of 17 years. He returns to Turin as a club legend, a man who has won everything there is to win in Italian football, with only the elusive Champions League missing from his collection. He returns to the Old Lady in pursuit of that crowning glory and will hope that the master of European football, Cristiano Ronaldo can deliver once more on the big stage.

Buffon’s Juventus adventure has been well documented but someone who played a pivotal part in the deal to bring him to the club is often forgotten and overlooked. The Italian giants paid a world-record fee for a goalkeeper (€51m) at the time but also included a player in the deal, who at the time was worth €10m.

Jonathan Bachini was one of the promising youngsters of Italian football during the 1990s having broken through as a teenager at Udinese. Several loan deals gave him the experience across his homeland before he made the big move to Italian giants Juventus in 1999.

A two-footed promising midfielder, he had made one appearance for the national team by the time he moved to Turin, with then manager Dino Zoff impressed with his physicality, speed and work-rate. Juventus aimed to improve the winger who by then was approaching 25 years of age, and coming into what should have been his prime at one of the best clubs in the world.

However, he failed to fulfill his potential in the black and white stripes and was sent out on loan to Brescia, before being included in the deal between Juve and Parma. Buffon went to Turin and Bachini went the other way to I Crociati, a historically successful side during the 1990s.

Unfortunately for Bachini, things didn't turn out how he had hoped at his new club. He rejoined Brescia on loan just two months into the season and remained there for four years, after making his loan move permanent in 2003. He left Parma having made just one appearance for the club.

In 2004, things went downhill for the Italian. He tested positive for cocaine during his time at Brescia and was suspended for nine months. That ruled him out until the summer of 2005 when he was picked up by Siena who were prepared to give him another chance.

In January 2006, the once-promising Italian was once again tested positive for cocaine and the Italian Football Federation threw the book at him. He was banned for life. Speaking to Gazetta dello Sport in January he opened up about his situation:

“The message I can send to young people is to always be careful, to do nothing lightly, to reflect that a mistake is enough to compromise everything. It is not worth it.

“Forgiveness would be a precious message also for the guys. I didn't hurt anyone but myself: is it right that you pay forever? More than thirteen years have passed: if I had killed someone, maybe now I would be free. Instead I think I'm the only one or among the very few players disqualified for life.”

Juventus certainly got the better end of this deal, and Buffon will now return for his second spell at the club, but we shouldn’t forget the undisciplined enigma that was the makeweight to bring the Italian great to Turin in the first place. 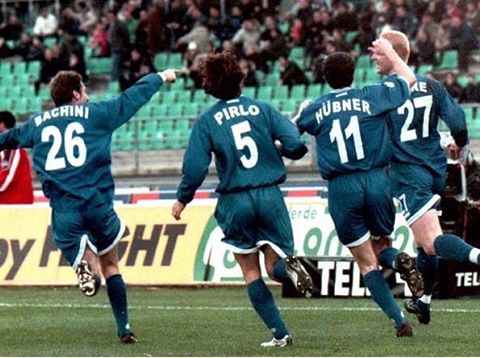