Following on from a narrow 2-1 win over Watford at Old Trafford, Manchester United suffered their third defeat in four games with yet another loss to their 2018/19 bogey team this week, Wolverhampton Wanderers, who are now unbeaten in five Premier League games .

Against Nuno Espirito Santo’s side this season, in all competitions, the best the Red Devils have been able to muster is a 1-1 draw at Old Trafford, also suffering the disappointment of an FA Cup exit at Molineux in March.

Impressively, with the latest result, Wolves have become the first promoted team in 16 seasons to avoid defeat to the 13-time Premier League champions upon first coming up from the English second-tier in their inaugural season.

The last time that Man Utd failed to win home or away against a promoted side in a single Premier League campaign was back in 2002/03, a good five years before the oil money came rolling into Eastlands, when they drew at home and lost away to Manchester City.

Back when they were playing at Maine Road, in November 2002, just before the big move to the Etihad, a goal from Nicolas Anelka and a brace courtesy of Shaun Goater (via mistakes from Fabien Barthez, Gary Neville, Rio Ferdinand, and Laurent Blanc) allowed the Cityzens to run out 3-1 winners in the 127th Manchester Derby.

The man who scored the consolation for the travelling team? None other than United’s new gaffer Ole Gunnar Solskjaer. In the return leg at the Theatre of Dreams, goals from Ruud van Nistelrooy and Goater (again) gave each side a share of the spoils.

Whilst City still can claim the better goal difference from that achievement, Wolves now have staked their credentials to remain a top-half team, and will no doubt be extremely satisfied in denying the Red Devils time and time again this season.

The result however has further repercussions for Manchester United, who have been under the stead of Solskjaer since mid-December after taking over from Jose Mourinho.

United have now played five of their six possible games against the promoted sides who came up from the Championship after the 17/18 season. Easy wins were forthcoming against the now-relegated Fulham both at Old Trafford and Craven Cottage, and Solskjaer famously marked his first game in charge by helping United to record the first time they’ve scored five goals since Sir Alex Ferguson’s last match as manager in May 2013, by seeing off his old side Cardiff City 5-1 in South Wales.

In total so far, they have then tallied 10 points from the three promoted teams. However, if Manchester United draw or lose to Cardiff City on the final game of the season, they will either equal or record their lowest tally of points against the promoted sides in the period since Manchester City withstood United both home and away in the 2002/03 season.

United have lost just ten times to promoted teams in this duration, but 60% of those occasions have come in the last five seasons, since Sir Alex Ferguson departed the club.

Four of the last five campaigns has seen losses at the home of the Championship-winning side, and with United only winning one in the last six; defeats under Louis van Gaal at Leicester City and Bournemouth, a defeat to Newcastle United last season, and now Wolves, with only Turf Moor the place where they’ve managed to take all three points after overcoming Burnley.

On only three occasions since that 2002/03 season have Manchester United manager the ‘clean sweep’ of six victories against those fresh foes, and twice when they’ve got onto win the title, back-to-back between 2007-2009.

Three times previous have United suffered two defeats to promoted sides. The lowest tally thus yet registered between 02/03 until now was the 2004/05 season, when United only won half of their games to the newly-promoted Norwich City, West Bromwich Albion, and Crystal Palace, failing to take full points off any of them and mustering an eventual tally of 11.

It wouldn’t be a strong start to mark Solskjaer’s hopefully long and fruitful managerial career with Manchester United if he has to suffer this dubious honour. 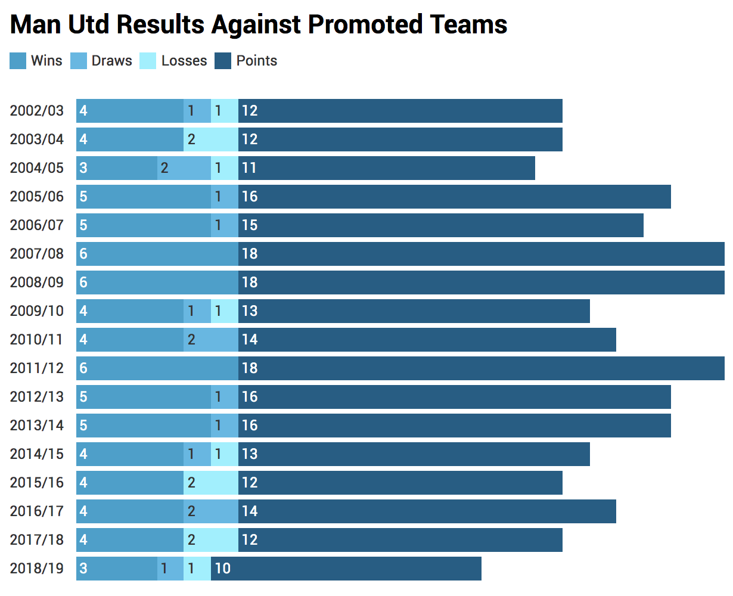 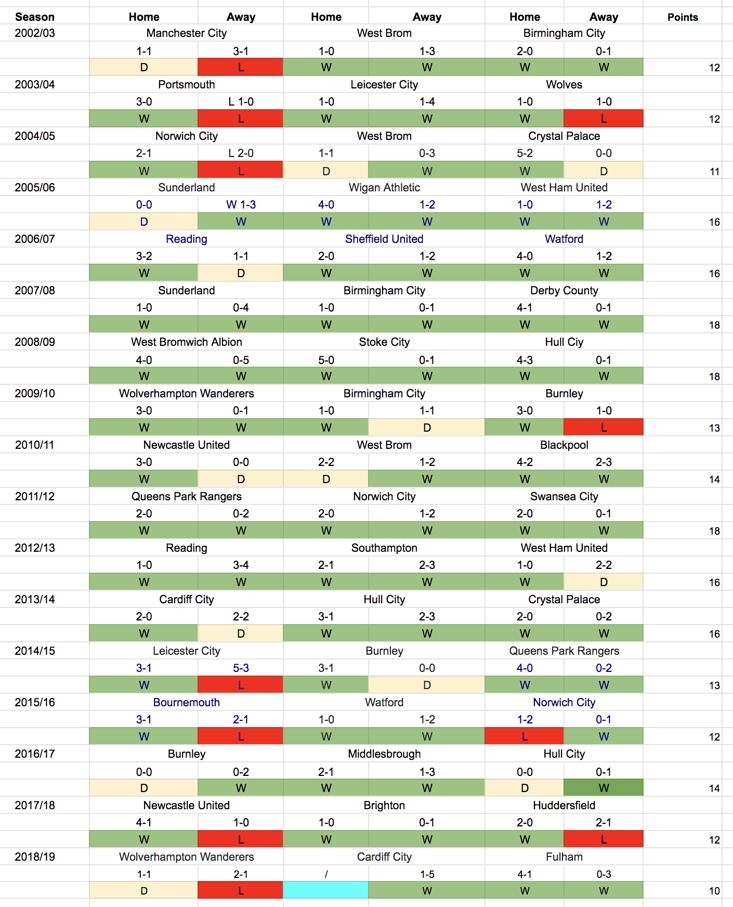