The British Grand Prix returns this weekend as Max Verstappen looks to extend his lead at the top of the Drivers’ Championship. Lewis Hamilton and George Russell’s homecoming will hopefully be slightly less bumpy on the smooth straights of Silverstone as Hamilton looks to add to his record eight wins around this track. That includes the dramatic win last time out and six of the last seven races here. To celebrate the return of this iconic race, we take a look at the five most dramatic Silverstone moments in Formula One, starting with a little bump last time out.

Verstappen vs Hamilton boils over - 2021

The heated title battle that would run to the final lap of the final Grand Prix of the season hit a volatile spike in England’s countryside. Having won the Sprint ahead of Hamilton, Verstappen started on pole and the two title protagonists went at it over the first few corners, with the home favourite all over the back of the race leader.

Heading into Copse Corner, Hamilton got alongside Verstappen but oversteered into the then Championship leader, causing him to lose a rear tyre and sending him careering into the barrier at 180mph. The race was red flagged and Hamilton was handed a ten-second penalty but still went on to win his 99th race and cut Verstappen’s 32 point lead to just seven points but the post-match was all about the rising tensions between Mercedes, Red Bull and their two main men.

Teammates Nigel Mansell and Nelson Piquet went at it back in 1987 at Silverstone and the man with the moustache put in an epic comeback display to secure an unlikely win. With 29 laps to go, he was forced to change his tyres and the gap to his teammate shot up to 28 seconds.

However, a mesmerising charge, which saw him reel in Piquet with multiple lap records and he approached the back of the Williams-Honda with two laps to go. In one of the most famous moves in F1 history, he faked to go one way along the Hangar Straight and then dived down the inside, somehow making his way past Piquet to take the race win. On the warm down lap, he stopped where he had overtaken the Brazilian and kissed the ground, such was the magnitude of this move.

Two great title rivals crashing at Silverstone? Verstappen and Hamilton were not the first. In 1995, Michael Schumacher and Damon Hill were locked in a titanic battle for the title and the British Grand Prix always adds extra pressure to championship contenders. This time, having also collided in Australia the previous year to hand Schumacher the title, it was Hill at fault in front of his home crowd.

He was piling the pressure onto the German race leader and looking for a way around the Benetton, but he thought there was a gap when there wasn’t. Heading round a left-hander, he poked his nose up the inside and found himself tangled with Schumacher, as both cars careered off into the gravel trap. Johnny Herbert took the race win and Schumacher would win the 1995 Championship, but Hill won his only Drivers’ Championship the following year.

Mansell again. This time, during his championship winning season at the age of 39, he sent the Silverstone crowd wild with a win that saw him become the most successful British driver of all time. A win in 1992 at Silverstone saw him win his 28th Grand Prix to break Jackie Stewart’s record, while he would win the championship in the fewest Grands Prix (11), in a 16-race season after winning nine races across the campaign. He had to wait 180 races before becoming a world champion, but it just made it all the more sweeter.

The crowd rushed onto the circuit to congratulate Mansell, who was waving a British flag in front of a delighted home crowd. Schumacher would break those records in 2002, and Lewis Hamilton would become the greatest British driver of all-time, but this was a seismic moment in the sport. To put Hamilton’s achievements in context, he has now won 103 Grands Prix. Out of this world. 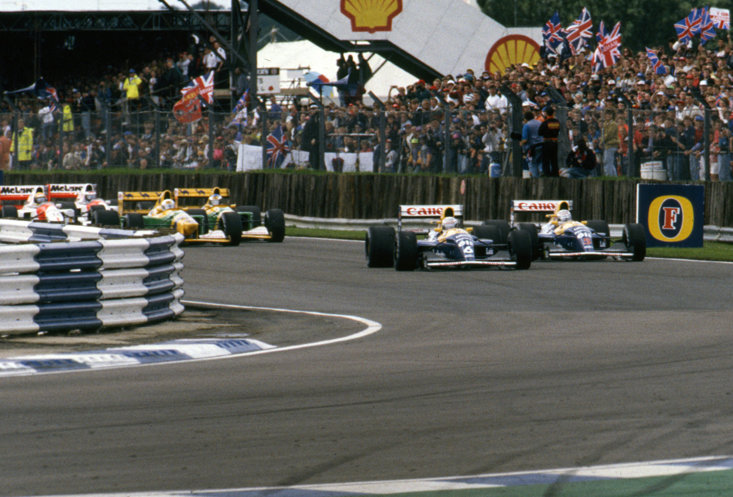 The British Grand Prix has been on the F1 calendar every year since 1950 and although Giuseppe Farina’s Alfa Romeo won the very first Grand Prix, the following year, something even more history-defining would happen. Ferrari, now the most successful engine manufacturer in the sport with 241 race wins to their name, won their very first F1 Grand Prix.

Jose Froilan Gonzalez would write his name in history for Ferrari as he reached the chequered flag first in Ferrari’s very first British Grand Prix appearance. They’ve won 16 British Grands Prix since then, with their last win coming in 2018 thanks to Sebastien Vettel. Can Charles Leclerc or Carlos Sainz make it 17 this weekend?