Serena Williams has delivered the strongest hint yet that she is ready to call time on a spectacular career that has established the 40-year-old as arguably the greatest tennis player of all time and a true sporting icon.

Williams, the winner of a record 23 grand slam singles titles in the Open era not to mention another 14 in women’s doubles and a couple more in mixed plus four Olympic golds, claimed a first tour victory for 430 days in beating Spain’s Nuria Parrizas-Diaz 6-3, 6-4 at the National Bank Open in Toronto.

That was just a second match of the season for Williams, who lost in the first round at Wimbledon to Harmony Tan after a year out with injury – and whatever happens now in Canada it is looking increasingly likely that her appearance at the US Open later in August could be her last tournament.

It would certainly be a fitting farewell venue – at her home major event in the USA, and also the place where the glory years all started 23 years ago, beating Martina Hingis in the final to claim the first of those slam singles triumphs.

At first Eastbourne, where Williams played doubles with fellow trailblazer Ons Jabeur, and then again at Wimbledon before and after her loss to Tan, she was bombarded with questions about her future plans and whether she would ever be back as a player at SW19.

These were all expertly avoided and deflected with no firm intentions expressed. But those in the rooms were left with the impression that the end might be coming sooner rather than later.

But after the first-round victory against Parrizas-Diaz, Williams hinting at “freedom” from being on tour, said: “I guess there is only one light at the end of the tunnel. I don’t know, I’m getting closer to the light, so… lately that’s been it for me. I can’t wait to get to that light.

“I love to play though … but, you know, I can’t do this forever. Sometimes you just want to do your best to enjoy the moments and do the best you can.”

Six-time US Open winner Williams has entered this year’s New York tournament on an injury-protected ranking. She last played the event in 2020, where she reached the semi-finals before losing to eventual runner-up Victoria Azarenka – and was forced to miss last year's tournament due to the hamstring injury sustained at Wimbledon.

Due to her long spell of inactivity, Williams is currently unranked on the WTA computer, but is entered in New York with a special ranking of No16. At Wimbledon this year she did not make use of that option but was instead granted a wildcard.

Wimbledon
@Wimbledon
Some play the game. Others change it.
We hope the next few weeks bring you joy, @serenawilliams 💜💚 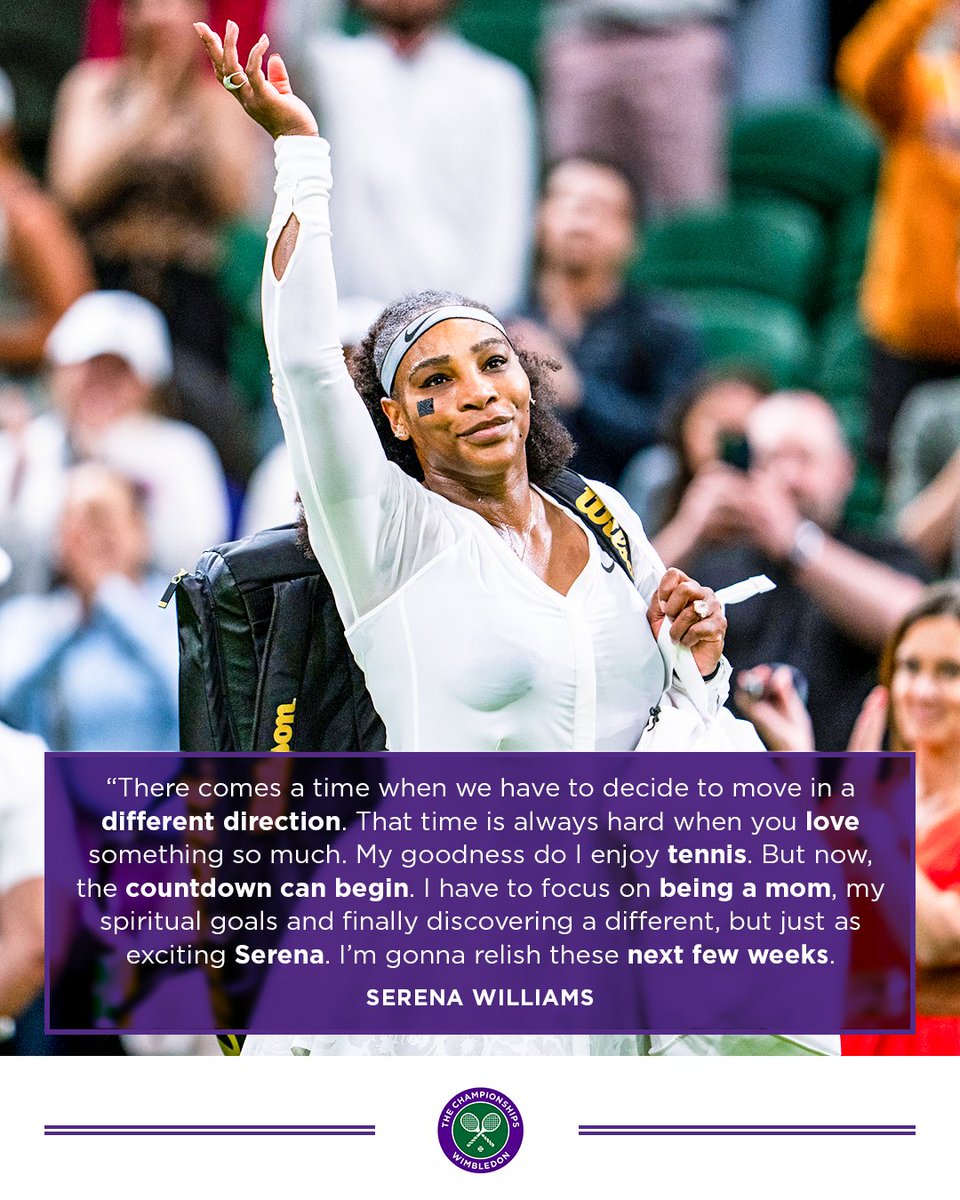 Her time in the game has brought Williams huge fame, fortune and influence and she will be remembered as much for her stellar achievements as a trailblazer and inspirational role model for women in sport and black athletes.

And if there is one regret – barring something quite extraordinary in New York – it will be that she didn’t quite equal Margaret Court’s all-time record of 24 grand slam singles titles. Much like Tiger Woods in golf and his quest to match Jack Nicklaus’s haul of 18 majors, it looked like a mere formality a few years ago. But circumstances may see that Court record stand, perhaps forever.

When she first won the US Open in 1999, Williams became the first African-American to lift a slam trophy since Althea Gibson in 1958, and that also saw her pip sister Venus to winning a slam by just a year. The incredible story of two siblings that conquered the tennis world was celebrated in the 2021 film ‘King Richard’ that charted their ascension under the initial steering of their father from the public courts of Compton in Los Angeles to international superstar-dom.

Whenever it finally comes – and depending on what happens in Canada in the next few days and the draw in New York, she may even have gained her last victory - the moment of leaving the sport will be a moment to celebrate an incredible career for Williams.

And she will then head off into already well established second careers in investment and fashion.