Due to the varied nature of the centre-back role, from brawny blockades all the way up to elegant ball-players, we have decided to divide our central defensive picks stylistically rather than positionally. Rather than focusing on left or right, we have chosen to distinguish between physically dominant centre backs and ball-playing defenders. You can read about who we chose as our enforcer tomorrow, but for now we are focusing on defensive passers. When you think of Premier League defenders who created play as well as breaking it up, you think of Rio Ferdinand.

Progressing through the youth ranks at West Ham United, Ferdinand established himself as a first-team regular at Upton Park while still a teenager. The defender moved to Leeds United in 2000 for £18 million, a British transfer record and a world record for a defender at the time. In his first season at Elland Road, he played a vital role in his club reaching the Champions League semi-final, scoring a headed goal in the quarter-final. Financial troubles led to Leeds selling Rio to rivals Manchester United after the following season, with Sir Alex Ferguson signing off on a British record £30 million fee. Still only 23 years old, this was the second time a club had paid a British record fee for Ferdinand. 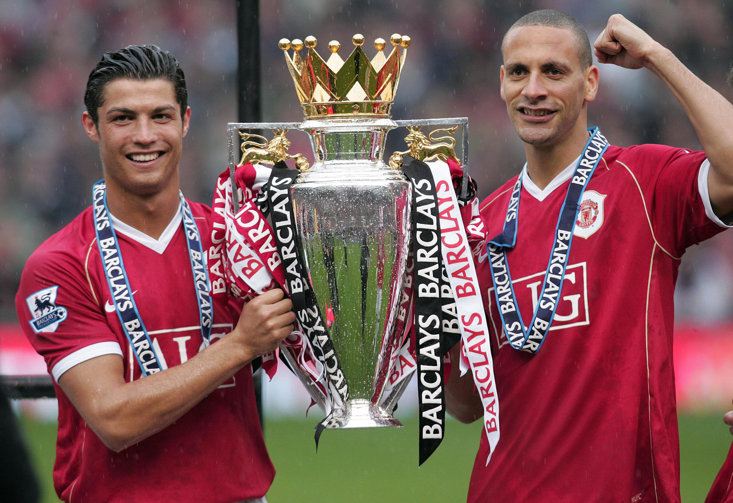 The career Ferdinand enjoyed at Manchester United is the stuff of legend. Six Premier League titles, three Champions League finals including one trophy, and countless other honours do not begin to tell the story of the player’s Old Trafford impact. That is something we will endeavour to do in a feature that will accompany this piece on the site. But to summarise, Rio formed one of Premier League history’s greatest defensive partnerships with Nemanja Vidic. His skill, calm and leadership over twelve seasons with United put him at the forefront of our Greatest XI debate. But Rio Ferdinand was far from the only name considered.

Some current players were brought up in The Sportsman office, with Virgil van Dijk coming close to inclusion. Liverpool’s struggles last season with the Netherlands international sidelined are the perfect demonstration of his importance to Jurgen Klopp’s side.

Another recent title-winner, John Stones, falls short on this occasion. His improvement at City and superb passing warrant a mention, but the former Everton man will need to prove he can do it consistently season after season. A trickier exclusion was Sol Campbell. It is often loss in the furore of his crossing of the North London divide, but Campbell was utterly superb for both Tottenham Hotspur and Arsenal. With the latter he won two Premier League titles and scored in a Champions League final. Campbell was also a vital part in the Portsmouth team that finished 8th and won an FA Cup.

A player looked on more favourably by Spurs fans is Ledley King. A ridiculously talented ball-playing defender, you feel injuries were the main barrier to matching the achievements of Ferdinand and Campbell. Tipped as the next Bobby Moore during his academy days, his fine reading of the game and confidence in possession were something to witness. Had he played more regularly, he could have been a real competitor for our final XI.

Rio Ferdinand is a clear winner here though, at least as far as The Sportsman is concerned. Do you agree with our choice? Tell us who we missed in the comments.