Sports
News
This year's instalment got underway this week and to celebrate, here are our pick of five iconic WSM moments
Kieran Spratt
10:00, 14 Nov 2020

Since its debut in 1977, The World’s Strongest Man has become a beloved spectacle to hundreds of millions of people, from all walks of life, across the globe. Strongman sport is embedded in our DNA - humans have always delighted in feats of absolute strength, from our cave-dwelling ancestor’s tugs-of-war with woolly mammoths (not historically accurate) to Viking log lifting, we have always wanted to move the seemingly unmoveable.

That’s the genius of the annual competition. An incredibly simple concept that sees almost mythical men, capable of pulling double decker buses or deadlifting nearly half a ton of iron, go toe-to-toe with one another for the title of World’s Strongest Man… imagine being able to say that!

There have been terrible tantrums, strongmen superstars and freakish feats over the last 43 years, here are five of our favourite moments…

1977 was a big year for Lou Ferrigno, who announced himself to the world, first alongside Arnold Schwarzenegger in body-building documentary Pumping Iron and then in the first ever WSM event.

Ferrigno proved that those muscles he’d built and utilised in his assault on Arnie’s Mr Olympia title weren’t just for show, and he finished a respectable fourth in a field of eight competitors, even coming out on top in the bar-bending event. He was cast as The Incredible Hulk shortly after, a superstar was born and the rest is history.

Kazmaier And The World’s Strongest Legs, 1981

The WSM has had a bounty of colourful characters spread across its history, none more so than Bill ‘Kaz’ Kazmeier who had arrived at the 1981 instalment with an axe to grind against fellow American Dave Waddington, a man who many believed was the proud owner of the strongest legs in the world.

Kazmaier, chip firmly placed on shoulder, was never going to let this stand. In the squat event, cool as you like, the man from Wisconsin managed a mind-blowing 435kg (959lbs), before calmly stepping off the podium, pointing to his thighs and boldly declaring, “These are the strongest legs, right here!”

Rivalries are woven into the very fabric of WSM (Eddie Hall and Hafþór Björnsson’s is so intense, they’re boxing each other next year) and the one shared by two icons of the sport, Geoff Capes and Jón Páll Sigmarsson, was one of its very best. It began in 1984 when Sigmarsson beat Capes, then the reigning champion, in the arm wrestling event before lifting both of his arms in the air, triumphantly roaring, “The king has lost his crown!” to the onlookers.

Many thought that would be the end of Capes but revenge would be his and a year later he would win a second WSM title after beating Sigmarsson in the final event, this time the loading race, and responded in kind by telling the world, “The king is not dead.” Iconic.

When it comes to a sport that’s all about shifting inhuman amounts of weight around, it should come as no surprise that injuries are commonplace, and unfortunately for some strongmen these injuries can be absolute horrors - take Nathan Jones’ arm break heartache in 1995.

When Jones sat down to take on Magnus Samuelsson in the arm-wrestling event, you’d have been forgiven for thinking that there was some foul play going on, given how much Jones dwarfed the Swede. But, before becoming a strongman, and as Jones would learn to his peril, Samuelsson was the European arm-wrestling champion. No matter how much straining and shouting, Jones couldn’t budge his opponent’s arm an inch, eventually snapping his own arm in the effort. Ouch!

Thor And Shaw Kick Off A Rivalry For The Ages, 2014 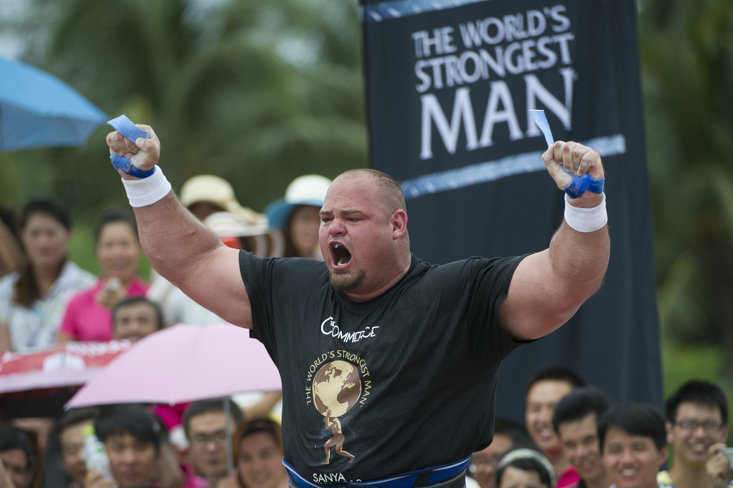 There’s no question that Hafþór Björnsson, partly down to his role as ‘The Mountain’ in the HBO smash-hit Game of Thrones, is a full-blown superstar these days, more so perhaps than any strongman in history. The Icelandic giant, who won the tournament in 2018, has certainly rubbed a few of his rivals up the wrong way in recent years, Hall obviously, but it’s with four-time WSM winner Brian Shaw that Björnsson has shared his most heated rivalry with.

The most famous clash of these titans came in 2014, when Shaw set an unbelievable world record time of 16.95 seconds, and the normally humble man from Colorado declared the event as “easy.” Björnsson, not one to be outdone, made sure the lofty new record didn’t stand for long. Next up, Bjornsson shocked the world when he posted an even better time of 16.35 seconds.