Cricket
News
In a huge year for cricket, it feels more important than ever that the women’s game is given a good platform
Simon Lillicrap
14:00, 23 Feb 2021

The long-awaited The Hundred competition is set to revolutionise cricket and will finally kick off this summer with a women’s game, as the Oval Invincibles take on the Manchester Originals live on the BBC. It is set to elevate the women’s game and the players alongside their male counterparts and provide a brilliant chance for young boys and girls to see female cricketers on terrestrial television.

In a year where six million people tuned in to watch England’s men take on India in the first Test, where the Men’s T20 Cricket World Cup will take place and where England will contest the Ashes at the end of the year, it feels more important than ever than women’s cricket is given a platform. With all of these brilliant events on TV, many children could have grown up associating the sport of cricket as male only, and this is where The Hundred hopes to level the playing field.

Test Match Special
@bbctms
The first ever match of The Hundred will be a women's fixture between Oval Invincibles and Manchester Originals.
That game will be live on the BBC.
Live:
#bbccricket 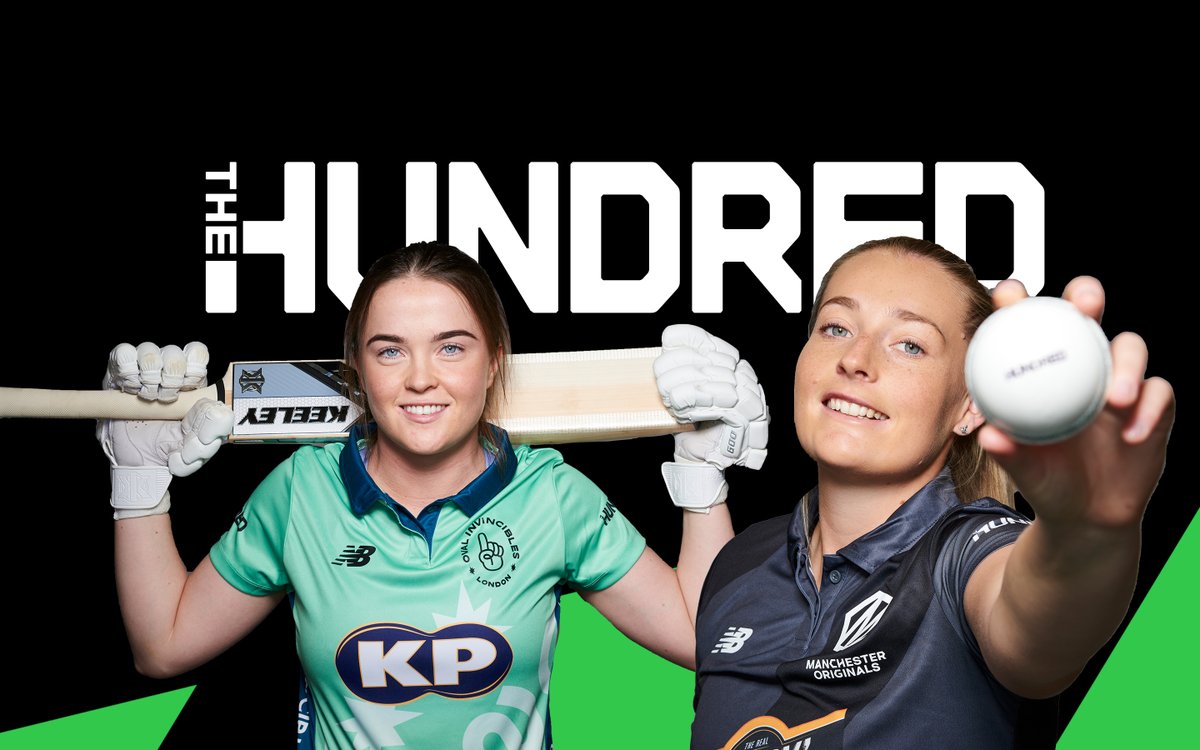 Stars such as Sophie Ecclestone, Heather Knight and Natalie Sciver will be able to showcase their talents in this new 100-ball format of cricket. With the exciting tournament now on the horizon having been delayed by twelve months due to the pandemic, things are looking up for the sport. Eoin Morgan and the chiefs at the ECB have already stated they are hoping that The Hundred will attract a whole new audience to the sport and if targeted right, there is no reason why kids can’t be a major part of that audience.

With simplified rules and scoring, teams ‘local’ to where they are from, and both a men’s and women’s team to support, this could strike a note with the younger audiences. Test cricket is simply too long for them to keep focused and the IPL has no local connection for this younger generation, this is where The Hundred can bridge the gap between cricket on the screens, and going to the game in person.

With outdoor sporting events to reopen this summer, all going well, the opening game on the 21st June could see a large crowd in attendance, which would get this new tournament off to a flyer. For young girls and boys, they could go and be inspired by some of the finest female cricketers on the planet and get themselves hooked on the sport.

With any luck, The Hundred will provide us with some thrilling, all-action cricket this summer. However, the real benefits and impact of the tournament may not be truly seen until the 2030s. We could have a whole team of men and women who cite The Hundred as the reason they got into cricket in the first place. Here’s hoping.

x
Suggested Searches:
Manchester United
Liverpool
Manchester City
Marcus Rashford
Premier League
More
cricket
England's All Too Predictable Batting Collapse Costs Them Test...
Another inevitable England batting collapse. On a strangely sunny Monday morning in early September, [ ... ]
cricket
Consistency Now Key As England Look To Repeat Headingley Heroics
“Just when I thought I was out, they pull me back in…” There was a moment there where [ ... ]
cricket
England's New Look Line-Up Already On The Back Foot As India...
In the week that saw Lord Ian Botham appointed trade envoy to Australia, England’s current crop [ ... ]
cricket
Without Everyone Playing Their Part, England's Cricketing Struggles...
Former England Test cricket bowler Ryan Sidebottom believes England can enjoy success again if the whole [ ... ]
cricket
England's Batting Line-Up Is Shoddy, But The Lack Of Depth Is...
An Englishman with a bat in front of three sticks of wood has now become as nervy of a spectacle as [ ... ]
cricket
England's Final Day Defeat To India Was Inevitable, And Root...
A disaster. A shambles. An embarrassment. Several words have been used to describe England’s fifth [ ... ]
cricket
Rain And Root Deny India, But England Can't Keep Relying On...
In the end, the rain finished off the job Joe Root had started. The First Test between England and India [ ... ]
cricket
The Greatest Test Match: England's 2005 Edgbaston Ashes Win...
It felt like the peak of Test cricket at the time. Arguably, it remains the greatest ever game in the [ ... ]
cricket
Time For Joe Root's England To Find Some Consistency - Sidebottom
Former England Test bowler Ryan Sidebottom insists that Joe Root’s side must turn in a stirring [ ... ]
cricket
Ben Stokes' Break From Cricket Highlights The Strides Made On...
It is a truly wonderful thing that Ben Stokes will not be in England’s Test squad to face India [ ... ]
cricket
Ryan Sidebottom: England's T20 Hopes Have Received A Huge Boost...
We’ve seen the likes of Jonny Bairstow, Ben Duckett and James Vince flashing the bat to great [ ... ]
cricket
Ryan Sidebottom: The Hundred Is ''Off To A Great Start'' After...
Ryan Sidebottom believes cricket's divisive new tournament 'The Hundred' proved [ ... ]
cricket
Ryan Sidebottom: Why The Hundred Is A Game Changer For Women's...
For women in particular, The Hundred is huge. Ahead of the first ball being bowled it has had its doubters [ ... ]
cricket
England Can Dream Of Another World Cup Win, Two Years On From...
“By the barest of all margins.” The inimitable Ian Smith couldn’t have summed it up [ ... ]
cricket
The Newcomers Looking To Help Fire England To An ODI Win Against...
An inexperienced England are facing a huge test as they have been forced to name a brand new 18-man [ ... ]
cricket
Perennial Finalists New Zealand Finally Come Good To Win World...
New Zealand finally got the job done. In 2015 they were the entertainers of the tournament at the Cricket [ ... ]
cricket
Sophia Dunkley Is England's Newest Cricketing Icon That Can...
Sophia Dunkley is a history maker. She became the first black woman to play Test cricket for England’s [ ... ]
cricket
ECB Right To Suspend Ollie Robinson As Cricket Looks To Learn...
Culture Secretary Oliver Dowden joined a number of outspoken critics of the ECB’s suspension of [ ... ]
cricket
New Zealand Bring Desire, England Are Just Dire As First Test...
When New Zealand could have batted for a draw, they went hell for leather on the final day at Lord’s. [ ... ]
cricket
''I Can Still Improve'' Jimmy Anderson Part Of Resurgent Older...
Whisky. Fine wine. Jimmy Anderson. Just three things that get better with age. England’s highest [ ... ]
cricket
World's Best Cricketer Ben Stokes Has Become England's Imperfect...
If there is one thing the British public love more than an underdog story, it is a tale of redemption. [ ... ]
cricket
England Just Fall Short Against India Despite Sam Curran Heroics...
England came up short against India, losing by just seven runs in an absolutely thrilling ODI decider [ ... ]
cricket
England’s Aggressive Batting Pays Off As Bairstow And Stokes...
When England’s top three bat like this, there is simply no side in the world that can stop them. [ ... ]
cricket
Three Years On, Steve Smith Deserves Big Praise For His Response...
On this day three years ago the entire sporting world collapsed on Steve Smith’s shoulders. In [ ... ]
cricket
Root's Calm Head Missed As England Collapse To 66-Run ODI Loss...
India have defeated England by 66 runs in the first one-day international in a game that will once again [ ... ]
cricket
India T20 Win Over England Could Be Perfect Precursor To 2021...
England have lost the T20 series in India 3-2 having been comprehensively beaten in the final match. [ ... ]
cricket
Blistering Buttler Leads England To Bounce-Back T20 Win Over...
England showed their resilient side on Tuesday as they bounced back from Sunday’s defeat in the [ ... ]
cricket
Kohli Takes Centre Stage As England Come Up Short Against India...
England came up short in the second T20I match v India, losing by seven wickets as Virat Kohli proved [ ... ]
cricket
Archer And Roy Star As England Sweep India Aside In Opening...
England began Twenty20 World Cup year in emphatic fashion as they hammered India by eight wickets in [ ... ]
cricket
Weather No Excuse, England Must Learn From Woeful Batting Performance...
How quickly things can change. England’s 227 run win in the First Test v India feels like a lifetime [ ... ]