Manchester City are the latest club to get the mash-up treatment as their kit deal with Nike comes to an end.

Nike have produced similar shirts in the past for Barcelona, Inter Milan and Arsenal - incorporating many shirts into one eye-catching design.

Next season, City will be wearing Puma gear as part of a huge new contract which will also see the German supplier provide kit for the other clubs owned by CFG including Melbourne City and Girona.

The Nike Swoosh has been something of a lucky mascot for the blues, coinciding with the Pep Guardiola’s arrival and subsequent success.

This mash-up kit includes nine in all. Some fan favourites - such as this season’s striped dark blue away shirt - and some lesser celebrated kits such as last season’s Double Decker purple and orange kit. There’s also a space for a shirt that wasn’t even a playing shirt - the special edition training top produced to mark the club’s 100 point season.

While some fans would appear to be enjoying this “remix” of some old shirts, others see it as Nike’s final chance to squeeze some more revenue from the final days of its City contract. I mean, six years? Is this really a milestone anniversary worthy of such fanfare?

The City shirt will be worn as a pre-match warmup top when they face Fulham this weekend. In all, 6000 of the tops will be sold - all individually numbered. While there may be some eye-rolling at City's shirt, other mash-ups of the past have considerably more gravitas.

The recent Inter Milan design by Nike at least marked a tangible anniversary - 20 years of partnership. Plus, it was actually worn in a competitive game and not some vanity project. Only 1,908 shirts were released - commemorating Inter’s founding year - 1908,

The Inter shirt featured 10 different designs and because it featured just two colours - blue and black - it looked perfectly acceptable when worn out on the pitch.

Danny Brown
@dannybrownpt
Popped into @NikeUK phenomenon house on the way home from work, liking the mash up @Arsenal shirt on view http://t.co/lTPWRjuPol 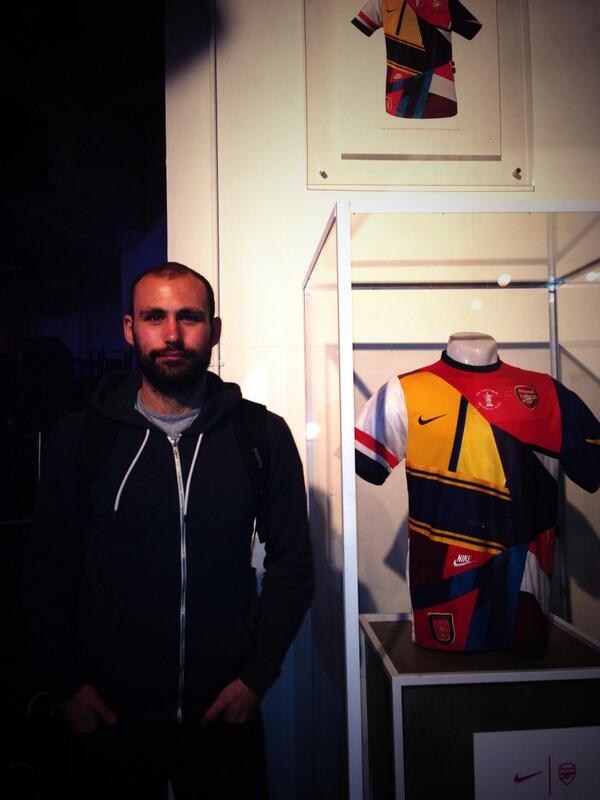 Barcelona’s own mash-up design wasn’t used in a game either - probably because of the mix of main shirt sponsors. Inter’s long-standing deal with Pirelli is one of the most famous and enduring in football so creating a hybrid kit was relatively simple.

The Barca shirt was released last November to mark 20 years of Nike’s involvement with the Catalonian club. Using the front, back and sleeves, Nike were able to include an element of every home shirt from the last 20 years in the design. Again, this worked well because Barcelona have never had a bad kit though next season's chequerboard design might challenge that.

Arsenal were the first club to get the mixed-up treatment, with the shirt produced to celebrate the end of Nike’s 20-year association with the club. Like City’s newly released effort, this shirt included home and away designs and because it was the first of its kind was rated highly by Gunners fans and collectors alike.

Puma replaced Nike as the Arsenal apparel supplier but next season the three bars of adidas will once again adorn the Gunners kits, evoking memories of some classic designs of the late 1980s/early 1990s.

The phenomenon of the mash-up shirt is not unique to Nike. Ahead of last year’s World Cup, adidas had a go and mixing some home and away shirts of their national teams including Argentina and Germany though the end results really didn't get the juices flowing.

Maybe the most innovative mash-up shirt was that produced by Hummel for Denmark last year. Christened the ‘Frankenstein’ kit, no shirt was like any other making them highly prized by collectors. The shirts were made from those once owned by supporters. Denmark wore the shirts against Chile in March and they were late auctioned for charity.

This trend is not unique to teams either. Players have started commissioning their own hybrid shirts featuring the different jerseys of clubs they represented. In the past 12 months we've seen Ruud van Nistelrooy and Jari Litmanen wearing composite designs of all the clubs they played for during their career.

With the thirst for retro shirt designs showing no sign of slowing down, there will be more tweaks and variations on this theme. Maybe there's a market for a sofa made up from different "swatches" of old shirts or even curtains? Actually, I'd better get that patented.

Classic Football Shirts
@classicshirts
Closer Look: The Inter Milan mash-up shirt by Nike celebrates 20 years of @Inter and @nikefootball
Only 1,908 of this Vaporknit version have been made available to celebrate the year the club was founded, 1908.
This shirt will be worn in the Milan Derby this weekend.
#Inter 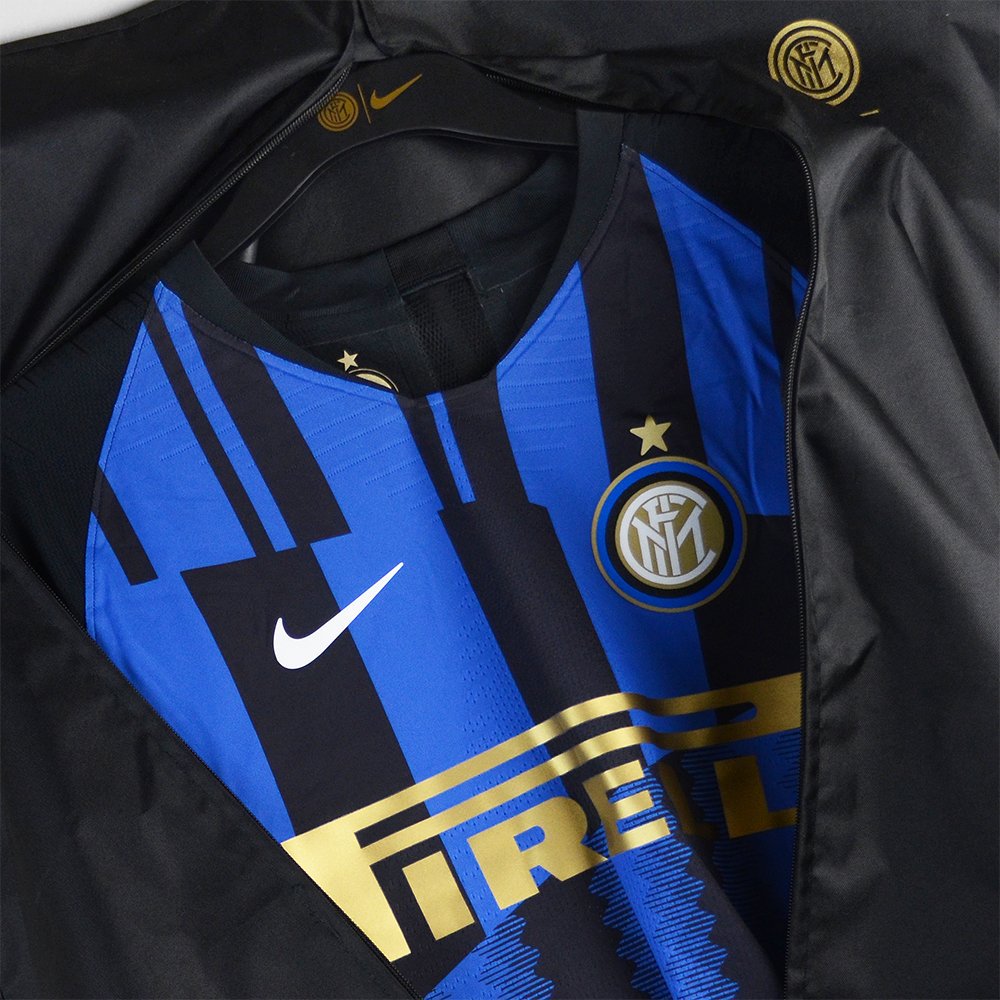 22
109
More
football
Get Ready For A Nostalgia-Fest With Italia '90 Podcast Vincerà!
Hosted by Mark Godfrey and running from June 8th to July 8th, Vincerà! is a 24-part podcast series [ ... ]
football
Harry's Heroes, Vinnie Jones And Revenge At The Battle Of San...
When Vinnie Jones started crunching San Marino players left, right and centre, it was clear the friendly [ ... ]
football
Prodigal Talent Of The German Game Is Turning RB Leipzig Into...
This article first appeared in The Sportsman on 07/12/19 What were you doing at the age of 28? If it [ ... ]
football
''I Was Really Wasted'': When Jurgen Klopp Woke Up Hungover...
This article first appeared in The Sportsman on 05/09/19 Anyone watching the Amazon Prime documentary [ ... ]
football
Book Review - Yer Joking Aren't Ya?: The Story Of Middlesbrough's...
In 1997, Middlesbrough Football Club reached the finals of both the League and FA Cup, had the might [ ... ]
football
Carragher's Brilliant Podcast Shows The Greatest Games Are The...
What’s the greatest football game you’ve ever seen?  Jamie Carragher doesn’t [ ... ]
football
Red Bull And The Football Training Centre Of The Future... Today!
It is now 33 years since Red Bull sold its first ever energy drink. Pre-April Fool’s Day 1987 [ ... ]
football
On This Day Messi's Barcelona Tally Hits 500 In El Clásico Triumph
If you’re going to hit a milestone, and one that no one in your club’s illustrious history [ ... ]
football
The Secret Behind The Success Of Lineker, Shearer And Wright's...
The unavoidable hiatus to the broadcast of the BBC’s flagship football programme will not deny [ ... ]
football
Neymar Jr... Junior! Santos Like The Look Of Ronaldo-Imitating...
On March 7 2009, a slightly-built 17-year-old from Mogi das Cruzes, São Paulo, walked out onto [ ... ]
football
Business As Usual: A Beginners Guide To The Belarus Premier...
If you’re going out of your mind without your football fix, well we’re sorry you just haven’t [ ... ]
football
Why June 30 Could Be D-Day For The Fate Of Premier League Season
England captain Harry Kane has added his voice to the growing calls for the Premier League season to [ ... ]
football
You Heard It Here First - Brescia's Sandro Tonali Is Italy's...
Since winning the World Cup in 2006, it has been turbulent time on the international stage for Italy. [ ... ]
football
A Reunion With Ancelotti Could Resurrect Rodriguez's Stuttering...
No club chews up and spits out world class players quite like Real Madrid. Yet, their sense of entitlement, [ ... ]
football
'Quickly Kevin' Is The 90s Football Nostalgia Podcast To Beat...
While the majority of sports podcasts scramble to fill the minutes within the disruption of the [ ... ]
football
Where Did It All Go Wrong For Phil Neville And The Lionesses?
Winning, Phil Neville recently said at the SheBelieves Cup, is what would bring England’s women [ ... ]
football
''Drop A Few Hand Grenades'' Keegan's Advice To Scholesy The...
A packed out Wembley roared like one of those indomitable Three Lions to greet England’s new messiah. [ ... ]
football
Rise Of The Couch Coach: Coronavirus Causes 119% Surge In Football...
Thousands of us are flocking to virtual reality and gaming to help fill the void of no live football, [ ... ]
football
Review: Diego Maradona - Drop Yourself Into The Great's Chaotic...
When Diego Armando Maradona arrived at Napoli in 1984 for a world-record fee, the entire city ground [ ... ]
football
Arsenal's Tough Choice - Is Donyell Malen The Ying To Aubameyang?
Arsenal’s inability to manage the contractual situations of their biggest stars has plagued them [ ... ]
football
Robbie Fowler Is Making His Mark As A Manager With Brisbane...
The curtains came down on one of the last bastions of football standing in 2020 this week. Before the [ ... ]
football
Long Live The King: Eric Will Always Be Manchester United's...
“If ever there was one player, anywhere in the world, that was made for Manchester United, it [ ... ]
football
I Was There - The Day Football Came Home To Wembley
The closest I ever got to attending the original Wembley Stadium was on its final day in operation in [ ... ]
football
'Sunderland Til I Die' Heads To The Boardroom In Netflix's Second...
The docks have been left deserted. The wealth has dried up. Wearside has become an impoverished place [ ... ]
football
How Chief Creator Silva Became New Face Of Premier League
Football has been cast into uncertainty by the coronavirus pandemic. As it stands, nobody is sure if [ ... ]
football
Lookback:Chelsea 6-0 Arsenal When Arsene's 1000th Game Went...
It was supposed to be an occasion to celebrate for Arsene Wenger, but his 1000th game in charge of Arsenal [ ... ]
football
Ronaldo, Kane, Hazard - The Winners And Losers Of Euro 2020...
So as of this week Euro 2020 became Euro 2021. Another casualty of the global Coronavirus epidemic. [ ... ]
football
Time To Act And Move The Premier League Transfer Window
When my husband had an ear infection, I used my medical knowledge to help him. I said the best thing [ ... ]
football
Southgate Shows Strong Leadership With Rallying Cry To Fans
England head coach Gareth Southgate has sent a rousing message to national team fans as football continues [ ... ]
football
Lookback:Spurs And Chelsea's Eight Goal Thriller
In the three full seasons of Jose Mourinho’s first spell as the club’s manager, Chelsea [ ... ]
This website uses cookies
Cookies help us and our partners provide statistics. By browsing this website, you consent to the use of cookies in accordance with our Privacy Policy and Cookies Policy.
Accept & Close