Football
News
The Italian Job: Chelsea’s Love Affair With Managers From The Boot
Jack Kitson
13:15, 30 May 2019

Over the past 21 years Chelsea have employed six Italian managers, from Gianluca Vialli in the late 1990s to the current incumbent Maurizio Sarri.

It’s been a rollercoaster ride and one that has added numerous trophies into the club’s trophy cabinet, with Claudio Ranieri the only one of his countrymen who failed to win silverware, perhaps surprising considering he’s the club’s longest-serving manager in the Premier League era (single spells only).

Vialli got the ball running in the late 1990s when, at the age of just 33, he became the Premier League’s first Italian manager which he juggled with playing duties. Within a few months he’d scooped the League Cup and UEFA Cup Winners' Cup, followed up with a UEFA Super Cup, the club’s highest finish since 1970 (3rd), and later the FA Cup, and Community Shield.

Vialli was succeeded by fellow Italian Ranieri who failed to replicate his predecessor’s success. ‘The Tinkerman’, as he became known for the constant rotation of his squad, managed one short of 200 games spanning nearly four years, and despite an FA Cup final appearance, a 2nd place finish in the league, and a Champions League semi-final, he ultimately finished his tenure empty-handed.

Jose Mourinho, aided by the funds of new owner Roman Abramovich, proceed to transform Chelsea into a domestic juggernaut. Avram Grant, Luiz Felipe Scolari, and Guus Hiddink were next in the dugout, before the London side went Italiano again in the summer of 2009, as they captured the prized signature of Carlo Ancelotti who became Chelsea’s fourth manager in 21 months.

Ancelotti enjoyed a spectacular debut campaign during which he became the first Italian to win the English league title, which he coupled with the FA Cup, and also the Community Shield. The Blues ended the following season trophyless and in the flick of a switch he was savagely sacked. 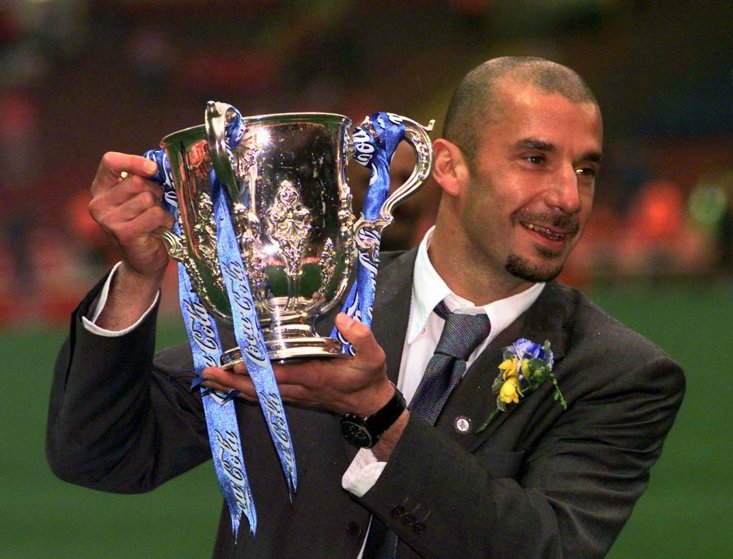 Ancelotti’s young successor, Andre Villas-Boas (33), was axed after nine months but his assistant, Roberto Di Matteo, then stepped up to the plate to lead the club to a sensational Champions League and FA Cup double. He was awarded the full-time job in the summer but despite his incredible achievements it never seemed like the right long-term appointment, and his contract was terminated a few months later.

Rafa Benitez came in for the rest of the 2012/13 season, Jose Mourinho returned, as did Guus Hiddink, then in July 2016 Antonio Conte was named as the club’s fifth manager from The Boot.

Like Ancelotti, Conte lifted the Premier League in his first season thanks in part to a transformational switch to a 3-5-2 formation. A tumultuous second season did end in success, this time in the form of the FA Cup, with Conte eventually leaving Stamford Bridge during the summer. The fallout over his £9m payoff continues to ramble on to this day, although he’s now set to return to the dugout with Inter Milan.

Maurizio Sarri was installed as the sixth Italian manager to take charge of Chelsea, and fifth under Abramovich, when he replaced Conte in mid-July following a three-year spell at Napoli.

It’s fair to say that he’s since endured a topsy-turvy 11 months, but while the implementation of Sarri-ball failed to flourish he can look back on a successful season during which he won his first ever trophy - Europa League - led Chelsea to 3rd spot, and a League Cup final. The 60-year-old former banker also set a new managerial record for the longest undefeated streak - 12 games - at the start of a Premier League tenure.

It will now be interesting to see if Sarri stays - "In my opinion, I deserve to stay at Chelsea but my opinion is not enough," he said after winning the Europa League - or if he’s instead lured back to his homeland with Juventus, whose now former head coach Max Allegri could, in turn, continue Chelsea’s trend of employing Italian managers.