As the dust settled on Joe Joyce’s spectacular 11th round knockout victory over Joseph Parker, two things became clear. Firstly, ‘Juggernaut’ is genuinely a world class heavyweight. Secondly, his opponent is one of the toughest men walking the planet today. This was a hotly-contested and well-spirited bit of friendly fire. The pair never resorted to shock tactics and circus tricks to sell it in the build-up, but the bout justified every bit of its pay-per-view price tag.

A neat left hook from Joyce opened proceedings and, in a sign of things to come, Parker was not deterred. The New Zealander pumped out a triple jab to try and negate Joyce’s obvious size advantage. The Olympic silver medalist raised the pace against the ropes but Parker nicked the round on activity alone.

‘Juggernaut’ cut the ring off brilliantly, starting in the second. The jab was a constant irritant for Parker and a couple of body shots let the former world champion know what he was in for. This intelligent pressure from Joyce continued in the third. A clubbing right hook and a follow-up left hurt Parker, who threw a looping right back before eating a massive hook. Parker looked genuinely hurt, but found something deep within himself that allowed him to fight back. The ex-WBO king actually finished the strongest, landing shots to Joyce’s midriff before switching gears to land an uppercut.

Parker ruled the roost in the fourth with his educated right hand. First, he clubbed with it to beat Joyce back. Then he threw it as a short, sharp shock. Finally he launched it into Joyce’s bemused face like a guided missile, buzzing the Brit. This was Parker’s best round of the night.

Joyce understandably started the following round with caution. The action lit up in the final 90 seconds of the round, with Joyce’s body attack giving way to Parker’s hook and uppercut. Joyce started the sixth stanza in fine fettle, doing everything off the jab. It was a well-schooled three minutes in which he hurt Parker and shoulder-rolled elegantly out of the way of the dangerous right hand.

A big right hand from the South Auckland slugger took us into the second half of the fight. But Joyce roared back, as he seemingly always does, and pinned Parker on the ropes. A left hook stung his foe, a right hand cut him. Joyce tried to empty the tank on Parker but the bell saved the Kiwi superstar. 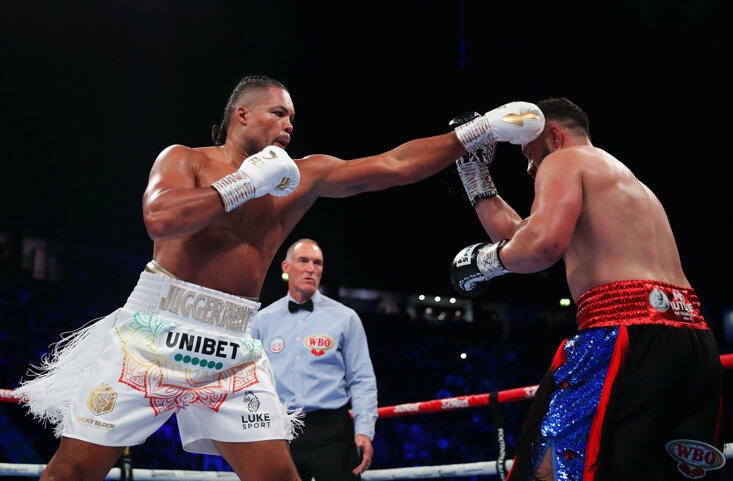 The eighth kicked off with hard straight shots from both hands by the ‘Juggernaut’. A Parker left kept him in it before he ceded control at the behest of a Joyce uppercut. Once again the former world boss showed heart to fight back and once again he had to feel a sickening body attack in return.

Joyce was feeling it now, starting the ninth with a left hook-right uppercut combination. Joyce took a right for his troubles but his iron chin held out. A short right hook from Joyce punctuated the round. He was given a receipt for that punch by Parker at the start of the 10th as the fight went to close quarters. Both men were warned for use of the head as this became a phone-box battle.

The end came in the 11th round, as Joyce picked an absolute belter of a left hook to send Parker sprawling. It was clear from the moment he hit the ground he was not getting up, but the formality of the count was observed anyway. It reached ten. Parker was stopped for the first time in his illustrious career. Joe Joyce had arrived.

The victory sees Joyce walk out with the WBO interim championship. Ostensibly the belt should put him in line for a shot at unified champion Oleksandr Usyk. The wheel of boxing fortune does not always spin that way. But if Tyson Fury, in attendance supporting Parker, and Anthony Joshua do meet this year then Usyk may take the challenge. It would certainly be a fascinating fight. Joyce has a combination of power, boxing acumen and toughness that would be a match for any heavyweight walking the Earth.