The first golf major of the year is less than two weeks away as The Masters takes centre stage at Augusta from Thursday 11 April and Patrick Reed will bid to become the first defending champion to win back-to-back titles in Georgia since a certain Tiger Woods in 2002.

Woods features prominently in our Top-10 Power Rankings for The Masters this year. What do you make of our picks?

Rory McIlroy (1)
There are signs that Rory McIlroy is ready for a big year as his victory at The Players Championship - the unofficial 'fifth major' - was his first victory since last season's Arnold Palmer Invitational and it was a huge statement of intent from a player who has arguably fallen behind some of the big guns in the sport of late.

McIlroy has recorded five successive top-ten finishes at Augusta and he is the No.1 pick for our Power Rankings. Can this be the year he completes the career 'Grand Slam' of major tournament wins by landing that elusive first green jacket?
Best Masters Result: 4th in 2015.

Dustin Johnson (2)
In at number two is Dustin Johnson, who has finished in the top-ten at Augusta on three occasions. Having won in Saudi Arabia and Mexico already in 2019, Johnson has now won 12 titles since the start of 2016, including his maiden major win at the US Open three years ago.

Could DJ be the first world number one ranked player to win The Masters since Tiger Woods in 2002?
Best Masters Result: T4 in 2016.

Tiger Woods (3)
Speaking of Tiger Woods, two years ago it would have been unthinkable to have the four-time Masters winner at number three in our Power Rankings but he has stormed back to become a force to be reckoned with once more. He ended his five-year wait for a PGA Tour title with victory at the Tour Championship towards the back end of last season and he has been solid this term.

Interestingly, Woods prospered in major tournaments last season, tying for 6th at The Open Championship and finishing runner-up at the US PGA. He is primed for a big showing at Augusta.
Best Masters Result: Four-time champion in 1997, 2001, 2002, 2005

Justin Rose (4)
Justin Rose has never missed a cut at Augusta, finishing in the top-25 in 11 of his 13 visits, although he has suffered his fair share of heartbreak in Georgia, not least when losing out to Sergio Garcia in a thrilling finale to the 2017 tournament.
Best Masters Result: Runner-up in 2017.

Rickie Fowler (5)
The best player never to win a major. The 30-year-old finished runner-up to Patrick Reed twelve months ago and surely a first major win will come soon for a player who has picked up eight top-five finishes in 36 appearances at major events.
Best Masters Result: Runner-up in 2018.

Jon Rahm (6)
In at No. 6 in our Power Rankings is the big-hitting Jon Rahm, who finished 4th in only his second appearance at Augusta last year. The Spaniard has been in good form since winning the Hero World Challenge at the end of 2018, collecting six top-tens in eight starts during 2019.
Best Masters Result: 4th in 2018.

Brooks Koepka (7)
Brooks Koepka boasts a relatively modest record at Augusta as his best finish was a tie for 11th in 2017, although you simply cannot rule out the three-time major winner. He secured back-to-back US Opens with victory in New York last year before following up to win the US PGA Championship. His best result of a tough 2019 has been a tie for 2nd at the Honda Classic.
Best Masters Result: T11 in 2017. 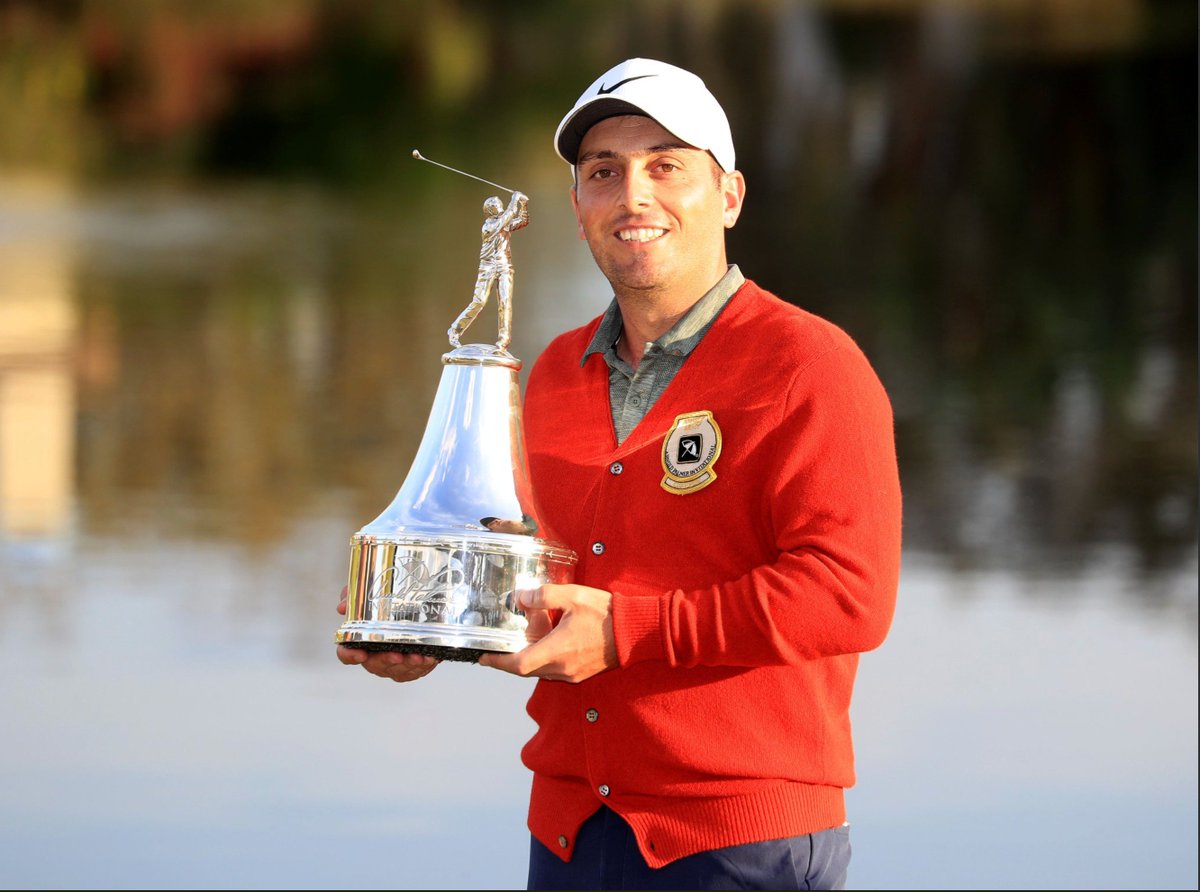 Francesco Molinari (8)
The popular European Ryder Cup hero is going well at the WGC Match Play at the time of writing and he sneaks in at No. 8 in our Power Rankings. The Italian has a new-found confidence since plying his trade on the PGA Tour and his victory at The Open Championship in 2018 is testament to that self-belief. Molinari should have the game to prosper at Augusta, where his best result is a tie for 19th in 2012.
Best Masters Result: T19 in 2012.

Jordan Spieth (9)
The 2015 Masters champion has endured a torrid year so far and he faces a battle to get his game in order before a return to an Augusta course that will provoke mixed emotions. His record at Augusta reads: 2nd-1st-2nd-11th-3rd but those numbers only tell part of the story. His horrendous collapse when snatching defeat from the jaws of victory in 2016 will have left its mark and one wonders whether he can overcome those mental scars when bidding to don the famous green jacket for a second time.
Best Masters Result: Champion in 2015

Justin Thomas (10)
Finally, Justin Thomas has been in good touch this year - three top-three finishes - and he is another player who should have a better record at Augusta than he does currently
Best Masters Result: T17 in 2018.

x
Suggested Searches:
Tyson Fury
Manchester United
Marcus Rashford
Lewis Hamilton
F1
Air Jordan
More
golf
Man, Megastar, And Mortal: The Book Examining The Second Life...
He’s the one name people who know nothing about golf, know about golf. But aside from the 15 Majors, [ ... ]
golf
Inside Michael Jordan’s Exclusive Golf Club, Where Drinks Are...
To the casual observer the Grove XXIII may seem like just another ordinary golf club in Hobe Sound, [ ... ]
golf
Caley Show That Buying Top Quality Golf Clubs Needn't Be Pricey...
A trip to the local golf course may seem like a distant dream for many of us, with the nation being [ ... ]
golf
The Best Gear And Gadgets To Get Your Golf Game To The Very...
“Confidence is the most important single factor in this game, and no matter how great your natural [ ... ]
golf
Flawless Colin Morikawa Is Golf’s Next Big Thing - But We Shouldn’t...
The world of golf witnessed one of the most remarkable feats in the sport’s history this weekend [ ... ]
golf
Squad Up! The Golf Gadgets Straight Out Of A Call Of Duty Game
Unless you live in Manchester where you’ve likely been raving hard in a field for the last three [ ... ]
golf
Knees And Tees: How The Ancient Game Of Golf Is Evolving
Long winding walks, falling leaves and a whole heap of fascinating wildlife. No, this isn’t the [ ... ]
golf
FedEx Cup 2019: Breaking Down Rory McIlroy’s $15 Million Win
On Sunday, Rory McIlroy won the Tour Championship for the second time to secure the FedEx Cup and take [ ... ]
golf
The Open 2019: Brooks Koepka Has A Not So Secret Weapon Up His...
1st, T6, T13, 1st, T39, 1st, T2, 1st, 2nd. Brooks Keopka’s last nine standings in major competition [ ... ]
golf
Duel In The Sun: When Tom Watson Famously Battled Past Jack...
The history of sport is jam-packed with epic duels. Only last weekend, Novak Djokovic ousted Roger Federer [ ... ]
golf
The Open Championship: Five Moments To Remember
Thousands of golf fans will be heading to Royal Portrush for this year’s Open Championship, the [ ... ]
golf
The Healing Power Of Sport: The Open Returns To Northern Ireland...
Peace is, as ever, precarious. Like an artisan mirror, so thoughtfully and delicately crafted, but with [ ... ]
golf
Carnoustie Capitulation: Jean Van de Velde's 1999 Open Meltdown
Occasionally in sport the name of the loser is easier to recall than that of the victor and that was [ ... ]
golf
Harry Vardon: Golf’s First International Superstar Who Remains...
When you think of famous multiple winners of The Open Championship the likes of Tom Watson, Jack Nicklaus, [ ... ]
golf
From Tragedy To Triumph: How Nate Lashley’s Rocket Classic Triumph...
Nate Lashley’s triumph at the Rocket Mortgage Classic may have slipped under the radar this weekend [ ... ]
golf
Gary Woodland: Four Things You Need To Know About The 2019 US...
Gary Woodland made a mockery of his long ante-post odds of 75/1 as he scooped his first major title [ ... ]
golf
From The Vault: When Tiger Woods Stunned The World At The 2000...
Athletes often talk about the importance of being “in the zone”. The perfect state of mind [ ... ]
golf
2019 US Open: Brooks Koepka Can Join This Elite Group Of Hat-Trick...
Since the start of 2017 Brooks Koepka’s cumulative score in major events is a simply staggering [ ... ]
golf
In Numbers: Double PGA Championship And US Open Champion Brooks...
Tiger Woods may have conjured up one of sport’s greatest comeback stories at the Masters in April [ ... ]
golf
2019 PGA Championship: How Tiger Woods Can Become The New World...
Tiger Woods has not played since his stunning comeback victory at the Masters two months ago, which [ ... ]
golf
Tiger Woods In Numbers: From Career Earnings To Tournament Triumphs
Tiger Woods is no stranger to making history. The man that transcends golf has broken a plethora of [ ... ]
golf
What Next For Tiger Woods? The Raft Of Records The 2019 Masters...
After all the drama, all the stories, all the injuries, setbacks, and moments of self-doubt, Tiger Woods [ ... ]
golf
Everyone Should Know Who Lee Elder Is And His Importance To...
In 1903, black boxer Jack Johnson was forced to travel halfway around the globe to Australia for the [ ... ]
golf
Masters 2019: Jimenez, Woods, Daly? These Are The Coolest Golfers...
The 83rd Masters Tournament teed off this week in Augusta, Georgia and whilst most of the [ ... ]
golf
''Why Is A Bogey Called A Bogey?'' All The Answers To The Golf...
The Masters gets underway in Augusta today and the eyes of the sporting world will turn their attention [ ... ]
golf
Five Huge 2019 Masters Talking Points: Featuring Tiger Woods,...
All eyes will be on Augusta this Thursday when the greatest golfers in the land swing it out for the [ ... ]
golf
The Masters In Numbers: From Record Breaking Triumphs To Cracking...
Eighty seven players are set to tee off at the Masters this week, the joint-smallest Augusta field [ ... ]
golf
Irish Golfer Shane Lowry Hits Second Hole-In-One At British...
Shane Lowry produced a moment of brilliance on day two of the British Masters at Walton Heath as the [ ... ]
golf
English Golfer Eddie Pepperell Pings In Stunning Hole-in-One...
English golfer Eddie Pepperell has just scored a corking hole-in-one at the ninth at the Walton Heath [ ... ]
golf
Ryder Cup Flops Dustin Johnson And Brooks Koepka Star In The...
Team American jetted over to France last month looking to win their first Ryder Cup on European soil [ ... ]