Football
News
The Betfred Super League champions are set to put their faith in the former Great Britain full-back to step up from assistant coach
George Riley
16:00, 29 Sep 2022

The Betfred Super League champions are set to put their faith in the former Great Britain full-back to step up from assistant coach, as Woolf heads back to Australia after the World Cup to work with coaching great Wayne Bennett at The Dolphins.

Saints outclassed Leeds Rhinos at Old Trafford on Saturday to win an historic fourth Grand Final in a row, and a remarkable third triumph in three seasons at the club for Woolf.

The 42-year-old Wellens is part of England’s staff for the World Cup and has long been open about his desire to step into the big job at Saints, telling The Sportsman only last week that he is ready.

And as Woolf signs off with his own perfect treble, the baton will now be passed to his understudy to cement and extend Saints’ current dynasty.

These are big shoes to fill and those who know Wellens best believe he has all the ingredients to go to the very top in coaching.

But is it a gamble?

The more cautious rugby league observer will note that club legends are far from guaranteed to be inspirational leaders in the dugout or boardroom.

After leaving Leeds, and turning down a coaching role with the Rhinos, Kevin Sinfield ultimately could not resist the lure of going back to try and rescue the club’s fall from grace after his 2015 retirement. But even Sinfield found his impact minimal, his patience thin, and relationships strained.

It can be tough for an iconic and revered club figure to go in and make big, difficult, unpopular calls. Sinfield had to be prepared to lose friends, and did so. Wellens may need to be prepared for that too. 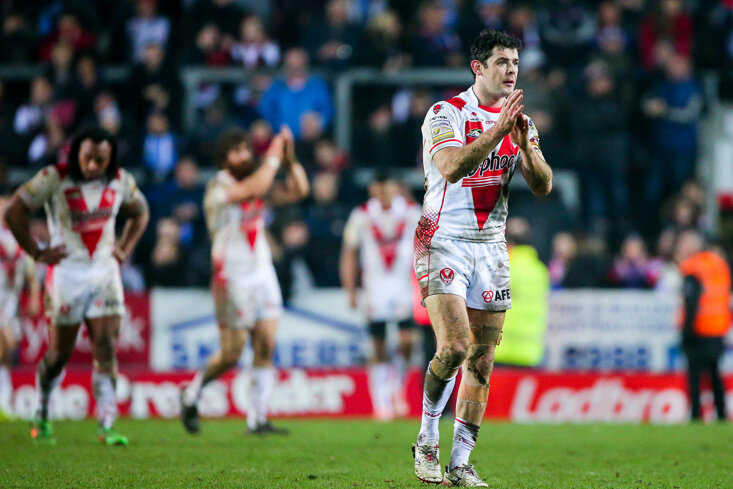 This doesn’t just go for rugby of course, as Paul Scholes and Alan Shearer will testify.

And there is previous at St Helens as their passionate fans know only too well.

Kieron Cunningham became the only Super League head coach with his own statue outside the stadium when he took charge of his beloved club for a couple of years between 2015 and 17. He was one of Saints’ greatest ever players.

Like Wellens, his former team-mate Cunningham had been assistant coach prior to landing the top job.

But despite inheriting the side that won the 2014 Grand Final, it didn’t go well for him. Two trophyless seasons were unable to even yield a Grand Final appearance, and he was sacked after 24 years with the club.

Saints described having to make that decision as “upsetting and disappointing”, and that was it for Cunningham, who stepped away from the sport.

But it does feel different with Wellens.

Saints believe he has ‘it’. An intelligent, analytical brain is allied to strong personal skills and a starting point within the dressing room of universal respect. Wellens lives, breathes, bleeds and sweats St Helens and his mates will joke that he has sounded like a head coach ever since he finished playing - arguably even before.

Again, none of the above guarantees any sort of success, and much may also rest on the coaching team he assembles around him. Interesting to note that another club legend Sean Long - who was assistant to Kieron Cunningham during that spell - is available after leaving Leeds.

But Wellens’ starting point could not be better.

A respected, popular Saints legend who has put the work in, learned the ropes, and formed the strongest of bonds within the club and wider game. He will also inherit the best side in the competition, brimming with talent, togetherness and toughness.

The to-do list will prioritise a fifth Grand Final win in a row, and maybe another Challenge Cup success too.