It’s the same every year. Almost as soon as the Vince Lombardi Trophy is awarded, attention turns to the trade market and free agency. Everyone’s got an opinion on every available player but it’s the 32 teams who have to be smart and make the right call.

So, of the business conducted so far, which deals stand out? Here are The Sportsman’s top 10 trades and signings of the off-season to this point.

This was exactly what Matt Ryan needed. Atlanta are a team in disarray, and Ryan should already have a Super Bowl ring to his name. Despite a host of setbacks and being sacked 40 times, Ryan still managed to throw for 3,968 yards and 20 touchdowns. The move to the Colts will give him an opportunity to get into the play-offs and potentially win the division. At 36, he’s in his fine-wine years, but many feel he’s got a lot left to give.

The Chandler Jones era in AZ comes to an end. The former first-round pick who began his career on one side of the States looks to be ending it on the other. He’s signed a 3-year, $52.5 million deal to join up with Derek Carr and co in Vegas in a move which demonstrates the Raiders’ commitment to pushing for an improved finish. Jones brings a considerable amount of leadership and physical prowess with him from Arizona, having notched up 208 tackles, 52.5 sacks and 15 forced fumbles in his five-year spell there.

Big Bobby Wagner was just as stunned as the rest of the league when it was announced that Seattle were releasing him. He wasn’t down in the dumps for too long as he secured a move to the Super Bowl champions in a five-year $50 million deal. The eight-time Pro Bowler is coming off his most productive season as a Seahawk in which he recorded 170 tackles, including 78 solo tackles and one sack.

The Cheetah has left KC in a move which surprised many, with Hill wanting to secure a contract that would put him amongst the biggest earners in the league. The Dolphins saw their opportunity and pounced, making Hill the highest-paid receiver ever in the NFL with a whopping $120 million contract split over four years. Hill has proved his money’s worth at the Chiefs, registering 111 receptions, 1,239 yards and nine touchdowns last season alone. Exciting times to be a Dolphin fan. 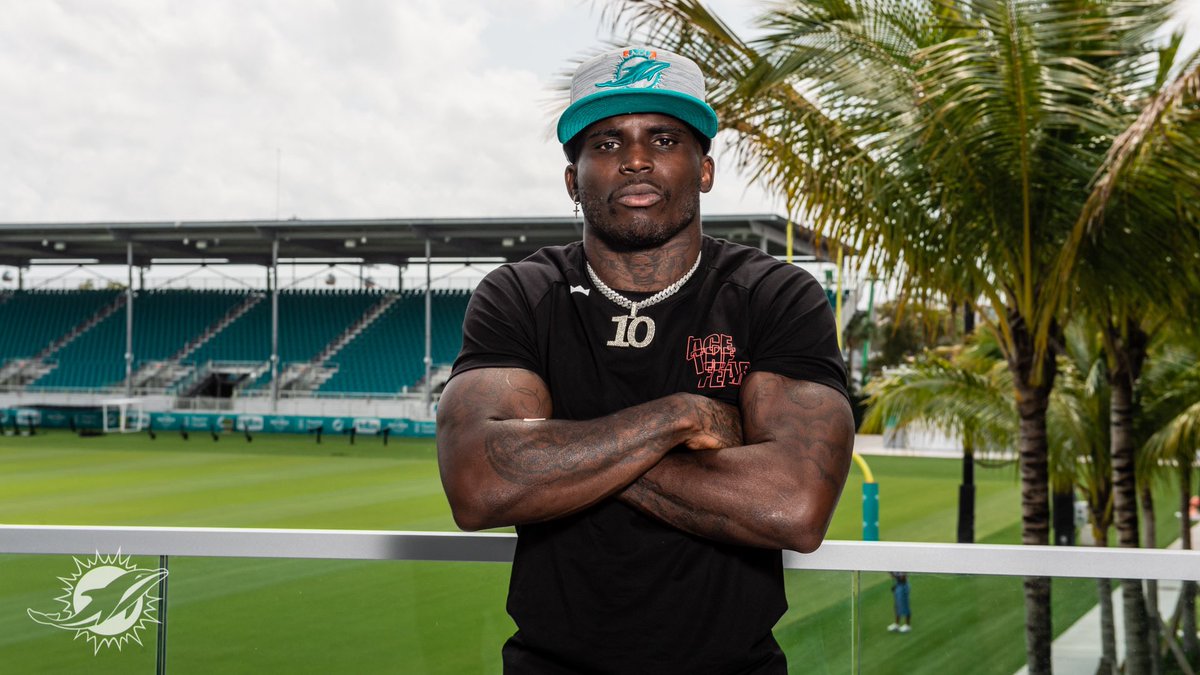 After spending his entire career in Denver until last season when he joined the Rams, Miller now heads ton Buffalo. Easy to see why he’s made the move though after the 33-year-old signed a six-year $120 million deal with $51 million guaranteed. The Bills were so unlucky to lose in the manner they did last season, and this signing could prove to be the difference-maker in their pursuit of a Super Bowl title. Miller will add a huge pass rushing threat to a team who recorded the second-lowest number of sacks in the league last year.

From an undrafted cornerback in 2018 to one of the most highly-rated corners in the league four years later, it’s been some journey for the J.C. Jackson. After not signing a new deal with the Patriots he was able to switch the east coast for the west and could prove to be a great signing for a Chargers side who lost games by such small margins last season. His eight interceptions in 2021 and place among the top 10 cornerbacks in the NFL have coaxed the Chargers to reward him with a five-year, $82.5 million deal that will see him stay in LA for a bulk of his prime.

One of the NFL’s most prolific rushers, Khalil Mack terrifies every offensive lineman he comes up against. In 101 games, Mack has racked up 420 tackles, 68 sacks and 18 forced fumbles. Even when he missed a majority of last season, Mack posted silly numbers and it appears the Chargers are determined to bolster their defence having already signed J.C. Jackson to join the current crop of Derwin James, Joey Bosa and youngster Asante Samuel. The Chargers are out for blood this year. 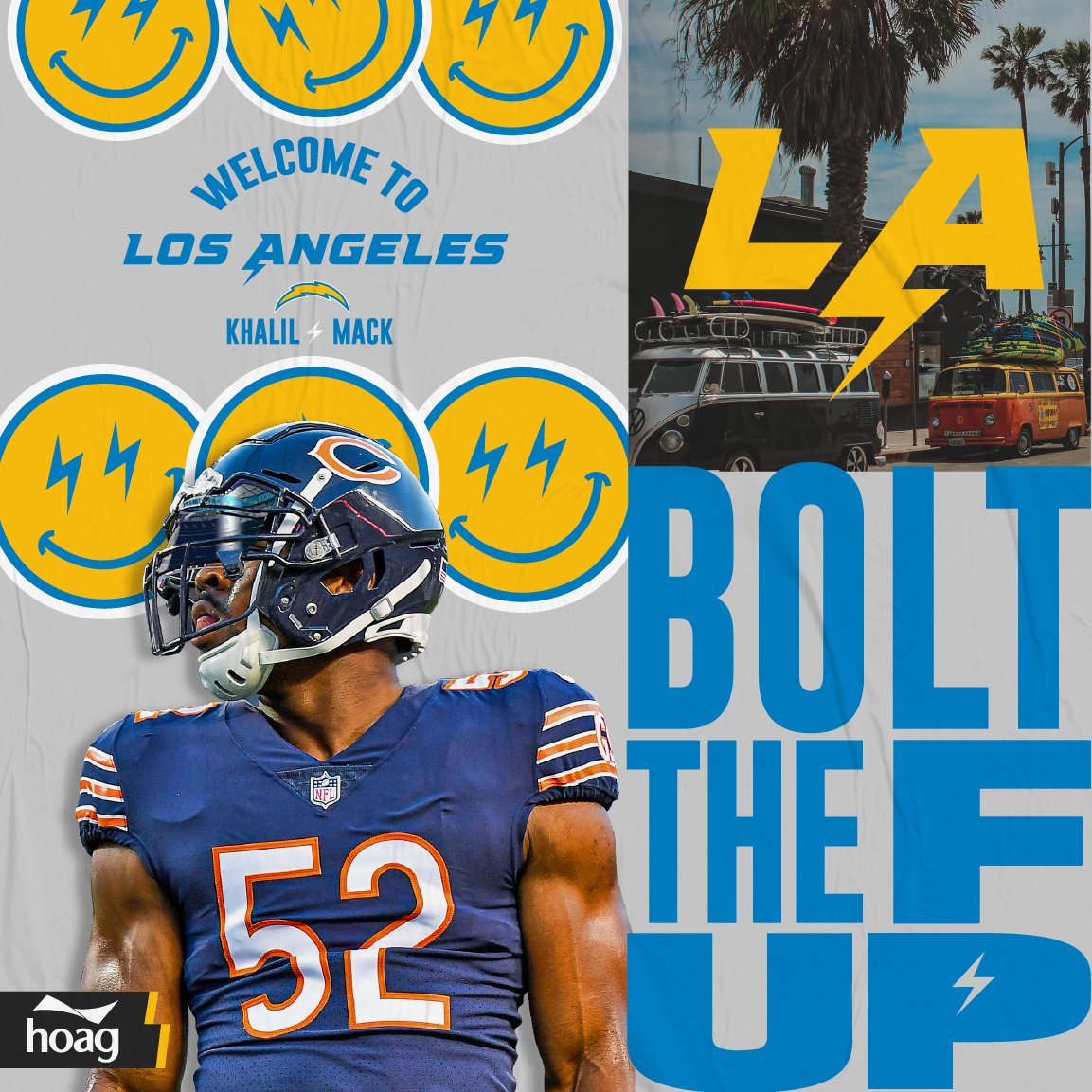 Yes, there are three people taking up one spot. Yes, it’s cheating. But it was easier to cheat than to decide which of these players will be most influential next season. The Bengals made it to the Super Bowl with one of the worst offensive lines in the league. They may have had character and ridiculous determination but that will only get you so far for so long. Now, they have done what everyone knew they needed to do in signing players to protect Joe Burrow. Burrow was sacked 70 times last season, and Cincinnati have addressed the issue with some top-notch players who are immediate, ready-made upgrades to the offensive line. What a time to be a Bengal. The jungle will be a frightening place for many years to come.

Davante has called it a day in Green Bay to join the Raiders on a five-year, $142.5 million deal with $67 million guaranteed. Arguably the best receiver in the league, Adams’ eight seasons with the Packers saw him record a first down on an astonishing 60% of his catches. Last season alone he registered 123 receptions, 11 touchdowns and 1,553 yards, and 68% of his catches resulted in a first down. The Raiders have secured the services of a top-three receiver in the league who is in his prime. Now blessed with an offence made up of Josh Jacobs, Darren Waller, Hunter Renfrow and Adams, the Raiders have become one of the most frightening teams in the AFC.

Wow. Russell Wilson is a Bronco. This trade was massive and opinions were split over who won it, but one thing for sure is that the Broncos are now divisional contenders and a team to keep a close eye on. The difference one player can make is incredible. Wilson is a natural leader, a determined character and has been one of the best QBs in the NFL since he was drafted in 2012. He’s a Super Bowl winner who boasts career stats of 37,059 yards, 292 touchdowns, 101.8 passer rating as well as 4,689 rushing yards. The long and short of it is that he is one of the best in the business, and the Denver Broncos should count their lucky stars that they’ve secured his services. Seattle begins a new era, and with a handful of draft picks acquired in the trade it’ll be interesting to see how they go about replacing the irreplaceable.

x
Suggested Searches:
The Sportsman
Manchester United
Liverpool
Manchester City
Premier League
More
us-sports
Colin Kaepernick, The NFL Star Rather Than Activist, Might Be...
Google Colin Kaepernick. There he is, the ‘American activist’. Check out Wikipedia. Oh yes, [ ... ]
us-sports
On This Day 20 Years Ago, The British Bulldog Davey Boy Smith...
On 18th May 2002, ‘British Bulldog’ Davey Boy Smith passed away from a heart attack at the [ ... ]
us-sports
NBA Playoffs Resume After Chaotic Exits For Champion Bucks And...
It’s been a tremendous few days in the NBA and this week’s conference finals, which start [ ... ]
us-sports
Ric Flair Returns At 73: The Nature Boy Will Walk That Aisle...
“To be the man, you gotta beat the man!” ‘Nature Boy’ Ric Flair has uttered [ ... ]
us-sports
There Are Storylines Everywhere You Look In The NFL's Week 1...
Something the NFL seem to be willing to do is make their sport a spectacle through their own power. [ ... ]
us-sports
Chuck Daly: 'Daddy Rich' Tamed Rodman, Bagged Isiah His Rings...
Entering a debate on the greatest sports sides in history should inevitably reach a particular conclusion. Avoiding [ ... ]
us-sports
'We Want RK-Bro! We Want The Usos!': No One Is Safe From Sasha...
When WWE Women’s Tag Team champions Sasha Banks and Naomi first joined WWE, the landscape was [ ... ]
us-sports
Everything You Need To Know About WWE WrestleMania Backlash
The wait ends this weekend, as WWE returns with their first Premium Live Event since WrestleMania. This [ ... ]
us-sports
The Crazy Times Of Kareem Abdul-Jabbar, The NBA All-Star Who...
This article first appeared in The Sportsman on 05/05/20 Being the number one draft pick in the NBA [ ... ]
us-sports
Blood Brothers: Randy Orton And Riddle Talk Chemistry, Growing...
The old adage dictates that opposites attract, and on the face of it that certainly seems true of RK-Bro. [ ... ]
us-sports
Impact Wrestling's D'Lo Brown: We Didn't Open The Forbidden...
It is such an overused phrase that it has become cliched, but Impact Wrestling’s D’Lo Brown [ ... ]
us-sports
How ‘The Last Dance’ Brought Michael Jordan's Chicago Bulls...
It's now been 26 years since the Chicago Bulls ended the NBA season with a record of 72 wins and [ ... ]
us-sports
On This Day In 2018: WWE Icon Bruno Sammartino Passes Away
There have been 30 WWE Championship reigns in the last 2,803 days. In the 2,803 days between 17th May [ ... ]
us-sports
Why Jackie Robinson Day Means As Much Today As It Ever Has
Across Major League Baseball on Friday, number 42 will pitch to number 42. Number 42 will field the [ ... ]
us-sports
Frank Vogel Out: Who’s Next In The Hot Seat For The LA Lakers?
Head Coach Frank Vogel has paid the price for the Los Angeles Lakers’ poor campaign, as they failed [ ... ]
us-sports
British Invasion: WWE Announces Its First UK Stadium Show In...
WWE will host their first UK stadium show in 30 years this summer, with the American sports entertainment [ ... ]
us-sports
Giannis, Embiid Or Jokic: The Wide Open Race To NBA Most Valuable...
The race to become the NBA’s regular season MVP has never been tighter. Giannis Antetoukoumpo [ ... ]
us-sports
One Champ To Rule Them All: Lesnar Takes On Reigns On WrestleMania...
We are halfway through WrestleMania weekend, and now that you’ve finally processed what happened [ ... ]
us-sports
WWE’s Combat Sport Crossovers Have Given Us WrestleMania Moments...
This weekend, two former UFC Champions will headline WWE’s most marquee of events, WrestleMania. [ ... ]
us-sports
Return of the Rattlesnake: Stone Cold Leads WrestleMania Saturday
WrestleMania 38 is almost here, as WWE prepares to stage its biggest shows of the year. Nowadays, the [ ... ]
us-sports
The Show of Shows: The Best Match From Every Single WrestleMania
WrestleMania weekend is upon us, as WWE prepares to stage the 38th edition of the biggest event in professional [ ... ]
us-sports
The Lion and The Hyena: 25 Years On From The Most Important...
“These people are standing, can you imagine the pain that is racing through Austin’s body? [ ... ]
us-sports
Stone Cold Steve Austin Accepts Kevin Owens' WWE WrestleMania...
“Whether you want to call this ‘The KO Show’, a match, a fight, a brawl. Whatever. [ ... ]
us-sports
30 Years Since LA Lakers Retired Magic Johnson's 32, His True...
During this week, back in 1992, the LA Lakers chose to retire the number 32 jersey worn by the [ ... ]
us-sports
Michael Jordan At 59: The Man Who Changed What It Meant To Be...
In the summer of 1998, Michael Jordan won his final NBA Championship with the Bulls. Six months later, [ ... ]
us-sports
Everything You Need To Know About WWE Elimination Chamber
WWE returns to Saudi Arabia this Saturday for Elimination Chamber. After a relationship between WWE [ ... ]
us-sports
Any Given Dre Day: Hip Hop Royalty Rules The Super Bowl
The Los Angeles Rams are your Super Bowl Champions, beating the Cincinnati Bengals 23-20 to lift football’s [ ... ]
us-sports
NFL Super Bowl: Los Angeles Rams Battle To Heroic Super Bowl...
A rousing speech from the Rock set the atmosphere for what was about to unfold. This game had it all [ ... ]
us-sports
NFL Super Bowl LVI Preview: Ask The Fans - Cincinnati Bengals...
You ought to have read our NFL Super Bowl previews on the Cincinnati Bengals and the Los Angeles Rams [ ... ]
us-sports
NFL Super Bowl Preview: Everything You Need To Know About The...
It has been some year for the Los Angeles Rams. They kickstarted their campaign with comfortable wins [ ... ]