Welcome to The Panel, where we speak to a group of star names from across the fight game about the big issues in boxing. In this edition, we take a look at the reality of championships in the “four-belt era”.

The question we posed to our experts, spanning world champions, trainers and promoters, was this: would boxing be better off with one champion per division? Here’s what our panel told The Sportsman, drawing on their collective decades of experience in the sport.

It's something interesting maybe that we have four belts. But in the light heavyweight division, I want only one man who has four belts and I would like to be this man.

I think you should always look to have one champion per division. I think that's again, one thing about female boxing. That's, you know, so refreshing at the moment is you have so many undisputed champions across the division because the champions are willing to fight the champions. So we should always look to unify one division at a time, and we should have one champion per division rather than four champions. But ultimately, it doesn't always happen like that. But yes, I think we always need to find out who the best is in every division.

There's going to be lawsuits going on “My fighter deserves this and that”. Also, there’s going to be so many fighters who wouldn't get the opportunity. People go, “Oh, go back to the 50s, the 40s, do one world champion.” But there's so many fighters who were robbed of a chance to be a world champion or to fight for a world title. They didn't have the opportunity as a fighter can only fight so many times a year. 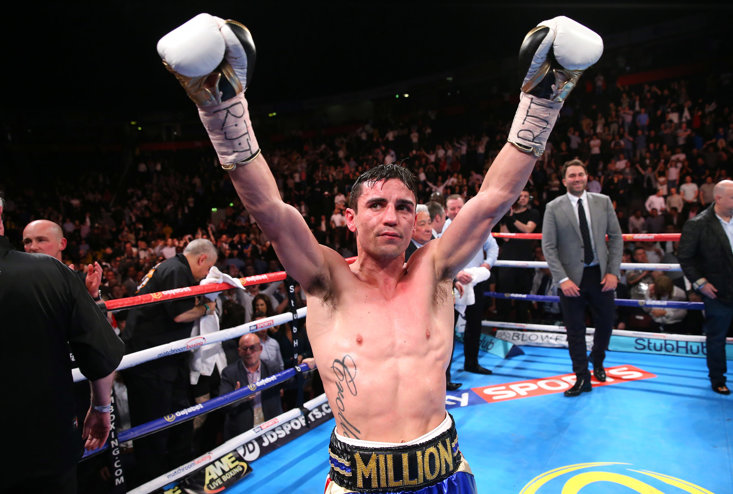 Joe Gallagher (The Ring Magazine Trainer of the Year 2015)

We'd all love to turn back time and have one single champion. I think that's where The Ring belt (comes in). I think people realise whoever The Ring champion is, that’s the real champion. They're recognised as the number one in the world.

I think the idea of four belts is great, that you can go and get different belts in different divisions. Having four belts is nice when you've won them all. But I do think a model such as the UFC can stop the dilution of champions. You can have a WBC champion who's ranked number eight in the WBA or the WBO.

I think the UFC has got a good model that the fans like. The number one fights the number two then if they win, one fights three (then)  one fights four. I think that's the way that it should be. It makes the superfights easier to make, if it was like that. But, it is also nice to have three belts, four belts.

The Verdict: The word “opportunity” was brought up a lot, with many of our group feeling more world title shots for fighters is a positive. Surprisingly, promoter Hearn leant towards a single champion, despite the fact it would limit the amount of world title fights he could promote. Crolla perhaps raised the most interesting point. While it would be ideal to have one champion, boxing has gone too far down the road of having four to turn back now. If our experts are to be believed, it looks like the four-belt era is here to stay.

x
Suggested Searches:
The Sportsman
Manchester United
Liverpool
Manchester City
Premier League
More
boxing
Don't Wait Until Retirement To Appreciate The Hall of Fame-Bound...
Too often in life, we leave it too late to appreciate what we have. Sport is one of the guiltiest avenues [ ... ]
boxing
Boxing's First Tag Team Match And The Weirdest Combat Sports...
Combat sports is in a weird place. The most famous fighter on the planet is a YouTuber who has never [ ... ]
boxing
Anthony Yarde's Defeat To Artur Beterbiev Did More Good Than...
If a fight looks like Mission Impossible and sounds like Mission Impossible, sometimes it simply is [ ... ]
boxing
Caleb Plant Vs David Benavidez: Five Boxing Stories You Might...
With the afterglow of one big British card behind us in Liam Smith vs Chris Eubank Jr and the anticipation [ ... ]
boxing
Why Brave Anthony Yarde Is The Cure For The Common Boxer
In a world with four recognised sanctioning bodies, several unrecognised sanctioning bodies and a litany [ ... ]
boxing
Announcement Imminent: Anthony Joshua Vs Jermaine Franklin At...
Two-time unified heavyweight champion Anthony Joshua is reportedly set to fight Jermaine Franklin at [ ... ]
boxing
Artur Beterbiev And The Hardest Hitting Light-Heavyweights In...
Boxing fans will be treated to one of the hardest-hitting match-ups of the year this weekend when unified [ ... ]
boxing
Floyd Mayweather Vs Aaron Chalmers: Everything We Know So Far
Floyd Mayweather will return to the ring next month to take on former Geordie Shore star Aaron Chalmers [ ... ]
boxing
Boxing's Doomed Superfight: The Long Road To Josh Taylor Vs...
One of the most hotly anticipated fights in British boxing has been delayed yet again. WBO super lightweight [ ... ]
boxing
See You At The Crossroads: What Next For Chris Eubank Jr And...
Liam Smith vs Chris Eubank Jr had all the hallmarks of a crossroads fight. While they are only a year [ ... ]
boxing
Artur Beterbiev Vs Anthony Yarde: Everything You Need To Know...
Boxing fans will be treated to one of the hardest-hitting match-ups of the year this weekend when unified [ ... ]
boxing
Mersey Beat: Liam 'Beefy' Smith Stuns Chris Eubank Jr With Fourth...
Liam Smith stunned Chris Eubank Jr at the Manchester Arena, stopping the pre-fight favourite in four [ ... ]
boxing
Poles Apart: Richard Riakporhe Stops Two-Time World Champion...
Richard Riakporhe scored the biggest win of his career so far, steamrollering former two-time world [ ... ]
boxing
Leave The Memories Alone: Kell Brook Shouldn't Return To Face...
Boxxer CEO Ben Shalom says former IBF welterweight champion Kell Brook is “desperate” to [ ... ]
boxing
Citizen Of The World Alex Dilmaghani Focused On Global Domination
“Why don’t they play football? This is a sport where you get hit and hurt. The way some [ ... ]
boxing
The Day Ali Talked A Suicidal Man Down Off The Ledge Of A Beverly...
Wilshire Boulevard in Los Angeles cuts right through the heart of Beverly Hills. One particularly famous [ ... ]
boxing
Lucrative February Showdown Between Jake Paul And Tommy Fury...
Could it be third time lucky for a blockbuster showdown between Jake Paul and Tommy Fury? Well, according [ ... ]
boxing
''I Shook Up The World!'': The Moment Cassius Clay Truly Became...
On what would have been his 81st birthday, it is only appropriate to pay tribute to the cultural [ ... ]
boxing
Chris Eubank Jr Vs Liam Smith: Everything You Need To Know
Chris Eubank Jr and Liam Smith kick off the New Year in style this weekend when they descend on the [ ... ]
boxing
How To Watch KSI Vs FaZe Temperrr: Undercard, Time, Venue And...
The show must go on. After Dillon Danis’ withdrawal, KSI will now fight gaming YouTuber FaZe Temperrr. [ ... ]
boxing
Australian Heavyweight “One Of The Frontrunners” To Fight Anthony...
Two-time heavyweight world champion Anthony Joshua is expected to return to the ring in April looking [ ... ]
boxing
KSI Vs FaZe Temper: Everything You Need To Know
KSI returns to the boxing ring this weekend as the latest Misfits card hits Wembley Arena. The YouTuber-turned-boxer [ ... ]
boxing
All Aboard: Get On The Jesse 'Bam' Rodriguez Hype Train Before...
You can count on one hand the boxers who had a better 2022 than Jesse ‘Bam’ Rodriguez. The [ ... ]
boxing
Women's Boxing Picks Up Where It Left Off In 2022 With A Huge...
If you thought women’s boxing was leaving its big, history-making nights in 2022 then think again. [ ... ]
boxing
Triple Threat: Eddie Hearn's Three-Fight Plan To Revive Anthony...
Matchroom Sport chairman Eddie Hearn has mapped out Anthony Joshua’s road to heavyweight redemption. [ ... ]
boxing
Manny Pacquiao Signs For Rizin, But Are Exhibitions Damaging...
Manny Pacquiao has announced he will return to the ring for Japanese MMA company Rizin Fighting Federation [ ... ]
boxing
Look Out Spence And Crawford: Could 2023 Be The Year Of Jaron...
Jaron Ennis returns to the ring on Saturday 7th January, ready to kick off what could be the defining [ ... ]
boxing
Auld Lang Syne Of The Times: Boxing's 2023 New Year's Resolutions
With Christmas out of the way, as we emerge from our turkey-comas and blink into the light of 2023, [ ... ]
boxing
From ‘Bam’ To ‘Big Baby’ - Five Boxers to Keep An Eye On In...
Another year in the ring is about to come to a close. We’ve already run through our favourite [ ... ]
boxing
Why Natasha Jonas Is The Sportsman's Women's Boxer Of The Year
2022 was truly the year of women’s boxing. Katie Taylor and Amanda Serrano headlined Madison Square [ ... ]