Football
News
The Real Ibrahimovic Dream Team: Only One Player Allowed From Each Mighty Zlatan Side
Jack Porter
17:01, 08 Jul 2019

The Los Angeles Galaxy man has opted for a 4-3-3, his choices interesting to say the least. For a player who has journeyed from Sweden to the Netherlands, Italy, Spain, France, Italy, and eventually to the USA, he had an absolute smorgasbord of options to select from, perhaps unparalleled.

Up front the 37-year-old Swedish superstar spearheads his attack, obviously. He’s flanked by none other than Zlatan. On both sides.

A strong, imposing central midfield to terrify any opposition has a three-strong Zlatan centre in front of a back-four of Ibrahimovics.

“My favourite team of all time. I only have to decide the coach. Maybe will be Zlatan” said the inimitable forward on his social media account @ibra_official.

Back in December 2018, Zlatan has posted a more well-thought out version of his ‘Dream Team’, players he has played alongside, this time indeed opting to select his former Juventus compadre Buffon in goal with a defence of Lilian Thuram, Thiago Silva, Alessandro Nesta, and Maxwell. In midfield he included Patrick Vieira, Xavi, and Pavel Nedved.

Producing a fearsome attack there is Ronaldinho and, despite his troublesome spell at Barcelona, Ibrahimovic opted to select five-time Ballon d’Or winner Lionel Messi.

However, to challenge Zlatan - and few would be so brave or naive to do so - we’ve concocted our own XI. With a twist.

As one of the few players to have completed in De Klassieker, the Derby della Mole, the Derby della Madonnina, El Clásico, Derbi barceloní, Le Classique, and the Manchester Derby, we wanted to compile a team befitting his journeyman status treading the upper echelons across the European elite.

For this ‘Dream Team XI’, there must be at least one player selected from each side to accompany the mighty Zlatan, who plays up front. Maxwell gets a free pass.

Zlatan Ibrahimović
@Ibra_official
My favourite team of all time. I only have to decide the coach. Maybe will be Zlatan 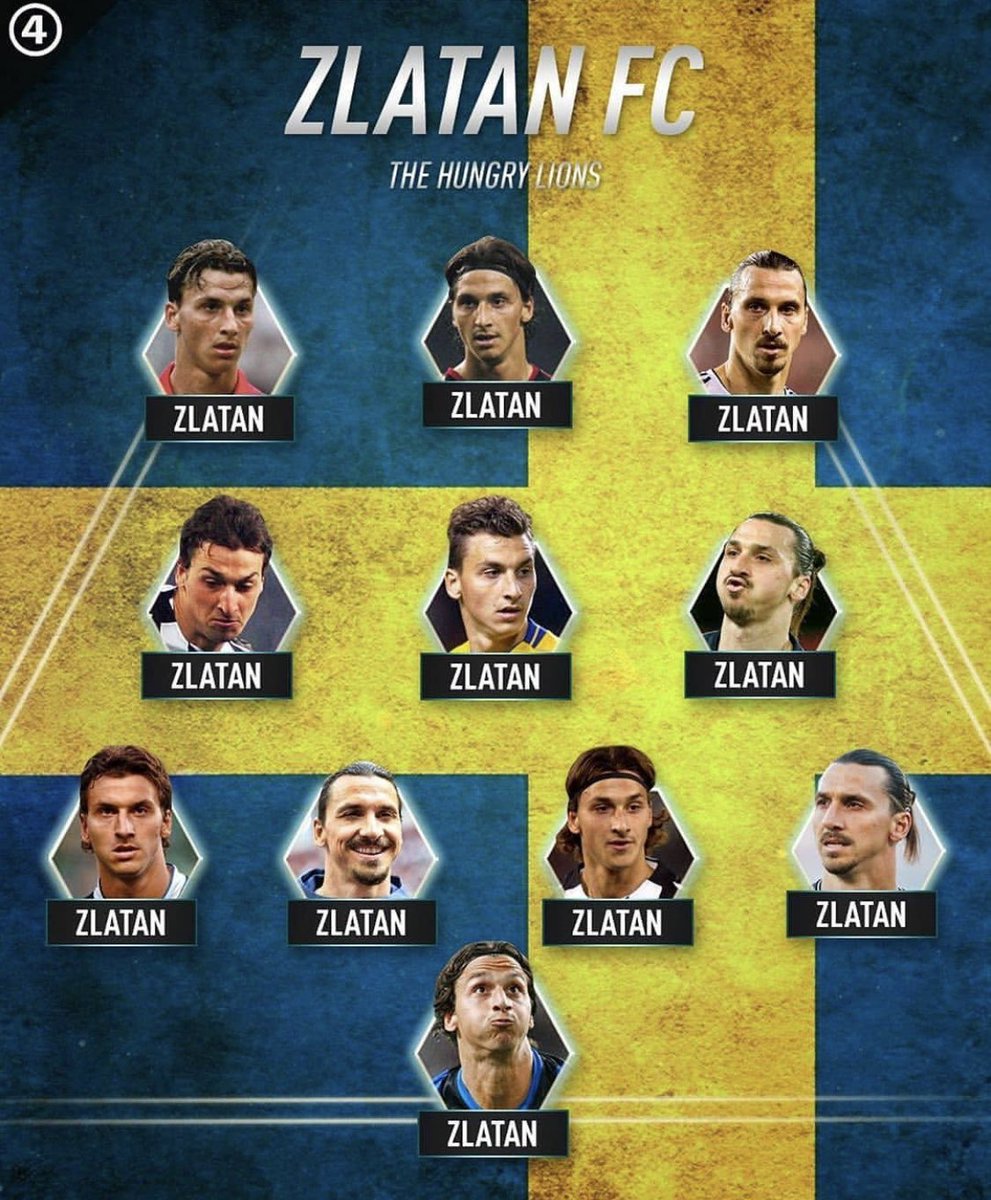 Zlatan arrived on the back of De Gea’s third of a hattrick of Sir Matt Busby Player of the Year awards in 2016. Together they won the League Cup and the Europa League.

A real Malmo man having made the leap from player (across two spells with an intermittent period at FC Tirol) to assistant coach . Won the Allsvenskan in 2004.

Still the last defender to win the Ballon d’Or (2006), Cannavaro at one point was Italy’s most-capped player and memorably lifted the World Cup as Azzurri captain.

Simply one of the greatest centre-backs of all time.

Bit of a cheat this one, as Maxwell and Zlatan were like two peas in a pod throughout their career; signing contracts at each of the mentioned clubs in exactly the same year! They collected a monumental haul of trophies together, including each league title with each of the four clubs.

The Frenchman’s best years may certainly have been at Arsenal but Vieira went on to great success back in Italy. Like Ibrahimovic, Vieira quickly switched Serie A allegiances to Inter after the Calciopoli in 2006. He claimed four Scudettos from his time with the Nerazzurri.

Dos Santos recently scored the winning goal that allowed Mexico to claim the coveted Gold Cup over the USA. The former Barca and Villarreal man was reunited with his old teammate on the West Coast in March 23, with Zlatan swapping the City of Manchester for the City of Angels.

Arguably the greatest Finnish player of all time, the two won the Eredivisie together in 2003/04, the last time either of them would be at the club. In some ways had an opposite trajectory to Ibrahimovic.

The heir apparent to Zlatan’s reign in the French capital, Cavani eventually took over the Swede as Les Parisiens’ all-time top goalscorer and is closing in on the milestone 200.

Perhaps, quite simply, despite them playing only one season together and the Argentine’s rise directly contributing to Ibrahimovic’s blaugrana blues, even Zlata felt fit to include arguably the greatest attacking player of all time.