Football
News
There's a seeming reluctance to establish a synergy between the men's and women's game and it is holding the sport back
Joey Mills
08:32, 09 Sep 2021

The Women’s Super League is enjoying a high profile at the moment, thanks to a bumper TV deal with Sky and the BBC making the competition more visible than ever. WSL fixtures are advertised alongside Premier League games on Sky Sports broadcasts. NOW TV billboards showing Manchester United’s Edinson Cavani and Chelsea’s Sam Kerr side-by-side have been erected around the country. The message from broadcasters is clear: the WSL deserves your attention.

There is a clear effort for the women’s game to be seen as part of the average viewer’s football-watching routine. By advertising the games alongside men’s matches, the WSL feels less ghettoised. It is no longer treated as ‘other’, or a lesser form of the game we follow. It is matter-of-factly treated as simply more games for us to enjoy. The approach is a refreshing one, and though we are only at the start of this new broadcasting deal, it does bode well.

Convincing fans that women’s football is as worthy of their time as the men’s game they are conditioned to follow is another matter. We are in a period of re-education. Fans groomed to care only about the men’s side they have probably followed their whole lives, will need to be eased into the idea of following another group of talented players wearing the same colours. This is where the clubs need to do more.

The modern way to school fans about their club’s women’s side is through social media. Chelsea, already leaders on the pitch as the reigning WSL champions, have led in this area off the pitch. The Chelsea men’s team account retweeted Chelsea FC Women’s tweet ahead of their game against Arsenal on Sunday. A simple gesture, but a valuable one. At time of writing, the WSL team’s account has 398,000 followers. The men’s team account has over 17 million. The potential to get new, already Chelsea-invested eyes on the women’s side is a tremendous opportunity.

Sadly, it is not an opportunity every club has taken. Manchester United WFC played Reading Women in Sky’s Friday night game. However, if you are one of the 26,758,000 people who follow the United men’s account without following the women’s one, you would not have been informed of this fixture. Despite being able to advertise their WSL game at the literal push of a button, the club could not find a place to mention it between multiple tweets reminding fans that they signed Cristiano Ronaldo a week ago. 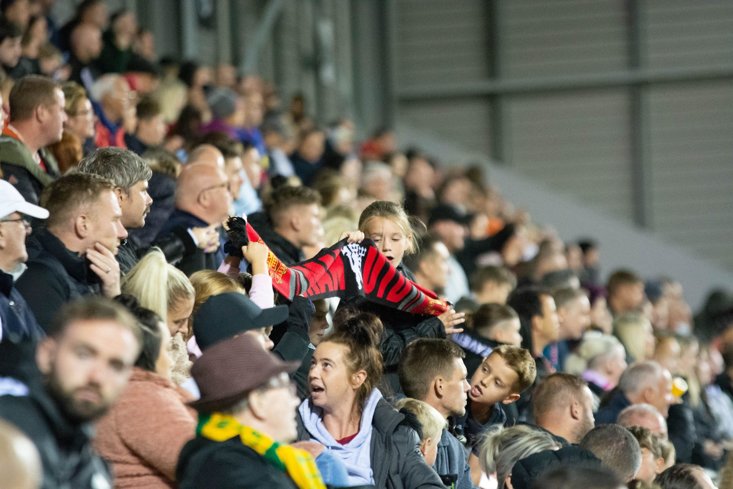 This seeming reluctance to establish synergy is holding the sport back. Not seeing women’s football treated as an important part of a club fosters an environment of dismissal. Sexism is still rife in the way some people interact with women’s sport, espoused by those who believe so passionately in free speech that they’re willing to say idiotic things while hiding behind an anonymous screen name and an avatar. These people will never be converted to women’s football, so threatened are they by the thought of women being allowed to simply exist and make their own decisions while doing so.

But the current model at many clubs is not helping to snare the floating voter. There are fans who would enjoy women’s football, and perhaps would embrace it enough to attend games and help increase the improving attendances of the WSL. But the message from several clubs is that the women’s team is just an appendage, they are a footnote reserved for three lines in the matchday programme, to be forgotten until the next time you happen to catch Sky Sports News just before the top stories roll over again on the hour.

But what if more clubs took the Chelsea approach? What if the massive social media followings they boast were mobilised, if they were shown goals and action from WSL games? With more people consuming sport through their phone than at any point in history, why not deliver WSL content to an audience that is already predisposed to love anything that comes wrapped in your club badge?

You have lost the sexists. The fans who think replying “go back to the kitchen” on a WSL video is the height of comedy are not going to join the cause. But the young fans, the fans who are already obsessed with your club, and who never put down their smartphone? Those fans are there for the taking. Most of them do not care about anything other than watching good football, and the Women’s Super League offers plenty of that.