Football
News
Brighton got another late goal as the spoils are shared on the south coast
Simon Lillicrap
22:12, 14 Jan 2022

The rivalry defined by late goals in its recent history produced again. Just when it looked like Crystal Palace had pulled off another AMEX robbery, a theft of three points from their nearest rivals, Brighton produced another significant late goal to salvage a 1-1 draw.

Just as they did at Selhurst Park on the last two visits, through Alexis Mac Allister and Neal Maupay, this time the Seagulls rescued a point on home soil through a fortunate own goal. For the third consecutive Premier League home match against their fiercest rivals, Brighton completely dominated the match and yet it looked like they were going home empty handed after Conor Gallagher’s opener, before Joachim Andersen’s own goal shared the spoils.

Patrick Vieira’s side, just as Roy Hodgson’s boys had done in the previous two seasons, were defensively resolute for the majority of the match even if, by every metric, Brighton should have won this match. The visitors, staggeringly, have ​​now scored with their last four shots on target against Brighton at the Amex Stadium.

Four shots, over three visits that has resulted in seven points, which was so nearly the full nine. Talk about efficiency. This time it was Gallagher’s solitary strike on goal that earned all that sent shockwaves along the south coast, after the hosts had seen a first half penalty stopped by Jack Butland.

Graham Potter’s side took the initiative and Leandro Trossard was presented with a huge chance early on after a Joel Ward error sent him through one on one, but Butland was there to deny him from close range and keep the scores level. It was a remarkable night for the Englishman, who is still second choice at Palace, but could force his way back into England recognition if he can seize that spot from the absent Vincente Guaita on a permanent basis.

In a scrappy opening with few chances, Will Hughes’ close handling of Joel Veltman from a corner was enough for VAR to take the referee Rob Jones to the monitor, and a penalty was awarded.

The Sportsman
@TheSportsman
🌟 10 goals and assists in the Premier League for Conor Gallagher this season!
📹 @SkySportsPL
#BHAPAL | #CPFC 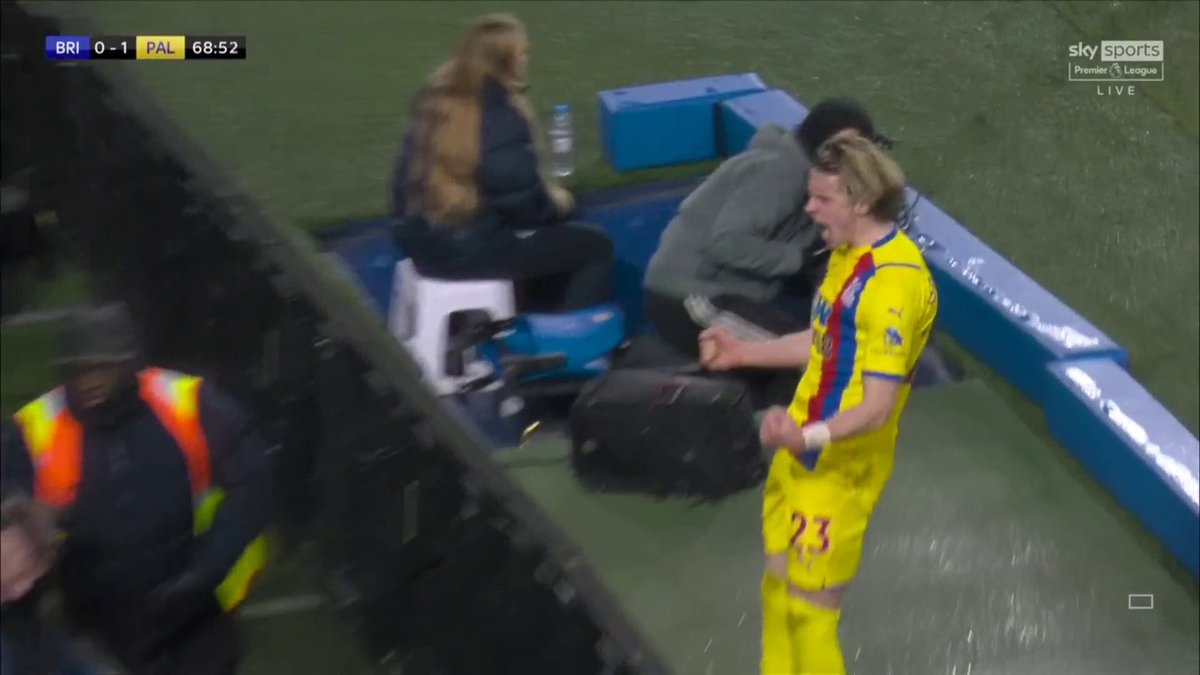 As a Palace flare came onto the pitch, amid a cloud of red smoke, Pascal Gross poorly struck his penalty down the middle and Butland stopped it with his legs to the delight of the fans packed in behind that goal. Intriguingly, Brighton had taken three successful penalties and those three takers, Alexis Mac Allister, Trossard and Neal Maupay were all on the pitch when Gross stepped up to miss. Yet from the resulting corner, Brighton thought they had silenced their fierce rivals. Maupay challenged Butland after he had the ball in two hands and bundled the ball into the net, but VAR ruled the goal out as the rivalry came alive in the space of two minutes.

After the break, Brighton once again pressed forward as Jakub Moder lifted a chance over the bar after more great work from Mac Allister. Tariq Lamptey came on for the injured Adam Lallana but as Brighton pressed, they still couldn't find the breakthrough.

So many times before we have seen it, but Graham Potter’s men were unable to find the breakthrough, and then they were punished. Jeffrey Schlupp broke into the box and managed to cut the ball back for Conor Gallagher, who took a touch and poked the ball into the Brighton net. He’d barely had a touch all game but once again came up big in key areas for Palace. In the stand behind the goal, after they had watched Butland stop a penalty in the first half, they celebrated a goal that meant so much.

When it looked like Brighton had run out of options, with just four minutes left, Maupay broke into the box and fired the ball across goal where Andersen poked into his own goal, through the desperately unlucky Butland.

It was a fitting end to the latest chapter of this rivalry, which has given us so much over the last few years.