AEW returns to pay-per-view with All Out on Sunday night, broadcasting live from the Now Arena in Chicago, Illinois. The main attraction is the in-ring return of CM Punk. The ‘Best In The World’ has not wrestled since the WWE Royal Rumble in 2014, and his comeback has been the most anticipated event in wrestling for the entirety of the years that followed. Beyond Punk, the card boasts a heady mix of wrestling legends (Paul ‘Big Show’ Wight, Sting, Chris Jericho), modern greats (Kenny Omega, Jon Moxley, the Young Bucks) and future main eventers (Punk’s opponent Darby Allin, MJF). Here’s a rundown of the biggest matches from this weekend’s show.

CM Punk has done a lot in the seven years since he last stepped inside a wrestling ring. The Chicago native has written for Marvel Comics, starred in movies, tried his hand at TV presenting and fought twice in the UFC. But anyone who witnessed the stellar career of this most singular of talents knows that the ring is where he truly belongs.

Darby Allin is a brilliant choice of opponent from AEW. The young daredevil has ‘future main eventer’ written all over him, with his gothic aesthetics and and aerial theatrics marking him out as a Jeff Hardy successor. The former TNT Champion will be flanked by ‘The Icon’ Sting, and the thought of things getting physical between Punk and the Hall of Famer is an enticing one.

No matter what happens on the rest of the card, this will be the match people are talking about come Monday morning. The crowd reaction is likely to be deafening, as it was when Punk returned to wrestling in this same building a few weeks ago. The intrigue surrounding how Punk will look, move and wrestle is palpable. This one promises to be memorable.

A rare clash between two world champions, Kenny Omega defends his AEW gold against the Impact World Champion Christian Cage. The former WWE superstar defeated Kenny for that title a few weeks ago on Rampage, striking the first blow against Omega’s status as ‘The Belt Collector’.

The AEW Champion had amassed a veritable trophy cabinet, unifying the AEW, AAA, Impact and TNA straps. Cage annexed the latter two, before unifying the TNA belt with the Impact one to make a single championship.

These two high-class Canadians constructed a superb scrap last time out, and this rematch has all the ingredients to be even better. 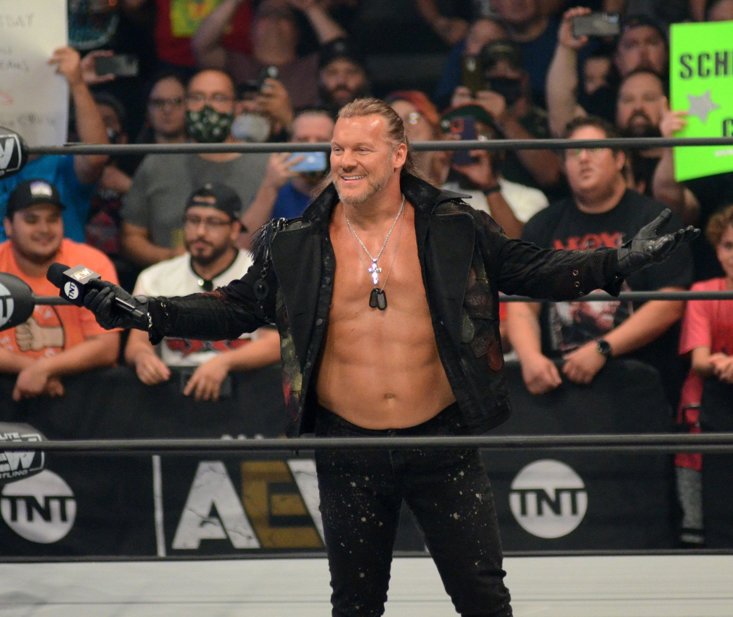 This has been a long-brewing feud between one of wrestling’s biggest names and the acid-tongued firebrand of a new generation. MJF joined Jericho’s Inner Circle faction, before turning on them earlier this year to form his own group named The Pinnacle. As a seething Jericho demanded a match with his betrayer, Maxwell Jacob Friedman insisted he must first complete ‘The Labors Of Jericho’, a series of matches against opponents of MJF’s choosing.

Jericho negotiated clashes with Shawn Spears, deathmatch icon Nick Gage, old rival Juventud Guerrera and MJF’s right hand man, Wardlow. For the fifth ‘Labor’, Jericho was defeated by MJF himself. In order to secure this rematch, Jericho has had to put his career on the line.

A true crossroads clash, Jericho himself was once the brash, youthful heel that MJF now embodies. If this does end up being the last match in an incredible three-decade career, Chris Jericho will have come appropriately full circle.

Two of the very best tag teams on the planet will meet inside a steel cage, in a bout that could easily walk away with Match of the Night honours. These teams met in an incredible ladder match at this event in 2019, putting on an exhilarating stunt-show. The nature of the cage match format, a stipulation that gives the wrestlers plenty of high surfaces to jump from, should lead to this being every bit as stunning.

Penta El Zero Miedo and Rey Fenix earned this title opportunity by defeating Jurassic Express in a tournament final, while the Bucks are currently ten months into their reign atop the tag team division.

The rest of the card is similarly loaded. The Artist Formerly Known As The Big Show, Paul Wight, makes his AEW in-ring debut against QT Marshall. The AEW Women’s Championship is on the line as Dr Britt Baker, D.M.D, takes on the other-wordly Kris Statlander. Miro defends his TNT Championship against Eddie Kingston, in a match that promises violence. In a purist’s dream match, Jon Moxley takes on Japanese legend Satoshi Kojima, in a clash that is sure to redefine the term ‘hard-hitting’.