Football
News
The Bees are back in the top flight for the first time in 74 years after beating Swansea at Wembley
Kris Voakes
16:56, 29 May 2021

It took them 10 goes, but Brentford finally broke their play-off duck and reached the promised land on Saturday. For the first time in 74 years, the Bees are a top-flight club, and one of the best-run clubs in English football has secured the Premier League status in has long deserved.

Having fallen short in nine previous play-off campaigns spanning 30 years, Thomas Frank led his side to a 2-0 victory against Swansea City in the Championship final. The nature of their performance was entirely in keeping with their fantastic footballing philosophy and the complete antonym to their many failed ventures at this stage in years gone by.

Ivan Toney and Emiliano Marcondes struck early as the west London club finally brought a big-game performance to the grand stage. Ten months on from their most gut-wrenching of near-misses, losing their final two games to miss out on automatic promotion and then being done over by neighbours Fulham in the play-off final, this was a Brentford side that meant business and left Swansea with no real answer.

Toney finished confidently from the spot in the 10th minute after Freddie Woodman had felled Bryan Mbeumo as the Brentford man looked to round the keeper, but more elation was not far behind for the Bees supporters in attendance with their side doubling their advantage before 20 minutes had come up on the clock.

Mbeumo was found with a quick ball out and Brentford suddenly had a two-on-two counter cooking. By the time Mads Roerslev joined the break and collected Mbeumo’s pass in the box it appeared that the chance might have gone, but the Dane picked out the onrushing Emiliano threw a crowd of retreating defenders with a sumptuous pass which was rifled home with aplomb. 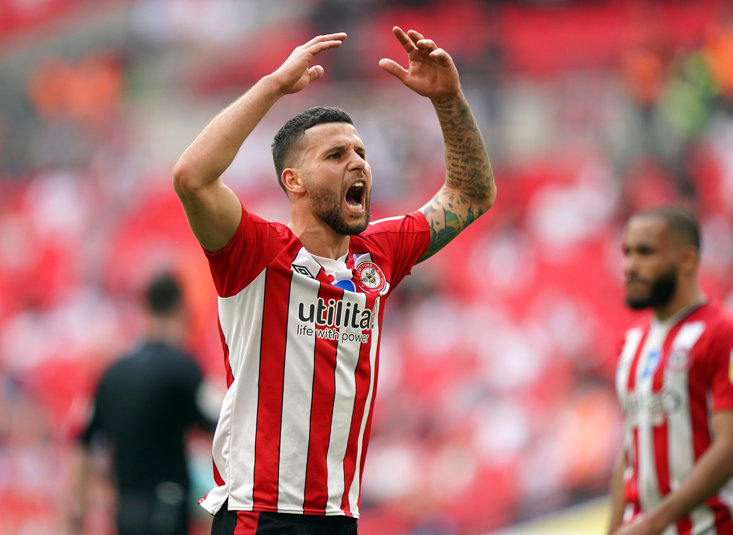 EMILIANO CELEBRATES AFTER MAKING IT 2-0

Soon after, Toney was desperately close to scoring a sensational goal worthy of any final at any level with an explosive shot from a rising ball which cleared Woodman but bounced off the underside of the bar and onto the line before springing clear. That would have been game over, but Brentford went about their work for the remaining three-quarters of the match like a side who were adamant that they would not be denied this time.

While Swansea showed a bit of life after the break, this was always Brentford’s game to lose and they were never likely to let it slip following Jay Fulton’s red card for an accidental but reckless lunge on Mathias Jensen after initially catching his opponent’s ankle.

For many Brentford supporters this felt like a final chance to have a tilt at the Premier League in the current cycle of the club. They have for many years shown an ability to build teams, challenge, sell on stars at a grand profit and quickly rebuild without too heavy a jolt. But had they missed out this time and lost the likes of Toney, Mbeumo and Emiliano that might have been one renaissance too many to overcome.

Instead, they will take their place among the elite in 2021-22. The new Brentford Community Stadium will welcome the likes of Manchester City, Chelsea, Manchester United and Liverpool, with superstar players on both sides of the pitch.

Brentford are no longer the stepping-stone club for players looking to get to the Premier League. They are there by rights, and the possibilities for an outfit with a fantastic setup, a promising manager and a well-built squad and truly endless.