Tyson Fury would tell you he doesn’t need to be on this list. That he requires no external awards, for he is the people’s champion. And he would be right. The WBC, The Ring and lineal heavyweight champion has been embraced like no other boxer of his generation. The theatrical swagger of Conor McGregor mixed with the everyman charm of Ricky Hatton. He is a genuine household name far outside the orbit of his sport. But he also happens to have had a historic 2021, and thus our ranking of the best boxers of the year would be incomplete without him.

‘The Gypsy King’ fought just once in 2021, but quality must triumph over quantity in this case. That one fight was his scintillating third battle with rival Deontay Wilder. Such was the class of their October clash, many have elevated their series above Ali-Frazier and Bowe-Holyfield in the annals of the greatest heavyweight trilogies.

The most effective measurement of the impact of Fury’s third bout with Wilder is a comparison to the backlash the fight received when it was made. Their first bout, an enthralling draw in 2018, was a solid-gold classic. But their rematch had been extremely one-sided. Fury thoroughly dominated Wilder before stopping him, and it looked like the matter would end there. ‘The Bronze Bomber’ would not relent though, and came out with an extraordinary list of excuses in the aftermath. The reasons for his loss were, according to him, as follows: his own trainer had spiked his water, the outfit he wore during his ring walk was too heavy, Fury had scratched the inside of his ears, Fury had boxed with egg-shaped weights in his gloves and the champion had put a ‘gypsy curse’ on him.

The delusions of wounded pride aside, Wilder had every right to a rematch by virtue of the fight contract. Either man could trigger a rematch regardless of what happened in their second meeting, and Wilder did just that. But after such a dominant display, Fury nor the fans were that enamoured with seeing a third fight, particularly as it scuppered the rumoured Fury vs Anthony Joshua bout that was bandied about at the time. 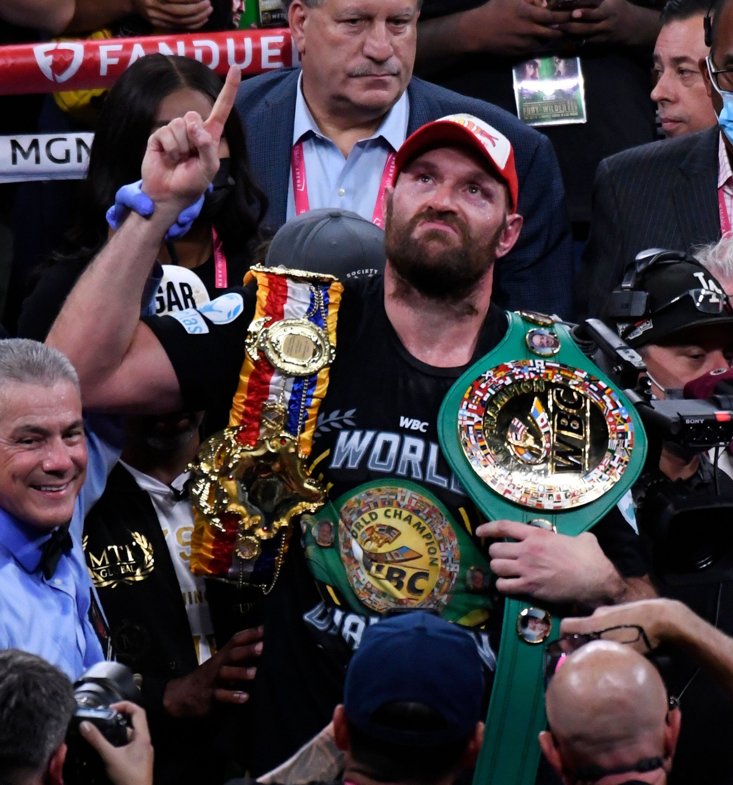 The tepid nature of the fight on-paper was forgotten when the action began. The second fight was proved to be an aberration, however doubtful the role of gypsy curses, and their trilogy fight even exceeded their spectacular 2018 meeting. The challenger hit the mat in the third round, then retaliated with two knockdowns of his own in the fourth. Fury, a fighter always at his best when up against it, fired back and would finally knock the courageous Wilder down in the tenth and then finish matters in the eleventh. The heavyweight championship of the world is the greatest prize in all of sport, and the very reason for that is due to the rigours men go through to hold it. Very few men have gone as close to oblivion as Tyson Fury did in retaining the heavyweight crown.

2021 was the year that this stretch of heavyweight history officially became the Tyson Fury era, in the same way the 60s and 70s belonged to Muhammad Ali, and the 80s was the domain of Mike Tyson. The combination of Anthony Joshua’s second loss in three years, and the career-defining Wilder triumph, has put the lineal champion front and centre of a division he first ruled in 2015. His legacy is assured, but 2022 will offer him a chance to expand upon it further.

Dillian Whyte seems Fury’s most likely next opponent, though Bob Arum has namechecked Joseph Parker and Andy Ruiz as being in the mix for that slot. What does seem certain is that, barring injury or COVID factors, Tyson will be back in the ring in March. It is what could follow that could potentially see him leapfrog a number of fighters in the all-time heavyweight list.

A blockbuster fight with the winner of Oleksandr Usyk’s rematch with Anthony Joshua is the bout boxing needs, preferably with all four heavyweight belts at stake. A win in such a match-up would see Fury transcend his already lofty status in boxing, and enter the conversation surrounding the greatest heavyweights of all time.

Boxer of the Year 4: Josh Taylor

x
Suggested Searches:
Manchester United
Liverpool
Manchester City
Marcus Rashford
Premier League
More
boxing
On This Day: Roy Jones Jr Turns On The Old Magic Against Felix...
Boxers don’t always face off when we want them to. Unlike other sports, where league systems or [ ... ]
boxing
As He Faced The Son He Cast No Shadow: Chris Eubank Jr. Must...
Chris Eubank Jr. takes on Liam Williams in the year’s first big domestic dust-up next month at [ ... ]
boxing
''I Shook Up The World!'': The Moment Cassius Clay Truly Became...
On what would have been his 80th birthday, it is only appropriate to pay tribute to the cultural icon [ ... ]
boxing
Terence Crawford Sues Top Rank, Five Boxing Stories You Might...
It’s been another busy week in the world of boxing which has seen lawsuits, new signings and some [ ... ]
boxing
Heavyweight Frazer Clarke To Make Professional Debut On Khan...
Frazer Clarke will make his professional, Sky Sports and Boxxer debut on the undercard to the highly-anticipated [ ... ]
boxing
War Of The Worlds: When Boxers And MMA Fighters Collide
Boxing and UFC’s world heavyweight champions have been exchanging fighting talk on social media [ ... ]
boxing
Brand New Heavies: There's Big Men Beyond Fury, AJ, Usyk and...
The heavyweight division is as stacked as its been at any point since the 1990s. In Tyson Fury and Oleksandr [ ... ]
boxing
World Titles And Returning Kings: 2022 Could Be A Year Of Welter...
The first big welterweight clash of the year is close to being confirmed, as WBC and IBF champion Errol [ ... ]
boxing
On The Regular: The Ridiculous History Of The WBA Regular Heavyweight...
If you’re a long-time boxing fan, you’d be forgiven for thinking the abbreviation WBA stands [ ... ]
boxing
Lawrence Okolie To Move To Heavyweight? Five Boxing Stories...
It’s been a busy first week of 2022 in the world of boxing with Lawrence Okolie looking to mount [ ... ]
boxing
Undisputed Showdown With Fury Would Be Historic Night For Boxing,...
Unified heavyweight champion Oleksandr Usyk could face Tyson Fury in a unification clash instead of [ ... ]
boxing
The Sportsman Boxing Power Rankings: January
The Sportsman Boxing Power Rankings is a monthly series ranking boxers on a number of factors to determine [ ... ]
boxing
Floyd Mayweather Lines Up Exhibition With YouTuber Money Kicks
50-0 boxing icon Floyd ‘Money’ Mayweather is set to return to the ring once again in 2022. [ ... ]
boxing
Ortiz vs Martin Can Prove Boxing Doesn't Have To Be Elite To...
Exciting sport is not solely predicated on the elite meeting the elite. While clashes of the world’s [ ... ]
boxing
Boxing's Biggest And Best Knockouts Of 2021: Featuring Fury,...
It’s been a busy half-year of boxing for me, finally getting back out on the road after the various [ ... ]
boxing
Andy Ruiz Jr Next For Tyson Fury? Five Boxing Stories You Might...
The fights may have slowed down to give everyone a Christmas break, but boxing’s powerbrokers [ ... ]
boxing
The Kings & Queens Of Promise: The Boxers To Watch In 2022
2022 already promises so much on the boxing front. Saul ‘Canelo’ Alvarez is set to move [ ... ]
boxing
Five Fights We Want In 2022: Will We Finally See Fury Vs AJ...
What a year it’s been inside the squared circle in 2021. We saw Saul ‘Canelo’ Alvarez [ ... ]
boxing
Where Are They Now? The 2005 ABA National Championship Winners
The roll call of the 2005 ABA National Championship is utterly stacked with talent. The 119th iteration [ ... ]
boxing
Her Ring Too: Women’s Boxing Set For Bumper 2022 After Thriving...
2021 was a banner year for women’s boxing. We saw thrills and spills, upsets and dominations. [ ... ]
boxing
Make Boxing Day 'Boxing' Again: The Fights To Watch This 26th...
Your internal organs are 60% turkey, your Nan made you watch the Queen’s speech and you had to [ ... ]
boxing
Move Over Die Hard, Rocky IV Is The Ultimate Underrated Festive...
“Is Die Hard a Christmas film?” It’s a debate that has raged and swirled around this [ ... ]
boxing
Jake Paul Vs Former Middleweight Champ? Five Boxing Stories...
Errol Spence will find himself in an early unification fight next year, Triad Combat is somehow returning [ ... ]
boxing
The Sportsman Boxer Of The Year - Saul 'Canelo' Alvarez
It’s been quite a year in the squared circle. Trilogies have reached their brutal conclusion, [ ... ]
boxing
The Sportsman Boxer Of The Year - Number 2: Oleksandr Usyk
It’s been quite a year in the squared circle. Trilogies have reached their brutal conclusion, [ ... ]
boxing
UFC Legends, Boxing Superstars Or His Own Brother: What’s Next...
Jake Paul moved to 5-0 (4) with a sensational sixth round stoppage of Tyron Woodley on Saturday night. [ ... ]
boxing
The Sportsman Fights Of The Year: Heavyweight Classics And Super...
Boxing fans don’t always get what they want. The heavyweight championship remains fractured, as [ ... ]
boxing
The Sportsman Boxer Of The Year - Number 4: Josh Taylor
It’s been quite a year in the squared circle. Trilogies have reached their brutal conclusion, [ ... ]
boxing
The War Is Over: Derek Chisora Does Not Owe Boxing A Single...
Derek Chisora did it again. As he was beaten, bloodied, knocked down and battered by Joseph Parker, [ ... ]
boxing
The Sportsman Boxer Of The Year - Number 5: George Kambosos...
It’s been quite a year in the squared circle. Trilogies have reached their brutal conclusion, [ ... ]