If this was a ranking to determine the biggest boxing upset of the year, this gentleman would almost certainly win. George Kambosos Jr’s incredible lightweight title win over Teofimo Lopez outranks Sandor Martin’s win over Mikey Garcia and Kiko Martinez’s incredible Hail Mary against Kid Galahad as this year’s most seismic result. While it wasn’t enough to snatch our Fighter Of The Year award, the unbeaten Australian thoroughly warrants inclusion in the top five.

‘The Emperor’ entered the ring having beaten two former world champions in his last two fights. But his victories over Wales’ Lee Selby and game American Mickey Bey had been close. Kambosos Jr clearly belonged at world level, but was seen as some way short of the absolute elite. This latter category is where everyone agreed Teofimo Lopez resided.

Takeover’ had destroyed Richard Commey in two rounds to win the IBF lightweight title, before outboxing the incredible Vasiliy Lomachenko to add the WBO, WBA and The Ring gold to his resume. The latter win had seen Lopez elevated onto pound-for-pound lists. ‘El Brooklyn’ was seen as a generational talent. If Lomachenko couldn’t beat him, who could?

Despite his unblemished record, very few would have picked George Kambosos Jr as the answer to that question. But on the night, the heavy betting underdog was unstoppable. Lopez flew out of the blocks, trying to score a first-round knockout like his life depended on it. The single-minded way he went about trying to blast ‘Ferocious’ out was almost insulting, like the champion thought he could swat him aside like an unprepared novice. Kambosos was calm under pressure, and found the punches to turn the tide of the fight. Lopez was on the canvas, and any notion of this being a routine showcase for Lopez was out of the window. 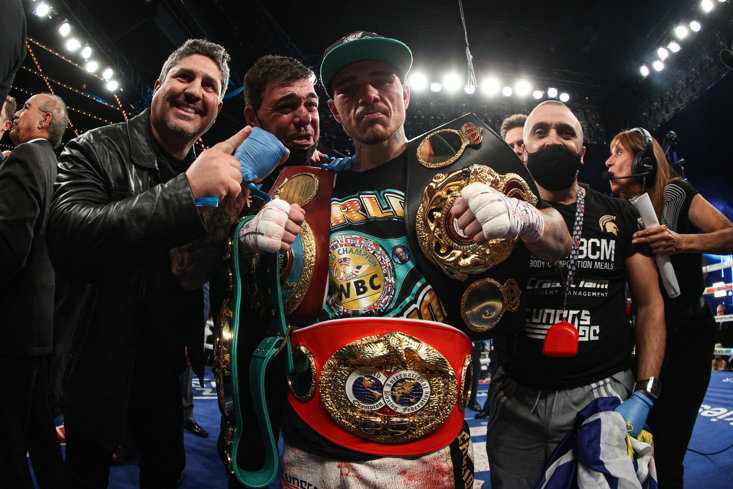 What followed was one of 2021’s finest bouts. Lopez seemed unusually wound up, with the advice of his father and trainer Teofimo Lopez Sr amounting to bizarrely primitive instructions to knock out his troublesome foe. Kambosos looked the fresher fighter, and landed the cleaner and more frequent shots as Lopez poured forward looking for the stoppage. The overhand right was the key with which Kambosos unlocked the door to history. He thudded his pet punch into Lopez’s skull all night long, opening up a lead on the judges’ scorecards.

The truly great boxing triumphs arrive through adversity, and the same was true of this magical night. Kambosos was dropped in the tenth stanza, courtesy of a crunching right hand from the champion, and from this point many thought the favourite would restore the status quo with a victory. Instead, the brave challenger bit down on his gumshield and battled back. Lopez, having seen his last hope extinguished, faded to defeat. The decision, unjustifiably split rather than unanimous, belonged to Kambosos.

George enters 2022 with the world at his feet, and we’ve covered some of the intriguing options he can choose from here. But for now George Kambosos Jr can relish his status as the unified lightweight champion of the world, and look back on the year he took the boxing world by storm.