Horse Racing
News
The Sportsman takes a look back at a busy year in the world of horse-racing
Matt Hulmes
13:00, 27 Dec 2022

Another year has flown by in the sporting world but along with it came some incredible sporting occasions and achievements, particularly in horse racing.

Here, we take a look back on some of the great contests, unfortunate turn of events and one symbolic day that brought the world to a standstill.

THE PASSING OF HER MAJESTY THE QUEEN

The most memorable moment of 2022 is also the largest and saddest. Undoubtedly the death of horse racing’s greatest supporter, Her Majesty Queen Elizabeth II in September, is a moment that will live long in the memory.

Revered all over the globe, the sport lost an owner, breeder and fan upon her passing.

Five days every June are dedicated to the Royal family at Royal Ascot, and she will be missed in the daily parade of four carriages down the mile straight.

Such great equine names as Highclere, Height Of Fashion and Dunfermline carried the famous scarlet, purple and black silks with gold braids, while a special place was reserved in Her Majesty’s heart for Estimate, who landed the 2013 Gold Cup at Royal Ascot to the cheers of a raucous, patriotic crowd. 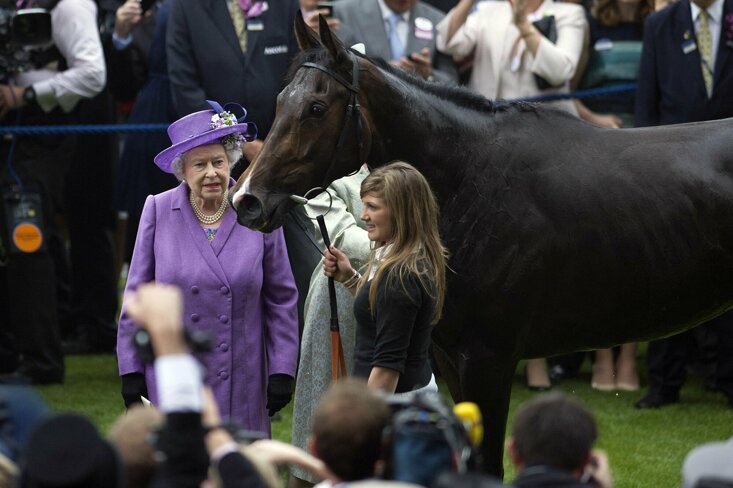 The saying “It is never over until it’s over” could have been made for the 2022 Turners Novices Chase at Cheltenham in March. It remains as the only defeat on Gallopin Des Champs’ chasing CV and one that Paul Townend will play over for all of time.

Having cantered into a fifteen-length lead approaching the last, the 5/6 favourite only needed to pop over to claim the contest and, to be fair, didn't make a mistake. Willie Mullins’ 6yo just pitched a stride after landing and gravity claimed Townend who was thrown over the horse’s head to the backdrop of deafening groans and disbelief in the packed stands, allowing Bob Ollinger, who himself had almost stopped to a walk, to stroll up the hill and claim victory. The other two Irish trained runners trailing in a distance behind.

Gallopin Des Champs made amends at Fairyhouse the following month and has won his other four races over fences by an aggregate of 62 lengths and heads into 2023 as the Gold Cup favourite.

As stories develop over the years, the next generation will hear how everyone who descended upon Epsom Downs on the first Saturday in June in 2022 had an ante post ticket for Desert Crown to win the Derby at prices ranging from 6/1 to 50/1.

The very few who didn’t decided they did not want to miss out on the fun and backed the favourite on the day as a wave of support saw him jump off a well backed 5/2 on the back of his Dante win the previous month at York. It was a tried and tested method of Sir Michael Stoute, with three of his previous five Derby winners taking that route from the Knavesmire.

Here was a 76-year-old trainer whose CV was exemplary. 16 classic successes, Champion trainer on 10 occasions and worldwide success in the Breeders Cup, Japan Cup and Dubai World Cup to name but a few.

Stoute trained his first Derby winner in 1981, the famed Shergar, and here he was again, 41 years on with another talented 3yo on his hands after a quiet spell among the game’s elite.

The pressure was on Richard Kingscote too on just his second Derby ride, but you’d have been forgiven if you thought he’d ridden in one every day of his career. Horse and jockey were perfectly positioned throughout, and once the accelerator button was pressed just over two furlongs out, the result was decided in a matter of strides.

Sadly, we haven’t seen him since as he was one of the most visually impressive Derby winners this century. However, it was proof and a timely reminder, not that we needed it, that Sir Michael Stoute was still a trainer for the big occasions. 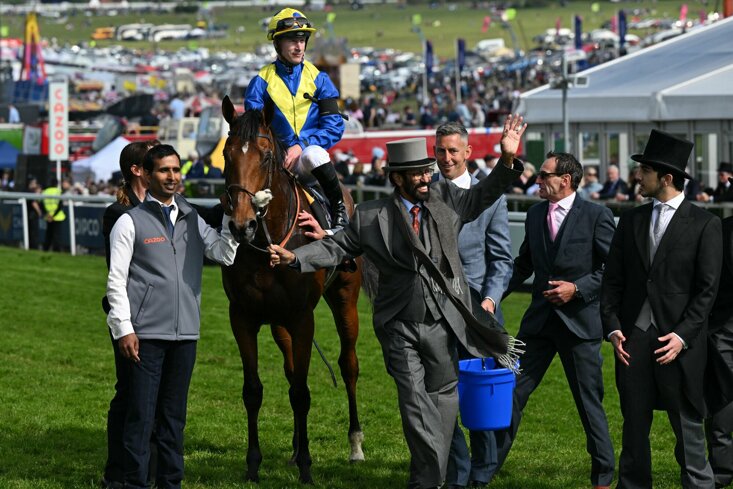 A PLUS PERFORMANCE AS BLACKMORE STRIKES GOLD

The famous sporting amphitheatre at Prestbury Park, Cheltenham is reserved for historic occasions, and we were treated to another in 2022 as Rachel Blackmore became the first female rider to land Gold Cup aboard A Plus Tard.

Twelve months earlier, she had been denied that history when settling for second behind stable companion Minella Indo.

That, however, was behind closed doors so it was perhaps for the best that an appreciative crowd in the Cotswolds could celebrate this achievement with her, and it was achieved in style with a runaway fifteen length success.

In bolting away with the blue riband, Blackmore added the Gold Cup to her Champion Hurdle and Grand National victories from 2021 (she actually won the Champion Hurdle again in 2022 for good measure aboard Honeysuckle) to crown an incredible twelve-month period.

A Plus Tard was just the second horse along with Kauto Star to win a Gold Cup having been beaten in a previous version. The pair were joyously welcomed into a packed winners’ circle as punters packed around the parade ring to welcome back the well supported 3/1 favourite. 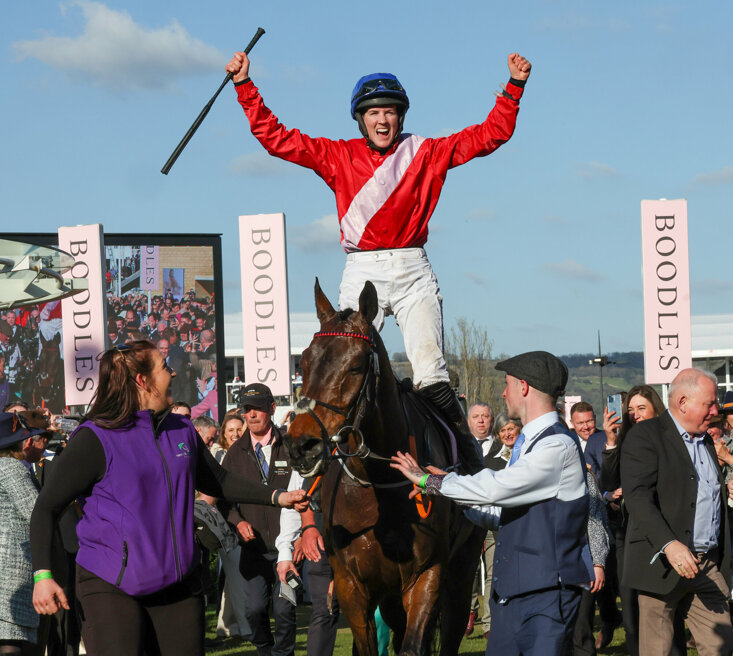 It usually takes a long time to witness equine greatness on a scale of the incredible Frankel, who graced our racecourses a decade ago, but this generation have been very lucky as another great entered the fray.

Baaeed only appeared on our racecourses last June and came into this season unbeaten in six races, including a brace of Group 1s.

Frankel retired unbeaten in fourteen starts and Baaeed was looking to emulate his four-year-old career with the same path of top flight victories.

Starting at Newbury in the Lockinge, the opposition were brushed aside before routine victories at Royal Ascot and Glorious Goodwood followed.

The next big test was to come at York in the Juddmonte International, upped to ten furlongs for the first time, a race where Frankel flew past other stars of the sport to put himself on a pedestal rarely seen before. It wasn’t as deep a field that Frankel faced a decade earlier, but Baaeed sauntered to a six-length success over globetrotting money spinner Mishriff.

Comparisons were ultimately drawn up about the two equine behemoths but official ratings had Frankel as a 5lb better horse while Timeform’s gap was slightly larger.

Sadly, Baaeed couldn’t conquer the Champion Stakes at Ascot in October when trailing in only fourth to end hopes of an unbeaten career, but it was still an incredible campaign from William Haggas’ 4yo and who would have thought that in 2022 we would have got so close to witnessing an achievement that we thought was impossible in emulating the fantastic Frankel just a decade down the line. 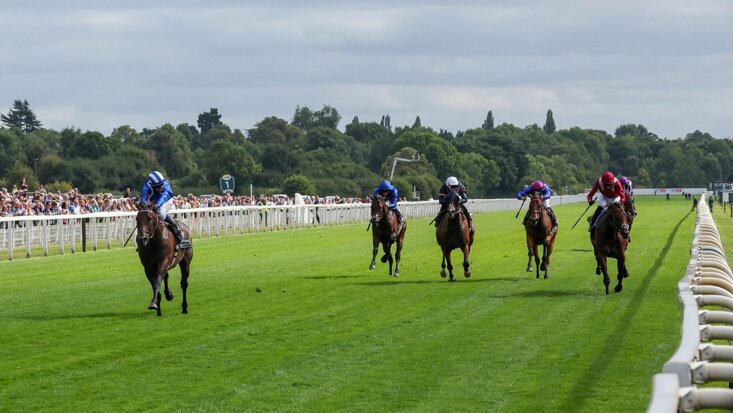 Many other memories just missed out on making the top five…

Charlie Appleby had a sensational year at home and abroad. From his 478 runners that he sent out from Moulton Paddocks, 152 of them returned victorious amassing over £6m in prize money that included a classic 1-2 at Newmarket in the 2000 Guineas as well as the French and Irish version of that contest plus Royal Ascot success and six Grade 1 victories stateside.

December saw two stalwarts of the weighing room announce their retirement. Davy Russell exited stage left immediately after listed success at Thurles, while Frankie Dettori announced a roadshow in 2023 in what will be his final season in the saddle, culminating in Champions Day in England and a final swansong in the Breeders’ Cup in November.

Two horses and jockeys were run into by a van in France when heading to the start. The horses had emerged from behind a tree with the driver unaware. Thankfully all horses and riders were unscathed in what could have been a very unsavoury incident but will go into the ‘bizarre’ category of incidents.

Plus many, many, more. 2022 was the first full year of fans back on a racetrack since the pandemic and attendances have not quite climbed back to pre-covid levels. The sport is facing some tough times ahead, but we hope that 2023 can deliver on the track once again, just as the past twelve months has done.