Football
News
After a trophy-laden career, the legendary Carli Lloyd has announced that she will retire at the end of 2021
Joey Mills
14:32, 17 Aug 2021

U.S. Women’s Soccer legend Carli Lloyd has announced that she will retire at the end of 2021. The 39-year-old has enjoyed a historic career that has seen her lift two World Cups, claim two Olympic Gold Medals and score 128 goals in 312 appearances for the national side.

A fixture in U.S. club football throughout her career, Lloyd spent only a brief spell in Europe. The versatile Lloyd joined Manchester City on loan in 2017, leaving a lasting impression and lifting silverware during her 10-game flying visit to the Academy Stadium.

The two-time FIFA Player Of The Year received numerous offers for her services before jetting to Manchester, and the side she joined were in rude health. The reigning Women’s Super League Champions, manager Nick Cushing’s side brought the American standout on board for the WSL Spring Series, FA Cup and Champions League knockout stages.

Lloyd has since spoken of how “the stars aligned” when her move to City became a reality, telling reporters upon her return to the States, “I’ve always wanted to go overseas to play but it had to be the right fit.” It soon became clear that the union of Lloyd and the Lady Citizens was exactly that.

The on-loan Houston Dash star debuted in a 1-0 FA Cup fifth round win over Reading. A promising start, Lloyd had a goal chalked off for offside, and set up Georgia Stanway for a chance that was well-saved. The attacking midfielder would get off the mark in her next outing, a Champions League quarter final first leg tie with Fortuna Hjorring. Lloyd confidently nodded a Jane Ross ball past goalkeeper Maria Christensen to score the only goal of the game. 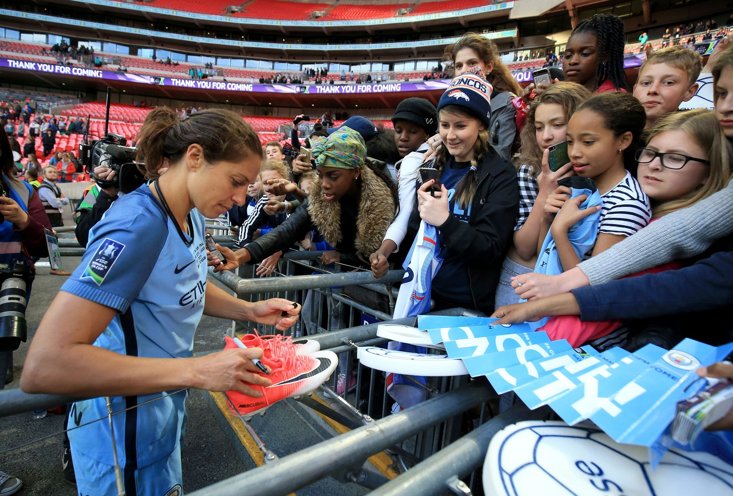 City would continue to challenge on all fronts in Carli’s next game, a 2-1 away victory over Bristol City to reach the FA Cup semi final. Lloyd, who once scored a 16-minute hat-trick in the 2015 World Cup final, would have to settle for forcing a wonderful Caitlin Leach save as her side progressed. Lloyd helped Cushing’s side notch another 1-0 win over Hjorring in their second leg contest, before seeing a fine solo run denied a goal in another 1-0 win, this time over Liverpool Ladies in the FA Cup semi final.

After a roaring start to life in England, helping her side to successful runs in the FA Cup and Champions League, Lloyd would finally taste defeat when Lyon defeated City 3-1 in Europe. Intriguingly, Lyon fielded another U.S. Soccer superstar on a European sojourn. Alex Morgan lined up against her national teammate that day, and got the better of the exchange. Lloyd would gain a measure of revenge, netting the winner in the second leg, but the 1-0 scoreline was not enough for City to progress.

The adaptable midfielder found herself deployed in a deeper role for the Spring Series visit of Birmingham City, and her side could only draw 1-1. The Lady Citizens rebounded with a fine 3-2 win over Reading, With a Wembley trip on the horizon, Lloyd would be rested for a 3-0 away win at Bristol City, where Lucy Bronze netted a hat-trick.

The crowning glory of Carli Lloyd’s time at Manchester City, the current Gotham FC star netted her side’s third goal in a 4-1 FA Cup final rout over Birmingham City. Having spent most of her time in England as a midfielder, Lloyd led the line as City dazzled in the Wembley showpiece. It is an afternoon the player remembers fondly. “It’s something I’ll cherish forever.”, she told City’s We’re Not Really There show, “It’s every player’s dream to play in an iconic stadium like Wembley.” 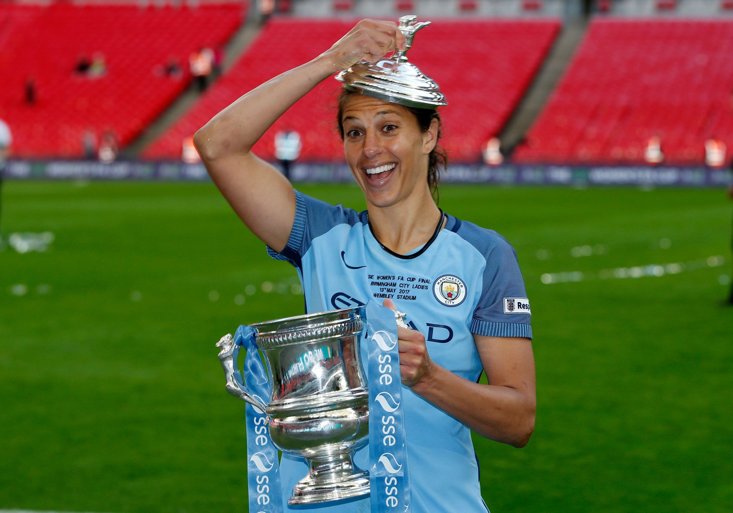 Lloyd’s final appearance in blue is one she would perhaps rather forget. Despite her team running out 5-1 winners over Yeovil, she was sent off for throwing an elbow late in the game. The resulting three-match ban would stretch for the remainder of her loan spell, as City agonisingly finished the Spring Series second on goal difference to winners Chelsea.

Despite coming to a premature end, Lloyd’s time at Manchester City was a success. Goals, quality performances and silverware followed the illustrious U.S. great to Manchester, and she is fondly remembered by coaches, teammates and fans at the club. For Lloyd, her whistle-stop tour of English football will stick in her memory for an additional reason. “I can look back in 10, 15 years' time and say that I lived in the same apartment as Pep Guardiola, and exchanged texts with him.”

The U.S. Women’s side may never replace the influence and goalscoring acumen of Carli Lloyd, and her performances between now and her final bow will be cherished by fans countrywide. Perhaps, even a few wistful Mancunians will tune in to watch a legendary footballer who was once, albeit briefly, one of their own.