Cycling
News
The 23-year-old is the favourite to be presented with the yellow jersey on the Champs Elysée on July 24
Kris Voakes
13:05, 30 Jun 2022

We’re about to find out whether we’re living in the era of a Tadej Pogacar monopoly. The Slovenian heads into the 2022 Tour de France, which starts in Copenhagen on Friday, as the two-time defending champion. And while a handful of riders have won the general classification in three straight years before, Pogacar would become easily the youngest to achieve such a feat.

The 23-year-old is the favourite to be presented with the yellow jersey on the Champs Elysée on July 24, and there is a lack of outstanding candidates to challenge the UAE Team Emirates star consistently enough over the 21-stage contest to prevent him from landing a hat-trick of titles.

Britain’s Geraint Thomas might have won the Tour de Suisse in June, but the eight-day, 1300-kilometre course offered only an appetiser of what lies ahead in the 3328 km trip around Denmark and France over the next three weeks.

The 2020 and 2021 runners-up Primoz Roglic and Jonas Vingegaard will lead Team Jumbo-Visma’s assault on Pogacar’s crown, but in truth the biggest hope the rest of the field have is that the reigning champion is ruled out of the race completely after UAE Team Emirates were hit on Thursday by the news that team boss Merijn Zeeman and rider Matteo Trentin had both tested positive for Covid-19.

While Trentin has been withdrawn from the race as a result, Zeeman will work remotely to begin the tour. However, all eyes are now on Pogacar’s health status ahead of the opening time-trial around the streets of Copenhagen on Friday. The feeling is that so long as he makes it to the start line, he will take some beating. 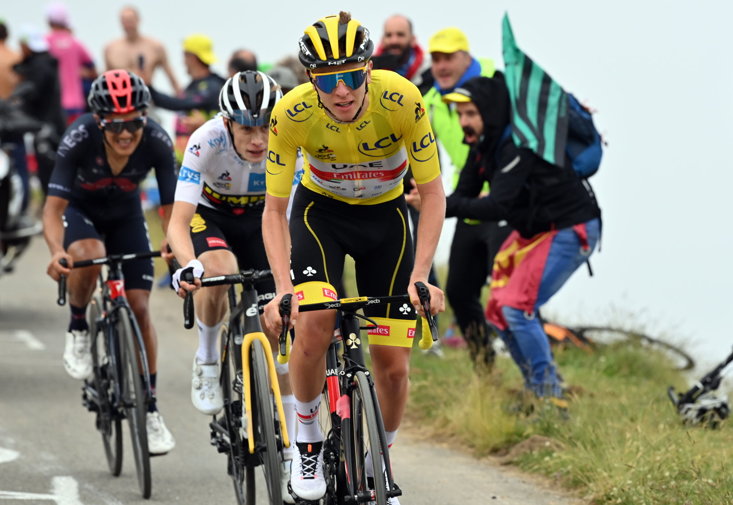 There was an expectation that history would be made elsewhere in the 2022 Tour after Mark Cavendish equalled Eddy Merckx’s all-time record for stage wins in last year’s edition. But having been beaten to the line by Wout van Aert on the Champs Elysée in the final stage of 2021 after being boxed in on the final straight, Cavendish has been left out of the Quick-Step Alpha Vinyl Team lineup for this year’s event despite having only this week earned his second British National Road Race Championship.

The 34-time stage winner will have to sit and watch as a reserve instead of aiming for a record 35th victory after Quick-Step chief Patrick Lefevere picked Fabio Jakobsen to be his team’s lead sprinter. With Julian Alaphilippe having also been omitted, Quick-Step don’t have a single former Tour de France stage winner among their eight-rider lineup.

After Friday’s time-trial opening stage, the teams will head to Roskilde for Saturday’s 202.2km ride to Nyborg before the Danish leg of the tour ends between Vejle and Sonderborg on Sunday. The race then resumes in Dunkirk on Tuesday, with the first mountain stage taking place between Tomblaine and La Planche des Belles Filles on July 8.