Teofimo Lopez returns to the ring on Saturday to continue on the comeback trail towards world titles. In theory, a victory over Sandor Martin would put him in line for a title shot. Their super lightweight 12-rounder is a WBC final eliminator, meaning the winner will become mandatory challenger to world champion Regis Prograis. But ‘The Takeover’ can’t afford to look past his upcoming foe, as he faces his toughest test since George Kambosos Jr scored a huge upset over him last year.

Lopez rebounded from that split-decision defeat, in which he lost his unified lightweight championship, by moving up to 140lbs. In his first outing at the new weight, the 25-year-old inflicted the first defeat on unbeaten but untested Pedro Campa. The seventh-round TKO victory didn’t tell us much we didn’t already know.

Lopez was his usual precise, occasionally spiteful self in breaking down Campa. But the main purpose of the bout was restorative. A relatively straightforward path to a new weight and back into the win column after a surprise defeat. The Campa bout served its purpose. A sort of boxing mouthwash to remove the sour taste of the Kambosos reverse. But now it’s time for tougher tests.

In Sandor Martin, Lopez has got just that awaiting him in Las Vegas on Saturday. ‘Arrasandor’ is a fighter well-versed in the art of the upset. The Spanish southpaw catapulted to international consciousness with a stunning majority decision upset over the great Mikey Garcia last year. Martin fortified his world ranking in April, when he scored a unanimous decision win over Jose Felix in Barcelona. Peaking at the right time, Martin is a live opponent for the comebacking Lopez.

It would still be an almighty shock if Martin pulled off the victory. But the key factor in this fight is the fact he will not be daunted. Having seen off four-weight world champion Garcia, it is clear he does not wilt on the big stage. Having seen Lopez well-beaten by Kambosos, the Spanish star will believe he can do the same. 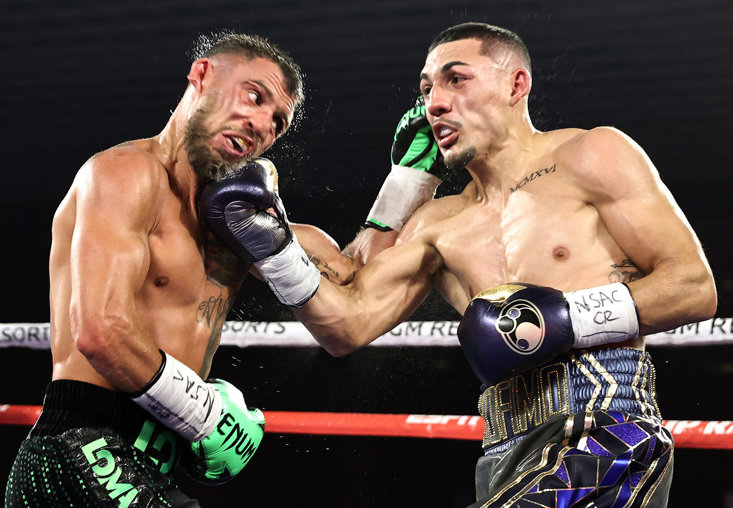 For Lopez, this is a critical point in his journey. Lose and there is likely no way back to his former standing as a pound-for-pounder in the sport. After beating Vasiliy Lomachenko to unify the 135lb championship, Lopez looked like the new face of pugilism. Aged 23 at the time of that triumph, the Brooklyn-born boxer was set up for a long reign atop the boxing tree. But Kambosos had other ideas. Another defeat would surely extinguish hopes of mainstream megastardom for good.

A win would almost fully restore Lopez to his former track. The table would be set for a showdown with WBC super lightweight champion Regis Prograis. That would be a huge fight on the 2023 boxing calendar. Win that and the options are endless. The most exciting is a unification fight with the winner of Josh Taylor’s rematch against Jack Catterall.

‘The Tartan Tornado’ is effectively the true champion at 140lbs. The Scotsman was the undisputed king and has only had his titles stripped due to sanctioning body nonsense. The WBO and The Ring titles Taylor and Catterall will reportedly fight for in the first quarter of 2023 can be considered the genuine world championship at the weight. Therefore it makes sense that the winner of that bout will end up in Lopez’s crosshairs. ‘The Takeover’ has already expressed an interest in travelling to the UK for such a fight, which shows a willingness and bravery too many top fighters seem to lack these days.

But that will all have to wait. Sandor Martin is the first order of business for the former lightweight king. He is a fighter who presents a rich and rewarding challenge. A fighter coming to win, intent on scuppering the Lopez revival. Win this and untold glory awaits. Lose and the road back may be too long to traverse.