Tennis
News
Here are some of the best hopefuls at Wimbledon qualifying this week who could go under the radar
Conor Keane
12:03, 23 Jun 2021

As the Wimbledon qualifiers get underway today there will be some unfamiliar faces who will be looking to make a name for themselves at the All England Club this summer. Here is a look at some of the best hopefuls to keep an eye on in 2021.

No. 7 seed Arthur Rinderknech’s game is built for the grass. Despite playing only four matches on the surface in his career so far, it is hard to take him off of this list when you see the way he plays: Rinderknech has a huge first serve, flat, cutting groundstrokes, and he judges situations well when he needs to come to the net. He has all the attributes to be a success at SW19 this summer. 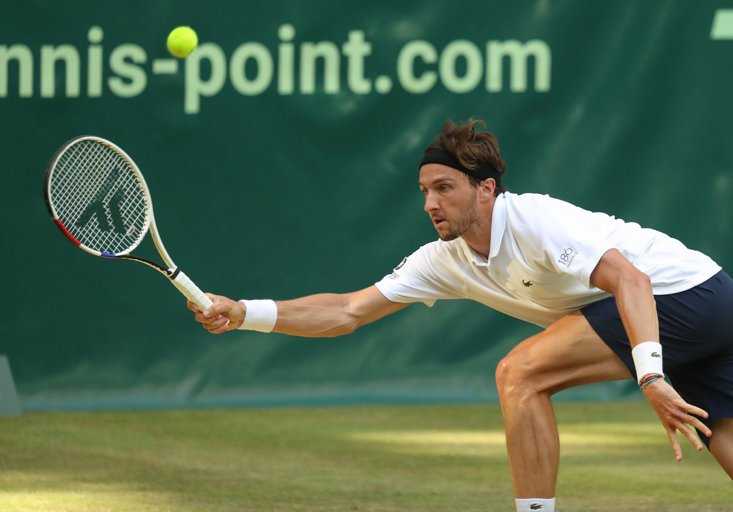 In his first grass-court tournament ever in Halle last week, the Frenchman came through qualifying and also won a round in the main draw. This included a significant, straight-sets victory over famous grass courter Sergiy Stakhovsky. With an asset such as his first serve and an overall game that suits the grass well, Rinderknech should have no issues navigating his Wimbledon qualifying draw.

No. 6 seed Denis Kudla is an excellent player on grass. With a 67-42 career record (61% winning percentage), he has a wealth of experience on this surface and will be looking to take his impressive form on the green stuff into the Wimbledon qualifiers.

Kudla won the Ilkley Challenger title in 2015 over another solid grass courter in Matthew Ebden. He’s made two other grass-court Challenger finals, including a couple weeks ago during the Nottingham Challenger and although he lost to fellow American Frances Tiafoe in that final, he had impressive wins over Dan Evans and Kamil Majchrzak during his run to the championship match. 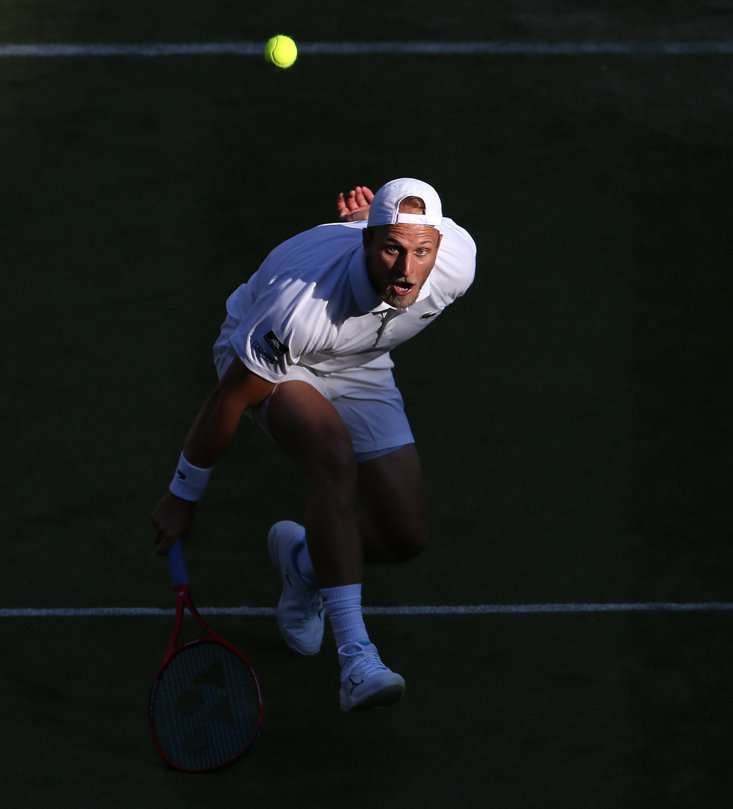 Kudla had an eye-catching win over Alexander Zverev in the second round and even took Marin Cilic to four sets in the round of 16. Looking at Kudla’s game, he has compact, flatter groundstrokes, his shots cut through the court and he is able to deflect back cruel serves and powerful shots from the baseline. He also has the ability to prolong points on grass that many other players do not have, which gives him a distinct advantage.

In only her second WTA main-draw appearance in Strasbourg last month, German Jule Niemeier made a surprise run to the semi-finals, as a qualifier, beating the likes of Andrea Petkovic and Shelby Rogers before falling to Roland-Garros champion Barbora Krejcikova in three close sets.

The 21-year-old drew more attention on home soil last week at the WTA event in Berlin, where she qualified for the main draw before narrowly losing 7-5 in the third round to world No.12 Belinda Bencic. A skilled shot-maker with a lot of potential, the world No.168 Niemeier is making her Grand Slam qualifying debut this week in Roehampton.

China's former junior No.1 is looking to qualify for her first Wimbledon main draw this week at the Bank of England Sports Centre. The 20-year-old left-hander had a stellar junior career, winning the US Open girls’ singles and the Wimbledon girls’ doubles, the latter alongside her compatriot Wang Xinyu. 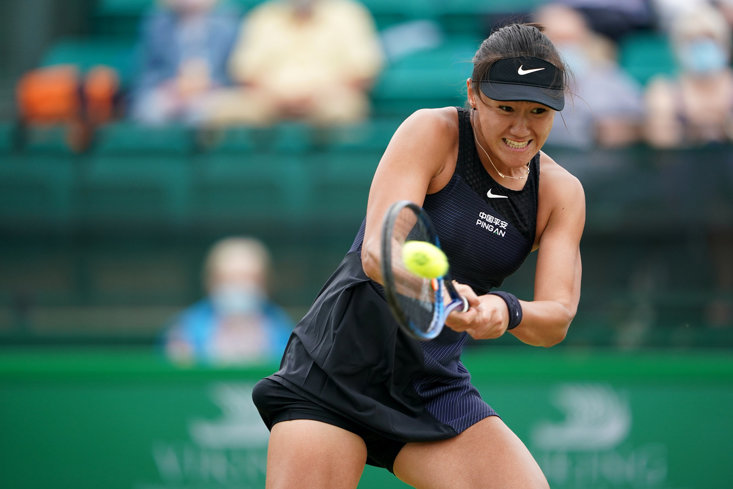 Fresh from a strong campaign at Roland-Garros, where she qualified before stretching 2020 quarter-finalist Danielle Collins to three sets in the first round, the world No.137 Wang has enjoyed a smooth transition from clay to grass. She also reached the last 32 in the WTA 250 tournament in Nottingham, then rose to the quarter-finals at the W100 ITF there a week later.

x
Suggested Searches:
The Sportsman
Manchester United
Liverpool
Manchester City
Premier League
More
tennis
“I Can Beat Anyone” - Kyrgios Feeling Confident Ahead Of Wimbledon...
A bullish Nick Kyrgios reckons he can beat absolutely anyone in the Wimbledon draw on his day and hopes [ ... ]
tennis
Coco Gauff: Teenage Tennis Star And Already Spokeswoman For...
As if being one of the best young tennis players in the world striving to win tournaments and establish [ ... ]
tennis
Djokovic Has Reservations Over “Fairness” Of Russian And Belarusian...
Novak Djokovic admits he still has reservations about what he called the ‘fairness’ of Wimbledon [ ... ]
tennis
Andy Murray's Snubbed Saudi Millions Before And Refuses To Play...
In the wake of the new £200million LIV Saudi Arabia-backed Series emerging in golf, the two-time [ ... ]
tennis
Serena Williams Feels Like A 'Part-Time' Tennis Player Ahead...
Serena Williams may be the greatest of all time – but the winner of 23 grand slam singles [ ... ]
tennis
''I've Learnt I'm Resilient'' Emma Raducanu Is Ready For Wimbledon...
Emma Raducanu believes that the setbacks and hurdles she has had to face since sensationally winning [ ... ]
tennis
Rafa Nadal On Injury Battles And Missing Roger Federer At Wimbledon...
Tennis legend Rafa Nadal insists that he has never let any of his many career injuries distract him [ ... ]
tennis
The 15 Greatest Players To Play On Wimbledon's Centre Court
As The Sportsman builds and improves its sports coverage across the board, we will be on site at Wimbledon [ ... ]
tennis
Petra Kvitova Warming Up Nicely For Another Wimbledon Title...
Whisper it quietly…but at 32 Petra Kvitova looks to be heading to Wimbledon with her best chance [ ... ]
tennis
Jo Konta Backs Emma Raducanu To Cope With Intense Spotlight
Former British No1 Jo Konta has backed teenager Emma Raducanu to cope with the ever more fierce spotlight [ ... ]
tennis
Wimbledon 2022 Draw: Andy Murray Begins Campaign Against World...
Andy Murray will open up his bid for a third Wimbledon singles title on Monday against the world No70 [ ... ]
tennis
The Wimbledon Miracle: When 250-1 Wildcard Goran Ivanisevic...
When Goran Ivanisevic brought the Centre Court house down on ‘People’s Monday’ in [ ... ]
tennis
Serena Williams' Winning Return Raises Hopes Of Wimbledon Wildcard...
Almost exactly a year after departing the Centre Court at Wimbledon in agony and tears after withdrawing [ ... ]
tennis
Boulter Downs Wimbledon Finalist Pliskova For First Career Win...
It was just about as Serena Williams was hitting up with new doubles opponent Ons Jabeur on an outside [ ... ]
tennis
Wimbledon Centre Court: How Can I Get Tickets And What’s The...
When it comes to the summer spectacle that is the Wimbledon Championships, most tickets are like gold [ ... ]
tennis
Andy Murray Still An Inspiration, Says British No1 Cameron Norrie...
Andy Murray remains a huge inspiration to the rest of the British tennis pack according to current UK [ ... ]
tennis
Ons Jabeur: They're All Jealous Of Me Playing Doubles With Serena...
As Serena Williams rocks up in sunny, sleepy Eastbourne this week, arguably the sport’s greatest [ ... ]
tennis
Why Berrettini Is Heading To Wimbledon Better Prepared To Become...
History looks set to be repeating itself this summer as Matteo Berrettini has retained his Queen’s [ ... ]
tennis
Who Is Casper Ruud? Wimbledon's Number Three Seed Who Says ''Grass...
23-year-old Casper Ruud, for some, has lived up to his name ahead of Wimbledon. The number three seed, [ ... ]
tennis
Everything You Need To Know Ahead Of The Queen's Club Championship...
The grass court season is well underway and while we find ourselves counting down the days until Wimbledon [ ... ]
tennis
Should Nick Kyrgios Give Ronnie O’Sullivan’s Saviour Steve Peters...
Is it too late for Nick Kyrgios to be remembered by tennis as anything other than a petulant and obnoxious [ ... ]
tennis
Andy Murray's Wimbledon Hopes In Doubt After Hip Injury Flares...
It was meant to be the first real high since his injury crisis. Instead, at the Stuttgart Open final, [ ... ]
tennis
Mixed Doubles Partnership With Murray Could Be Just What Raducanu...
Emma Raducanu’s participation in this year’s Wimbledon Championships are in doubt after [ ... ]
tennis
Rafael Nadal And The Sport Stars That Achieved Victory In Spite...
Rafael Nadal has done it again. The King of Clay has collected his 14th major title at Roland Garros [ ... ]
tennis
King Of Clay Is Here To Stay: Rafael Nadal Beats Casper Ruud...
The teacher defeated the student, as the most prolific French Open winner of all-time clinched another [ ... ]
tennis
Untouchable Iga Swiatek Dominates Coco Gauff To Win Second French...
21-year-old Iga Swiatek is now a two-time French Open champion after an imperious 6-1,6-3 win over American [ ... ]
tennis
'Watford-esque' Raducanu Needs To Find Stability To Become A...
John Lloyd has urged new British tennis star Emma Raducanu to avoid the pitfalls he experienced [ ... ]
tennis
British Star Cameron Norrie Wins First ATP Title On Clay Ahead...
Cameron Norrie saw his preparations for the French Open come together perfectly by winning his [ ... ]
tennis
Wimbledon Faces Major Dilemma As WTA And ATP Withdraw Rankings...
Unless there are further seismic developments in the weeks to come, this year’s Wimbledon Championships [ ... ]
tennis
End Of An Era For British Women's Tennis As Robson Joins Konta...
As they say, nothing lasts forever, and in sport careers come and go in the blink of an eye. On Monday, [ ... ]