The FIFA World Rankings is always something to keep an eye on. The footballing governing body marks nations based on performance, with points awarded for winning certain games, with points subtracted for losses in key matches, such as qualification for tournaments and competitions.

Belgium - achieving third place in the 2018 World Cup - currently top the rankings system which is organised by a specific algorithm.

Second place in the table is France, followed by Brazil. England enter at number four, with their World Cup vanquishers Croatia slightly behind in third. Croatia - managed by Zlatko Dalić - achieved their best ever finish at the World Cup in the last tournament, finishing runners-up to Les Bleus.

Uruguay, Portugal, Switzerland (who both reached the UEFA Nations League finals), Spain, and Denmark complete the top 10. After their disastrous performance in Russia, Germany have slipped all the way down to 13th.

With a host of friendlies currently underway, The Sportsman - with data from Transfermarkt -  has worked out the cumulative value of each team in the top 10, based on recent squad call-ups.

It’s no surprise that world champions France have the greatest transfer value, mainly thanks to the second most expensive player of all time, the blistering Kylian Mbappe. The forward was purchased by Paris Saint-Germain in a sensational deal worth a minimum £116m before additional clauses and bonuses, from Ligue 1 rivals. Transfermarkt places his value at £180million, making the 20-year-old the most expensive player to feature in any of the top 10.

Compatriot Antoine Griezmann also commands a fair prize, at £135m. In total, Les Bleus are valued at an eye-watering £1.1billion from their most recent 23 players called into international action. It’s no surprise that Didier Deschamps’ side have the priciest attackers, at £490.5million; alone that’s more than the entire Croatia, Uruguay, Switzerland, and Denmark teams. 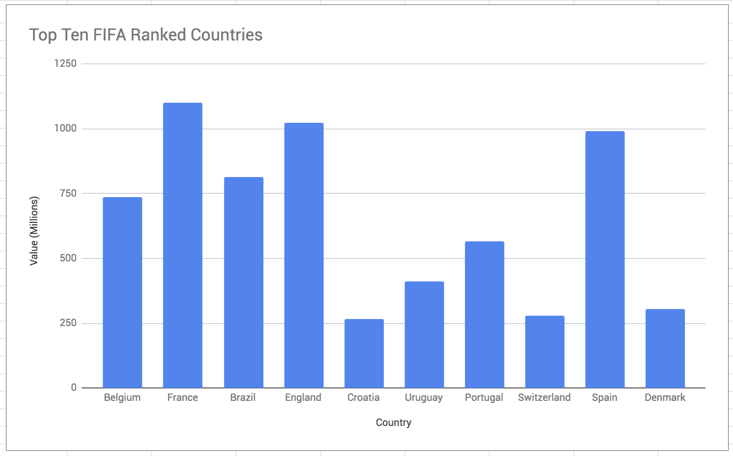 Next up is England, who are worth a combined £1.02billion, the most expensive player being captain Harry Kane, of Tottenham Hotspur, who’s valued at a massive Griezmann-esque price of £135m. They squeeze just ahead of Spain, who are just under the billion-mark.

The Three Lions - recently awarded bronze place in the inaugural UEFA Nations League finals - stand a good £200m ahead of Brazil. The five-time world champions currently have a total squad value of £812.25m, though would only marginally be behind if it weren’t for a particular reason. Starman Neymar is excluded after he was ruled out of the 2019 Copa America with an ankle injury. The Brazilian was bought by PSG for £198m in 2017 from Barcelona, making him the world’s most expensive player. Transfermarkt currently place him at £199.8m, meaning he’s a massive loss to the Canarinho in this stat comparison.

World Number One Belgium - currently with Roberto Martinez at the helm - are recorded at a relatively paltry £735.3m, placing them fifth for value but still stake a claim to being one of the goliaths.

The least valuable team is Croatia, who despite the inclusion of Ballon d'Or winner Luka Modric, post a total team value of ”only” £266.19m. 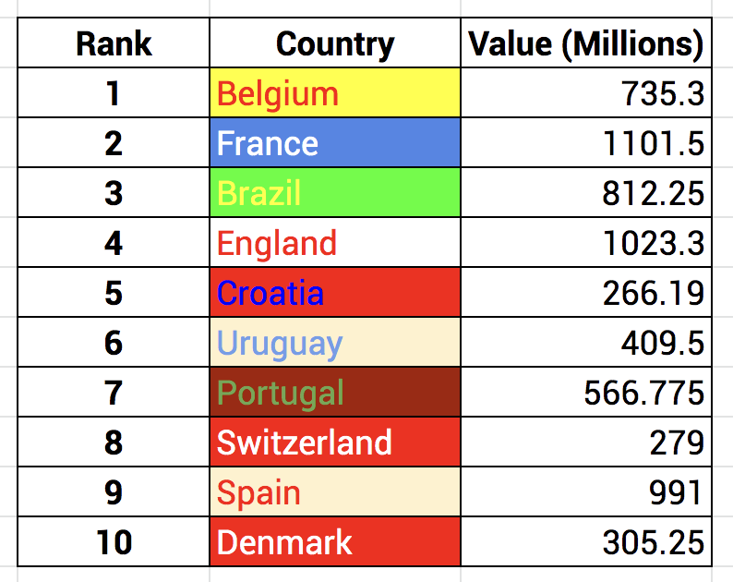