The most controversial topic in sport right now, the LIV Golf tournament, teed off on Thursday after months of contentious build-up. The names have been drawn, the behind-closed-doors draft was completed on Wednesday and we’re underway in the Centurion Club, London for what is sure to be a wild ride for all involved.

For the uninitiated, it’s important to run through the events that led up to this week, starting back in October 2021. On October 29th, Australian golfing legend Greg Norman was named Commissioner and CEO of LIV Golf Investments with the tour to be backed by Saudi Arabia’s Public Investment Fund, the same investment group responsible for the purchase of Newcastle United chaired by Crown Prince of Saudi Arabia, Mohammad bin Salman. There was a period of hiring after this, which remained relatively quiet until the new year.

In February, author Alan Shipnuck reported that LIV Golf was to formally announce the arrival of the new tour on the week of the PGA Tour’s headlining event, The Players, in early March. This was followed by Shipnuck releasing quotes from Phil Mickelson from an upcoming book he was writing, where ‘Lefty’ admitted that LIV was “nothing more than what he called ‘sportwashing’ by a brutally repressive regime.” and described the Saudis as “scary motherf***ers to get involved with.”

Outroar followed and by the time the Genesis Invitational rolled around on February 21st, many of the PGA Tour’s top players came out to declare their allegiance to their home tour. Bryson DeChambeau, Dustin Johnson and Tiger Woods were among those to comment, and Rory McIlroy was quoted for numerous years slating any ideas of a breakaway tour and continued in fine form, describing it as “dead in the water.”

“I certainly don’t think the field is anything to jump up and down about,” the Northern Irishman claimed. “Look at the field in Canada [ahead of PGA Tour Canadian Open]. They are proper golf tournaments.” 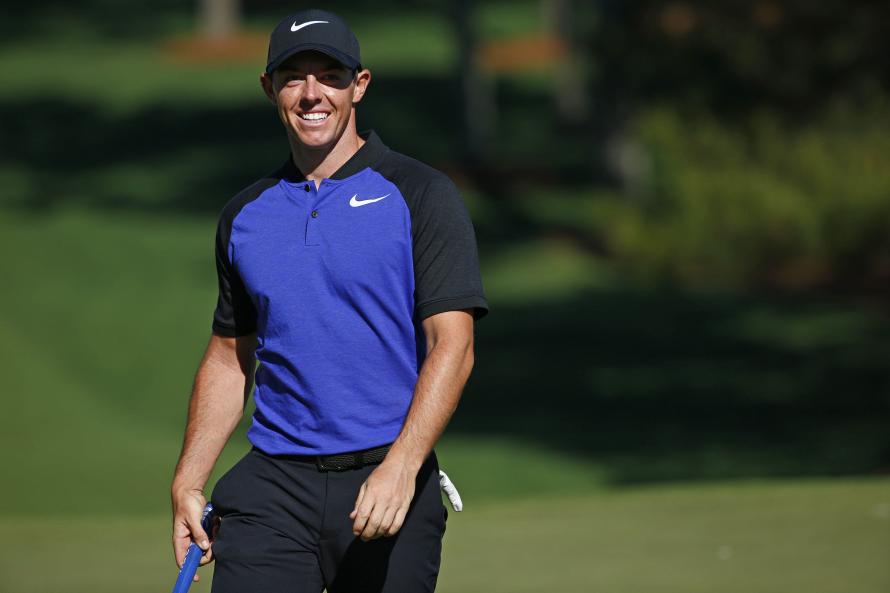 The official list of destinations, in order is: Centurion Club in London, Pumpkin Ridge in Portland, Trump National in Bedminster, The International in Boston, Rich Harvest Farms in Chicago, a new private course named Stonehill in Thailand, Royal Greens Golf & Country Club in Saudi Arabia before the season finale at Trump Doral in Miami.

April kickstarted the player movement into the tour. On the 19th, world number 1130 Robert Garrigus became the first member of the PGA Tour to make a formal request for a waiver to play in the inaugural event in London. A week following, Phil Mickelson filed for a release from the Tour to be able to play in the LIV Events, breaking his two-month hiatus from golf in the process.

The following day, LIV Golf set the ticket prices for their events, with a three-day pass costing $225 or $85 for individual tickets. This might not seem important in the grand scheme of things, however when more players were added, their code to grant free tickets to their most dedicated fans remarkably missed the mark with the tickets still being available over 24 hours later for free.

On May 11th, the PGA Tour denied the public and private requests from its players that wanted to take part in the LIV Golf Invitational. On the same day, Greg Norman fumbled a question, describing the murder of The Washington Post’s Jamal Khashoggi as “a mistake” which led to further outrage, with Amnesty International describing his comments as “seriously misguided.”

Norman’s work as an iconic ex-golfer that figureheads the project was beginning to create issues, despite securing an extra $2bn increase in funding the day before his turbulent interview, declaring their plans for a “full super league by 2024.” 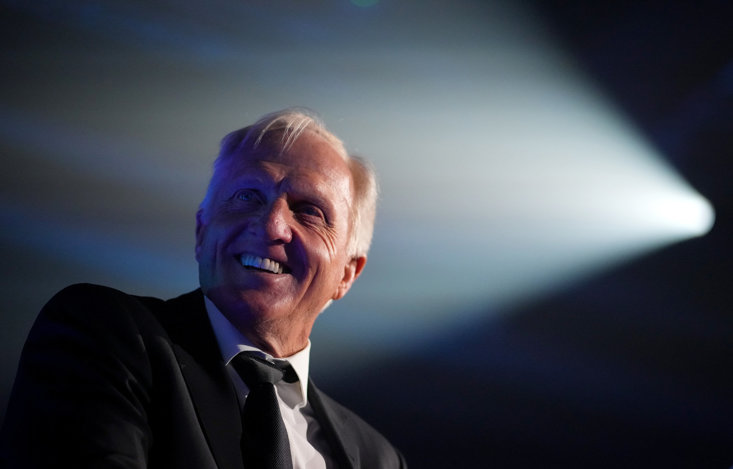 There was more radio silence until June 1st, when LIV Golf presented its first field list to the world, including a shock reveal of 2020 Masters champion Dustin Johnson who had previously stated his allegiance to the PGA Tour in February. Alongside him was Lee Westwood, Kevin Na, Sergio Garcia and Louis Oosthuizen. Phil Mickelson was absent from the list, however there were only 47 names filling the 48 rows of the field list.

On June 6th, Mickelson announced that he would take part in London, playing his first tournament since taking a leave of absence from the sport in February, following the Saudi International. Alongside this acquisition, Arlo White was poached as the new play-by-play commentator, famously known for his coverage of the English Premier League and appearances in Ted Lasso.

June 7th saw the LIV Golf draft, where teams were assembled in a private event in London, similar to the American collegiate drafting system, but with established players and rookies all thrown in the same class instead of college players. The team names were announced, with Dustin Johnson’s ‘4 Aces’ leading the pack.

The Fried Egg
@the_fried_egg
Captains and team names for the first LIV event. Phil Mickelson's team is the “Hy Flyers.” 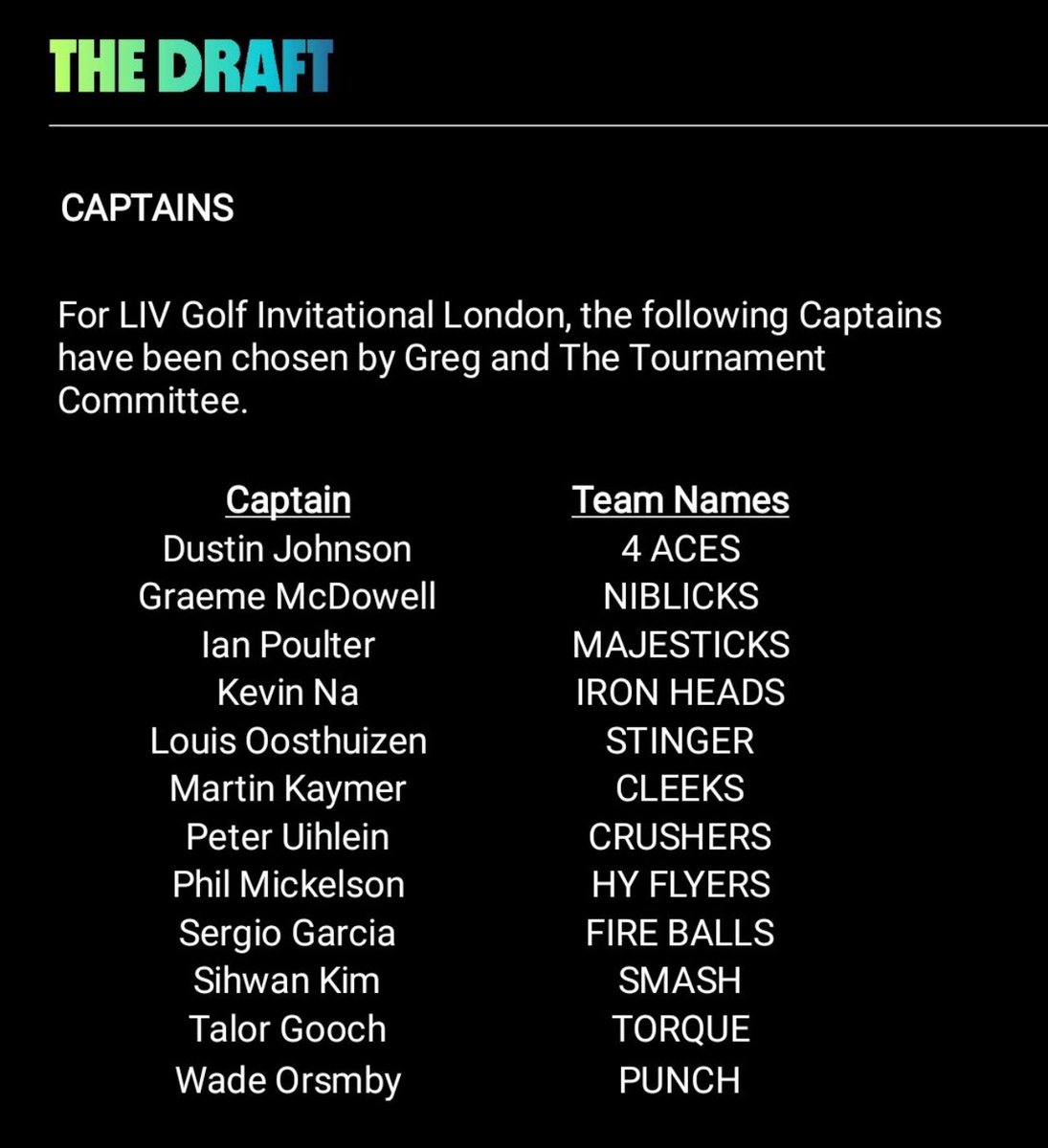 Most recently came the announcements of three new PGA Tour stalwarts expected to join LIV Golf in their second event in Portland. Bryson DeChambeau was reportedly offered $100 million to join, which persuaded him to make the move, while Patrick Reed and Rickie Fowler are expected to follow ‘The Scientist’.

Play got underway at 2pm on Thursday June 9th, with the shotgun start method elected to start the rounds, with each team being dropped off at their elected hole via a classic London black cab.

x
Suggested Searches:
The Sportsman
Manchester United
Liverpool
Manchester City
Premier League
More
golf
Bryson DeChambeau Hopes People Can See The 'Good' Saudis Are...
LIV Golf star Bryson DeChambeau has said that he wants people to see the ‘good’ that Saudi [ ... ]
golf
The DP World Tour Bans LIV Golf Players From The Scottish Open
The DP World Tour has handed out £100,000 fines to all the players who competed in June’s [ ... ]
golf
R&A Confirms LIV Golf Series Stars Will Be Invited To The Open...
The Royal & Ancient Golf Club has confirmed that players signed up to the LIV Golf Series will be [ ... ]
golf
US Open Preview: European Stars Can Dominate The Top Ten
After weeks of folie à deux in the world of golf, the world’s finest players return to [ ... ]
golf
Rory McIlroy And Linn Grant Weekend Wins Overshadow LIV Golf...
The inaugural LIV Golf event at London’s Centurion Club was left in the dust on Sunday thanks [ ... ]
golf
Dustin Johnson's Defection Could Change Not Just Golf But Sport...
To call Dustin Johnson’s withdrawal from the PGA Tour on Tuesday “seismic” would be [ ... ]
golf
Everything You Need To Know About The 2022 PGA Championship
‘This is Major’ is the PGA’s chosen slogan for their flagship major event, as the [ ... ]
golf
Betfred Donate £19,000 To Prostate Cancer UK After Danny Willett...
Thorbjørn Olesen may have walked away with the Betfred British Masters title over the weekend, [ ... ]
golf
Betfred British Masters: Thorbjorn Olesen Triumphs With Spectacular...
Thorbjorn Olesen clinched the Betfred British Masters title with an incredible 35-foot putt on the 18th [ ... ]
golf
Thorbjorn Olesen Three Clear Heading Into Final Day Of Betfred...
Following a miserably wet Friday, the sunshine returned to The Belfry on Saturday as round three of [ ... ]
golf
Hurly Long And Danny Willett Shine On Day Two At Betfred British...
It was another action-packed day at The Belfry in Sutton Coldfield for day two of the Betfred British [ ... ]
golf
Great Danes Enjoy Profitable Opening Day At Betfred British...
If watching Christian Eriksen run the show in the Premier League wasn’t enough, now several other [ ... ]
golf
Everything You Need To Know About The Betfred British Masters
The British Masters is upon us and Danny Willett has chosen The Belfry again as the host for one of [ ... ]
golf
Phil Mickelson Plays Both Sides As Golf’s Civil War Begins
Phil Mickelson, American golf hero and people’s champion left many fans flabbergasted by [ ... ]
golf
Lazarus With A Five Iron: Tiger Roars Back At The Masters On...
On April 14 2019, the weather was looming ominously in Augusta, Georgia. The only thunder that ultimately [ ... ]
golf
Scheffler Shines, Rory Reborn & Tiger Returns: 5 Things We Learned...
Scottie Scheffler's stunning season continued this weekend as he clinched the first major of his [ ... ]
golf
Tiger’s Greatest Triumphs: Three Times Woods Defied All The...
You simply couldn’t write the life of Tiger Woods. A man that has seen it all, won the lot and [ ... ]
golf
The Masters Best Picks And Tips: Can Tiger Woods Live The Dream...
Tiger Roll might’ve called it a day after Cheltenham, and Subway might’ve called time on [ ... ]
golf
25 Years On: Remembering When Tiger Woods Became The Masters’...
Way before his slams, his swings and scandals, Tiger Woods paved the way as a phenom in the world of [ ... ]
golf
Everything You Need To Know About The 2022 Masters Tournament
The famous green jacket is up for grabs once again as the golf world descends on Augusta, Georgia for [ ... ]
golf
Where? When? How To Watch? Everything You Need To Know About...
One of the highlights of the golfing calendar arrives next week in the form of the sport’s “fifth [ ... ]
golf
Five Of The Best UK Golf Courses You Can Play For Under £100
The majority of UK golf courses we see the likes of Bryson DeChambeau, Rory McIlroy and Jon [ ... ]
golf
IN PICTURES: Five Of The Most Beautiful Golf Courses In The...
Widely regarded as one of the best looking golf courses man has ever crafted, Pebble Beach in California [ ... ]
golf
Drama Surrounding Saudi Super Golf League Could Rumble On For...
Although this feels like an idea which has just been ignited, the concept of a breakaway league in golf [ ... ]
golf
Why The DP World Tour Will Help European Golf
As the PGA Tour came to a close before September’s Ryder Cup, the European Tour has entered its [ ... ]
golf
USA Complete Ryder Cup Annihilation As Cantlay And Scheffler...
The USA regained the Ryder Cup on Sunday, finishing off a convincing exhibition of matchplay golf by [ ... ]
golf
Team USA Dominate Day Two Of Ryder Cup Leaving Europe With A...
Team USA stretched their lead to 11-5 on day two of the Ryder Cup at Whistling Straits after another [ ... ]
golf
Ryder Cup Pairings 2021 Day One: Rahm And Garcia Eye Up Titanic...
The Ryder Cup pairings have delivered once again. Europe will start by sending out world number one [ ... ]
golf
Everything You Need To Know About The 2021 Ryder Cup At Whistling...
The 2021 edition of the Ryder Cup begins on Friday a whole year after its initially scheduled start [ ... ]
golf
Will Shane Lowry Make It? Europe's Ryder Cup Qualifying Race...
The Ryder Cup kicks off later this month at Whistling Straits and Europe’s men will be hoping [ ... ]