Football
News
Atalanta and RB Leipzig are the first UCL debutants to reach the quarter-finals since Leicester City in 2016-17
Jack Porter
15:00, 11 Mar 2020

A decade ago, RB Leipzig were making their debut in the Regionalliga Nord, the fourth division of the German football league system. Around the same time in Italy, Atalanta were back in Serie B having suffered relegation the previous season. Just five years ago, Atalanta narrowly avoided the drop from Serie A again, and RB Leipzig had finished fifth in the German second tier, Bundesliga II.

This week, in March 2020, the two sides became the first teams this season to progress through to the last eight of the Champions League, the elite European competition and the most prestigious club competition in world football. More impressively, both are enjoying their debut campaigns in the tournament.

Last year’s finalists Tottenham Hotspur were put to the sword by RB Leipzig in a 4-0 aggregate victory, whilst Atalanta steamed past two-time runners-up Valencia, having scored four goals in each leg, the second through the individual courtesy of Josip Ilicic.

The two teams are the first Champions League debutants to reach the quarter-final stage since Leicester City in 2016-17. Furthermore, Atalanta are the first Italian side to do so since Lazio in the 1999-00 campaign, and are the first team in Champions League history to progress to the knockout stage having lost the first three rounds of the group stage, having narrowly advanced by a single point over Shakhtar Donetsk.

In a competitive sporting climate where a European super league continues to be mooted, both Atalanta and RB Leipzig should be lauded for their progression.

However, it is fair to say that it is Atalanta who enjoys a more respected status. La Dea were established over a century ago, in 1907 - the same year as such recognisable teams from across the continent as Fenerbahçe (Turkey) and Real Betis (Spain) - and though they have never won the Serie A, they joined the Italian league in 1929. Atalanta have just one major trophy in their 113-year history, the 1963 Coppa Italia. They came agonisingly close to their second last year, before defeat to Lazio.

Atalanta’s swashbuckling style for a Champions League qualification spot saw them score the most goals of any side in the 18/19 Serie A season, and look in good position to do so again - at the time of writing they are ten goals clear of any attack-minded competitor. Their entertainment value adds decent currency to the likeable ‘little horse’ - particularly for a team domestically neighbouring the dual giants of AC and Inter Milan - for an upset in a continental competition dominated by behemoths, whilst the passion of Atalanta’s ultras are recognised and celebrated.

Marten de Roon
@Dirono
Bergamo, in this difficult time this is for you! 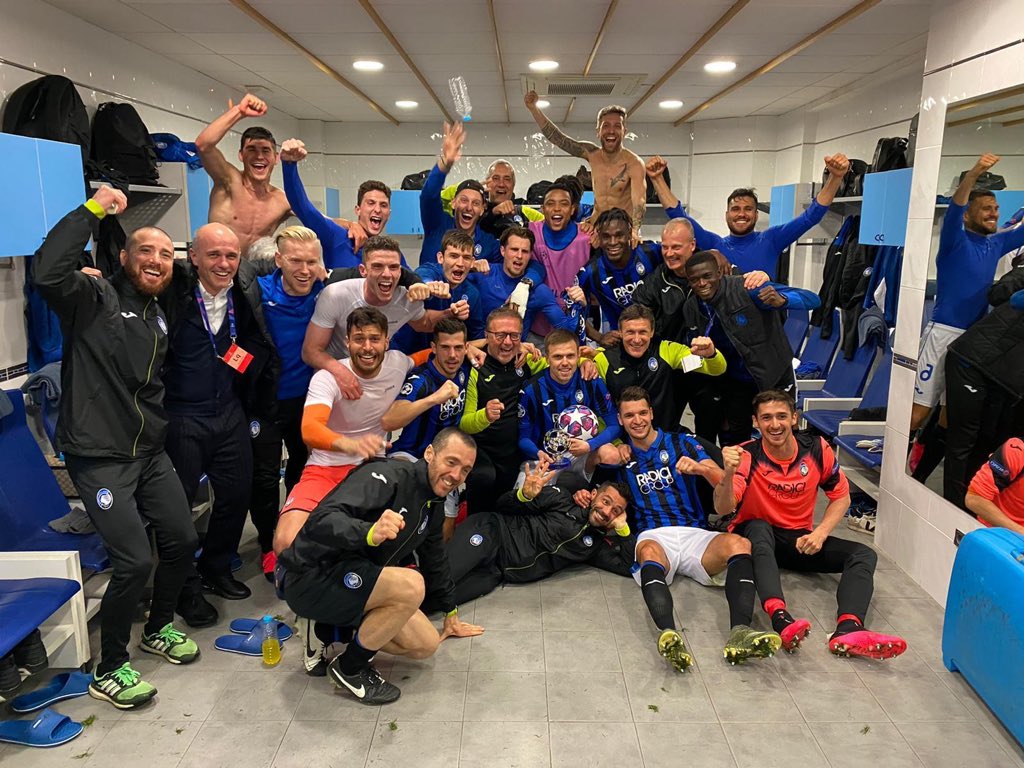 RB Leipzig on-the-other-hand are a different story. In Germany, continued demonstrations against the owner of RB Leipzig’s Bundesliga rivals TSG 1899 Hoffenheim, Dietmar Hopp, an owner who has fuelled a rapid ascendancy from the depths of the divisions with his millions, are based on the same animosity that has been levelled towards RB Leipzig.

Formerly known as SSV Markranstädt, a fairly innocuous fifth-division side in Saxony, the club was purchased by Austrian energy drinks giant Red Bull in July 2009, along with the club’s licence, crest, kit and player rights. It became the fifth team under the Red Bull banner, alongside such teams as Salzburg and the New York Red Bulls.

They moved into the Zentralstadion, expanding and improving it into the Red Bull Arena - a name that still cannot be used in European matches. Everything about RB Leipzig’s creation stands in direct opposition to what the ethics of football in German are continuously held up as. ‘RB’, it is continuously stressed, stands for ‘RasenBallSport’.

It, of course, means that this doesn’t infringe upon German rules that outlaw sponsorship in team names. Furthermore, to comply with the ‘50+1’ rule - intended to keep German clubs in control of a democracy - Leipzig charge exorbitant prices for membership, whilst reportedly keeping the power in the hands of the select few, namely employees and associates of the Red Bull brand (per The Guardian). They also possess one of the highest transfer budgets in Germany, an annual figure of around £85million (per The Telegraph). The narrative of buying success is unrelenting.

There are, however, clear arguments for the detractors of the consensus.

32-year-old Julian Nagelsmann is the youngest manager to ever win a Champions League knockout game, outclassing the experience of Jose Mourinho in the Spurs dugout, the latest line in an increasingly impressive CV that has kept him relatively isolated from criticism. Last year’s Champions League winners and Club World Cup holders Liverpool have profited from the Red Bull operation - Naby Keita and Sadio Mane are both alumni, the former having transferred from Red Bull Salzburg to sister-station Leipzig in 2016 before making his move to Merseyside two years later.

The latter is currently favourite for Premier League Player of the Year. Star striker Timo Werner continues to be linked to a big-money move whilst man of the moment Erling Braut Håland gained attention through a short spell of exceptional prolificacy at Salzburg. There is talent and it is being mined. As one of only three current Bundesliga clubs located in the area formerly East Germany, it also suggests a resurgence of prestige and value in the region, when teams from the other side of ‘the divide’, Bayern Munich, Borussia Dortmund, have historically dominated.

Neutrals viewing this year’s Champions League competition, tempted to have a dog in the race have the easy option: there is an organic nature intrinsic within Atalanta that cannot be bought, steeped in history, striving for long, elusive silverware. Even dedicating their win over Valencia to the COVID-19 hit area of Bergamo, Lombardy from which they herald umphs their likeability factor. Ultimately, however, RB Leipzig’s own contribution - despite the divisive nature of their existence - cannot be undervalued.