It was over almost before it began. Eighteen months of waiting culminated in a dominant Amanda Ribas smothering the plucky but outgunned Paige “12 Gauge” VanZant with high knees, then tipping her over to execute a perfect arm bar that had the Oregon flyweight tapping out inside the first round.

As one-sided contests go, this Abu Dhabi, Yas Island encounter was in a league of its own. Paige broke her arm fighting Jessica-Rose Clark in her flyweight debut back in 2018 (she had stepped up from straw-weight) and it’s been holding her back ever since. The Ribas fight was originally due in March, the arm was injured in training and the fight postponed until July 11th when the inevitable injured-arm-gets-bent-backwards happened.

Nobody was surprised, except possibly Michael Bisping whose ringside commentary was a perfect kiss-of-death outburst: “There’s no quit in Paige VanZant! Oh! She’s tapped out!”. Ribas is a war machine, and has won four straight battles in the Octagon. Paige has spent over a year recovering and although her record stats at 5-4, she is now better known for her work away from fighting, with over 2m fans on Instagram, a second place on America’s hugely popular Dancing With The Stars and her memoir, Rise: Surviving The Fight Of My Life.

Who cares? A fighter’s life is their own, and anyone who can make money away from sheer brutality should be commended. But for Paige, it has opened revenue streams that have put her at odds with the big boss himself, Dana White, UFC president and total king of his fighting fiefdom. 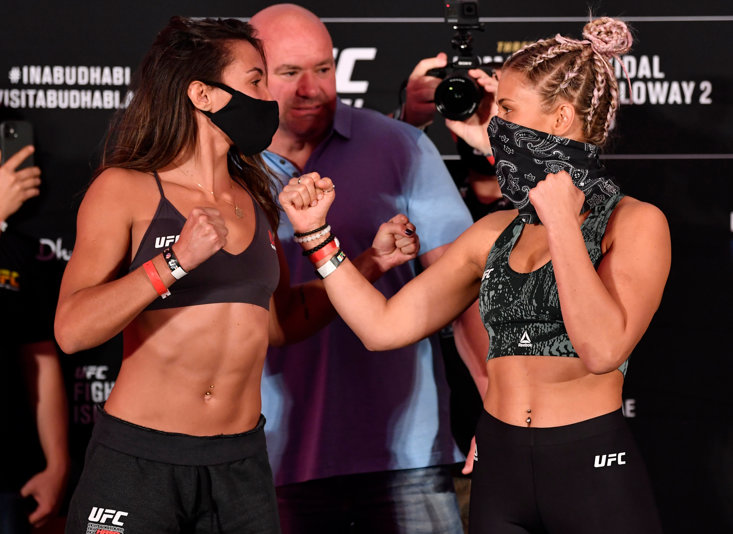 In an interview with ESPN, VanZant vented her frustration on her UFC contract (which, she claims, is the same one she signed half a decade ago at the age of 22). “Everyone knows how much I make. I make $46,000 a fight. I’m not gonna hide it, everyone knows. I can make way more than that promoting brands on Instagram.

“I have made more money in Dancing With The Stars than I have in my entire UFC career combined… Every fight, every win, every bonus. And it just shows the money is out there – I love fighting, it’s what I love to do.”.

Dana is no stranger to his stable of fighters complaining about pay, but this one seems to have particularly irked, and when Paige arrived in Abu Dhabi, he and Ribas were waiting. Amanda did the work inside the ring, he delivered the coup de grace in the press room.

“When you talk all that stuff, ‘I’m not being paid enough,’ and you’re fighting inconsistently, one time in the last year, and then got smoked in the first round of the fight? She should definitely test free agency.”

But the truth of the matter is, Dana needs the Paige VanZants of this world. Their crossover-audience brings high volume eyeballs and credit cards for pay-per-view events, which aren’t being bolstered by live crowds. And aside from the UFC, there are other options for Paige. The WWE is calling, and the world of adoring fans, crafted storylines and choreographed moves looks an ideal fit for the 26 year-old. But no matter how bullish Dana may seem, he’s one of the best businessmen in the world. And he knows money when he sees it. Little wonder, despite the damning words and global speculation on free agents, VanZant took to Instagram yesterday to publish simply, “The sun will rise, and we will try again.”

Whether it’s the Octagon or the wrestling ring, only time will tell, but one thing is certain, wherever Paige VanZant goes, 2.2m Instagram followers will be right behind her.

x
Suggested Searches:
Manchester United
Liverpool
Manchester City
Marcus Rashford
Premier League
More
mma
Gilbert Burns Is Back And Looking To End Kamaru Usman's Unbeaten...
The UFC’s efforts to ensure events remain watchable throughout the Covid-19 pandemic are set to [ ... ]
mma
The Diet Plan McGregor Is Using To Ensure He’s Fighting Fit...
Conor McGregor returns to the Octagon this weekend when he takes on Dustin Poirier for the second time [ ... ]
mma
At £330,000, Ronda Rousey Is The Highest Earning MMA Fighter...
It’s been a long time coming and the only person more prepared than the fans is the man himself [ ... ]
mma
Talented, Tough And Charitable, Who Is Conor’s UFC 257 Opponent...
All eyes will be on Conor McGregor this weekend as he makes his return to the Octagon after another [ ... ]
mma
Michael Bisping’s Believe You Me Is The Perfect Pod To Satisfy...
With nearly 300 episodes to currently demolish, this is the podcast to satisfy your MMA munchies.  [ ... ]
mma
Sanitised Violence: When Cage Warriors Went Behind Closed Doors
Just before UK lockdown began, top European MMA promotion Cage Warriors took place in a hauntingly deserted [ ... ]
mma
''Best Shape I've Ever Seen Him'' - Conor McGregor Bringing...
The wait is almost over as Conor McGregor makes the final preparations for his return to the Octagon [ ... ]
mma
From The Greatest To The Fiercest, UFC 245 Promises A Night...
Let’s take stock for a second. 2019 has delivered some blistering moments. Who can forget Jorge [ ... ]
mma
Hungry And Focused, It's The New Improved Conor McGregor
Conor McGregor’s striking coach, Owen Roddy, insists his fighter “has that hunger again” [ ... ]
mma
''Focused'' Conor McGregor Announces His Octagon Return In 2020
Conor McGregor has come out of MMA retirement and announced his return to UFC at the start of next year. [ ... ]
mma
From Flanker To Fighter: James Haskell Talks To TheSportsman...
Former England rugby star James Haskell announced last week that he'll be swapping his scrum cap [ ... ]
mma
His Three Most Notorious Moments Inside The Octagon As Conor...
The former UFC featherweight and lightweight champion Conor McGregor has announced his retirement [ ... ]
mma
Tenshin Nasukawa Unleashes Amazing Capoeira Kick To Bounce Back...
The defeat to Floyd Mayweather in a farcical exhibition big-money boxing match on the last New [ ... ]
mma
#Bellator216: Michael Page Outpoints Paul Daley In Disappointing...
Michael ‘Venom’ Page outpointed long standing rival Paul Daley at the Mohegan Sun Arena [ ... ]
mma
#Bellator216: MVP And Daley Set For All-British Brawl In Connecticut
The biggest domestic UK MMA fight of all time goes down this Saturday evening… in Connecticut, [ ... ]
mma
Aaron Chalmers Suffers Shock Defeat In Hometown Bellator Newcastle
Bellator kicked off their European Series in Newcastle with a bang, with an incredible twelve finishes [ ... ]
mma
Aaron Chalmers Aims To Please As Bellator Heads To Newcastle
Aaron Chalmers bids to move to a perfect 5-0 record as a mixed martial artist in his hometown, as he [ ... ]
mma
Conor McGregor 'Clone' - German MMA Fighter Emulates His Hero...
If you are going to model yourself on UFC Legend Conor McGregor then you better be able to deliver the [ ... ]
mma
Conor Mcgregor And Khabib Nurmagomedov Slapped With Hefty Bans...
Conor Mcgregor And Khabib Nurmagomedov have both been banned for their parts in the mass brawl that [ ... ]
mma
Tenshin Nasukawa Responds To Conor McGregor Calling Him Out
The Japanese martial artist Tenshin Nasukawa has seemingly not allowed his confidence to be knocked [ ... ]
mma
Celtic Gladiator 22: Brendan Loughnane And Kane Mousah Headline...
European mixed martial arts show Celtic Gladiator return to Manchester on Friday night for the second [ ... ]
mma
Horrendous Scenes As MMA Fighter Dislocates His Knee Whilst...
Not what you want to see on a Sunday morning but here we go anyway. As we know, MMA is probably the [ ... ]
mma
Yair Rodriguez Stuns Chan Sung Jung With Last Second Knockout...
Yair Rodriguez produced a sickening elbow to the face of Chan Sung Jung in the last second of their [ ... ]
mma
Conor McGregor Inspires Dallas Cowboys To Victory And Claims...
Conor McGregor bounced back from his defeat to Khabib Nurmagomedov by watching the Dallas Cowboys beat [ ... ]
mma
Conor McGregor's Top 5 Knockouts
The return of Conor McGregor to the octagon after an extended… sabbatical will redraw the collective [ ... ]
mma
Korean Taekwondo Team Dazzle Audience With Action Packed Display
It’s over ladies and gentleman. If you’re thinking about taking up Taekwondo, or looking [ ... ]
mma
Ultimate Fighter 27 Finale Is Perfect Prelude To UFC 226!
The Ultimate Fighter Season 27 draws to a close as the perfect warm-up act for the hotly anticipated [ ... ]
mma
Aaron Chalmers' First Bellator Bout Sees The Ex-Geordie Shore...
On Friday night, MMA fighter Aaron Chalmers sensationally won his bout with Ash Griffiths by technical [ ... ]
mma
UFC Atlantic City: Kevin Lee Misses Weight, Main Event Still...
The octagon returns to Atlantic City, New Jersey for the first time in nearly four years with the promotion [ ... ]
mma
Jacare Meets Brunson In Main Event At UFC Charlotte
The octagon returns to Charlotte, North Carolina after almost an eight-year hiatus with a twelve-bout [ ... ]