Derek Chisora did it again. As he was beaten, bloodied, knocked down and battered by Joseph Parker, he refused to admit defeat. Every time he was hurt, he came roaring back with combinations. Every time the big Kiwi looked like scoring his 22nd career stoppage, Chisora swung power shots in a way that said “You’ll have to do better than that, Joe”.

Chisora once again delivered a fight we’ll be talking about long after he retires. But something else was evident in that raucous AO Arena atmosphere. The fact that said retirement should arrive sooner rather than later.

It seems cold to posit this about a man who has just given a former heavyweight champion one of his toughest nights. But Chisora has done this before, countless times, too many times. It’s why we love him. He’s the St Peter to the heavyweight heaven's gate, his fists are his clipboard. If you want to move on and challenge for world honours, you have to get through ‘Del Boy’ first.

Tyson Fury had to do it twice, Oleksandr Usyk did it on his way to shocking the world against Anthony Joshua. Kubrat Pulev controversially beat the man they call ‘War’ on the way to his own shot at ‘AJ’. And if you weren’t up to snuff, if you were unequipped for brutal battle, Chisora would let you know. Carlos Takam, Malik Scott, Sam Sexton, Kevin Johnson. Challengers past and possibly future, if they hadn’t walked into a freight train called Derek.

Of course, the Zimbabwe-born puncher had his own shot at world glory. Chisora gave WBC boss and consensus number-one heavyweight at the time Vitali Klitschko all he could handle back in 2012. The mystique that surrounds Chisora first crystallised around this fight. First, ‘Del Boy’ slapped Klitschko at the weigh-in. Then he spat water at Vitali’s brother, fellow heavyweight champion Wladimir, during the pre-fight introductions. The Klitschko machine ran on intimidation during that decade of dominance, but Chisora would not play their mind games. 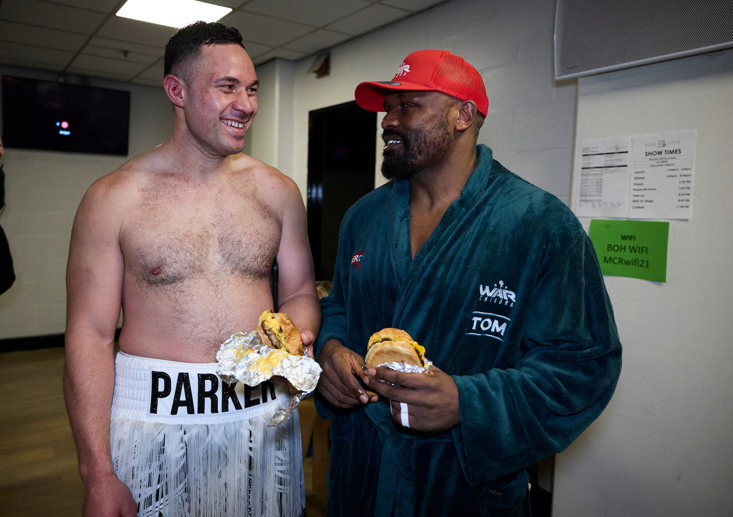 the spoils of war: chisora chows down with parker after their classic battle (Mark Robinson Photography/Matchroom)

You will know by now that Derek did not emerge as the heavyweight champion of the world. He did not even run it close on the scorecards, but what he did was put Klitschko under more pressure than any fighter had since Lennox Lewis had beaten him nine years before. ‘War’ Chisora frequently pinned ‘Dr Ironfist’ to the ropes and wailed away with body shots. He closed the distance on a fighter whose jab was borderline sacred, he did not allow Vitali to fight the signature Klitschko fight. ‘Del Boy’ emerged from the bout with a lot of credit, proving he belonged in the upper echelon of the heavyweight division.

That credit would not last past the post-fight conference. Chisora took exception to David Haye turning up, trying to stir up his own possible shot at Klitschko’s WBC belt. ‘Del Boy’ left the podium and walked into the crowd, Haye responded by throwing a punch at him while holding a glass bottle. The resulting brawl would see both men fined and banned by the British Boxing Board of Control. But really, there was only one way to settle this most bitter of spats, and that was in the prize ring.

Under the auspices of the Luxembourg Boxing Federation, the pair would fight at Upton Park, the since-demolished home of West Ham United. As he invariably does, Chisora gave everything. But ‘Hayemaker’ had too much power for him, and won by fifth-round TKO. It would be the last meaningful win of Haye’s career, but Chisora was just getting started.

For the ensuing near-decade, Chisora has carved out a niche for himself within boxing’s foremost division. He has won 17 fights since Haye stopped him, and lost eight. Those losses have come at the hands of five men. Two are the current heavyweight champions, Usyk and Fury. One is a former champion in Parker, another is a former challenger in Pulev. The other two men to find a way through ‘War’ are Dillian Whyte, the WBC mandatory challenger, and Agit Kabayel who is unbeaten and world-ranked. Chisora has lost a lot of fights, but never against less than the very best.

These losses, as was the case this past Saturday night, usually come after stunning acts of courage in utterly violent fights. The savage Parker rematch will enter the lexicon of British boxing in the same way Chisora’s battles with Whyte have. It will be endlessly replayed, dissected on social media, and you might even find this writer doing an ‘On This Day’ retrospective on it one day. It was a masterclass in the unique brutality of heavyweight boxing. And that is precisely why it should be the last time we see Chisora in a prize ring.

Derek Chisora 🥊
@DerekWarChisora
Manchester, thanks for having me again. A big shoutout to @joeboxerparker for winning it. Thankyou to everybody who came to the Arena or tuned in on @DAZNBoxing last night. I hope everyone has an amazing Christmas and I'll see you all next year. We are not done yet. #warchisora
247
6508

The truth is, after falling to Parker the only way is down from here. The New Zealander is a world-class fighter, but a rung below the Joshua/Fury/Usyk triumvirate. Chisora’s choices amount to a steady step down in class, where he runs the risk of being relegated to just a name on the record of up-and-comers. It can happen, just look at former Chisora victim Danny Williams. A fellow Vitali Klitschko challenger, and the man who shook up the sport when he knocked out a fading Mike Tyson in 2004.

The former British and Commonwealth champion now carries 30 losses on his sagging record, is 48 years old, and has embarked on a sad world tour of any boxing outpost that will license him. A legacy that should be etched in stone is eclipsed by the mossy growth of his sad decline. Nobody wants to see Chisora go from a fighter only beaten by the best, to a fighter defeated by anyone with two gloves and a license.

The counter-argument is that Chisora has just given a top heavyweight everything he can handle. But that is how it starts, with a brave but ultimately fruitless display against a fighter you might have caught out a few years ago. With the doors to world level closed for the foreseeable future, if Chisora was to drop down to domestic level he might struggle to rouse the same interest. What would a man who has headlined the biggest stages gain from trying to win back the British title he last held 10 years ago? Going over old ground can breed complacency, and, for a fighter who has taken as much punishment as the 37-year-old, that complacency can be lethal.

Of course, the decision rests with ‘Del Boy’. Chisora will decide whether discretion is the better part of valour. If there are more wars to fight, this cherished fighter may go out and fight them. But it would be tragic to see what has been a wonderfully entertaining career marred by decline and possibly irreversible damage. Derek Chisora has given boxing fans so much, he does not owe us one single punch more. At ease, soldier.