If there’s one smidgen of a silver lining we can take from this damn pandemic, it’s that we’ve been treated to a bounty of incredible docuseries to keep us entertained. From the early days of the lockdown when the world was enthralled and shocked in equal measure by the antics of the Tiger King, to the epic re-telling of Michael Jordan’s Chicago Bulls’ tenure in The Last Dance and lately the access-all-areas Spurs doc All or Nothing, we have been spoilt rotten.

One such docuseries, which dropped in the middle of August on Amazon Prime and has been criminally overlooked, is the sensational World’s Toughest Race. The name might sound hyperbolic but trust us, this really is the most insane, adrenaline-filled, drama-laden race you’ll ever witness. Hosted by Bear Grylls, The World’s Toughest Race makes any of the survival expert’s previous TV shows look like A Place In The Sun by comparison. 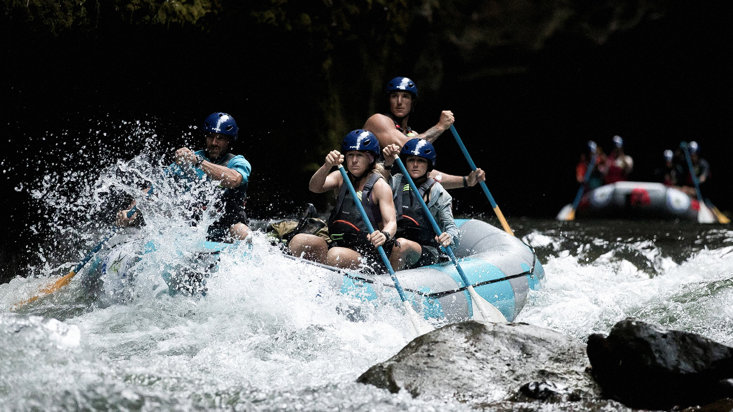 The premise is simple - over 60 teams, made up of four competitors each, from every conceivable corner of the globe, must race in the Eco-Challenge, a 417-mile (671k) journey across Fiji which features some of the toughest terrain on the planet. Competitors compete for 24 hours a day (the race brings new meaning to ‘power-nap’) for 11 days straight, as they swim, climb, sail, mountain bike and much more across the Pacific island. It is the ultimate test of endurance and one of the most awe-inspiring shows you’ll see in 2020. Here are five reasons, you definitely shouldn’t miss out on The World’s Toughest Race.

These are the warriors who make the docuseries what it is. The show is essentially split between two factions, the front of the pack, the teams who are veterans of the adventure racing world and are expecting to land on the podium, and then there’s the teams who just want to finish. Make no mistake the frontrunners are superhuman, but every single person who undertakes this task will leave you absolutely awe-struck.

Grizzled explorers, war veterans and people who simply just want to prove they’re tough enough to make the distance, the race caters for everyone. Among the most inspiring (and trust us, there are a lot) are Team Stray Dogs, a squad made up entirely of veteran adventure racers going for it one last time on the brink of their seventies. Word of warning, don’t watch this hungover…you will cry.

With over 260 people making their way through ice cold rivers, unbreachable jungles and the steepest inclines this side of Kilimanjaro, you’re bound to come across drama along the way, and The World’s Toughest Race has it spades. Watching a stranded team from Estonia wade their way through a hurtling river in the depths of the night, with the water levels rising by the second, is one of the most intense visual experiences outside of Netflix’s Free Solo.

We don’t want to give it all away before you’ve seen it but once you’ve seen someone nearly succumb to hypothermia and still finish the race, or see a woman crawl to a rescue helicopter on her hands because an infection was eating away at her feet, you’ll soon realise these are some of the toughest hombres on the planet.

The nation island itself is a gem to behold. Utterly beautiful and jaw-dropping one second, a malevolent spirit the very next, picking off these unwitting competitors one by one. Even when the athletes are at their absolute lowest, freezing cold or in the aftermath of the gnarliest mountain bike crash, Fiji looks as beautiful as ever from the highest mountain range to the smallest village.

The next Eco-Challenge is pencilled in for Patagonia, hopefully next year (current pandemic pending, of course), where the next batch of competitors will face an equally spectacular course that “may include sections of fixed ropes, trekking, glacier travel, horseback riding, mountain biking, kayaking and special challenges”. Bring. It. On.

The island wouldn’t be what it is without the people who inhabit it and it just so happens that Fijians are amongst the happiest and loveliest people on the planet. Cheering on the competitors the whole way, giving them shelter, care and food - the people of Fiji, literally in some cases, carry them over the finish line.

Fiji are also represented in the race with their own teams, and watching them work together to complete the race, brothers and sisters in arms, is one of the most heart-warming moments of the show. 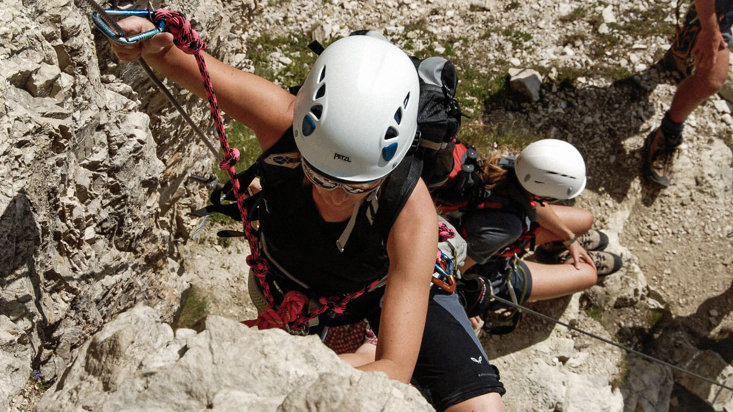 You might not want to sign up to the first adventure race you see once you’ve finished this series but you’ll be itching to get out and do something, even if it's that 5K you’ve been putting off since forever. While many of the athletes in The World’s Toughest Race are undoubtedly superhuman, many are simply ordinary with the potential to do extraordinary things - if they can do the seemingly impossible, why can’t you?

You can watch all ten episodes of The World’s Toughest Race on Amazon Prime now.

x
Suggested Searches:
Manchester United
Liverpool
Manchester City
Marcus Rashford
Premier League
More
sports
Five Things You Probably Didn't Know About The Tony Hawk's Pro...
For a number of millennials, few athletes encapsulate their childhood as the skateboarder [ ... ]
sports
The Year Of The Fox: How The Sporting City Of Leicester Emerged...
In 2012, the greatest thing to happen to the city of Leicester was that the remains of King Richard [ ... ]
sports
No Passion, No Point: Eddie Hearn's Podcast Returns For Third...
He’s now as popular, big, and perhaps as bombastic as the boxers he promotes. Eddie Hearn is also [ ... ]
sports
With 100 Days To Go, Team GB Are Already Set For A Historic...
With 100 days until the delayed Tokyo Olympics, Team GB look set to make history before they have even [ ... ]
sports
Ranking The Best And Worst April Fool's Day Pranks From The...
So another April Fool’s Day has come to an end and as the sun sets on what for some jokers is [ ... ]
sports
The Good, The Bad And The Downright Ugly, What Happens When...
Italian giants Inter Milan have revealed a brand new club badge ahead of the Nerazzurri’s 113th [ ... ]
sports
Ahead Of Hendry Vs White, Here Are The Sporting Rivalries We’d...
As Stephen Hendry and Jimmy White are all set to rekindle their famous old snooker rivalry having been [ ... ]
sports
From Bruno Vs Tyson To Last Chance U: Five Must-See Sports Documentaries...
Rejoice! The end of lockdown is nearly in sight. Sadly, there’s still plenty of time until things [ ... ]
sports
From Eddie Hearn To Jamie Carragher, Here Are Five Must-Reads...
It’s the first Thursday of March and that can only mean one thing: It’s World Book Day. [ ... ]
sports
Amateur Sport To Be Allowed In England From 29 March
Outdoor grassroots sports will return in England from 29 March, prime minister Boris Johnson confirmed [ ... ]
sports
Brady's Bromance, Nadal's City Of Love And The Greatest Love...
Roses are Red,  Violets are Blue, We live for sport, And we know you do, too! Valentine’s [ ... ]
sports
Messi Reaches Goal Number 650 At Barca, Five Weekend Stories...
Lionel Messi continued to boggle the mind with the 650th goal of his Barcelona career, Patrick Reed [ ... ]
sports
The Socially Distant Sports Bar Is Like Being In The Pub With...
The day will come. We’ll be back. The beloved British pub will fling its doors wide open once [ ... ]
sports
The Six-Day Plan That Can Turn You Into A Hollywood Hardman...
Is there an actor who represents the quintessential British hardman better than Jason Statham? Probably [ ... ]
sports
It’s Mahomes vs Brady At The Super Bowl, Five Sport Stories...
In a weekend which saw UFC 257 and the FA Cup grabbing a lot of attention, there was plenty of other [ ... ]
sports
Daniel Craig's Full-Body Bond Workout That Will Turn You Into...
The release of No Time To Die is a bittersweet one. On the one hand, after months of Covid-induced delay, [ ... ]
sports
The Super-Quick Routine Jason Mamoa Used To Get Ready For Aquaman
Is Jason Mamoa the coolest actor in the world? Maybe. The Guinness swigging, axe-hurling Hawaiian actor [ ... ]
sports
Max Holloway Is A UFC Record-Breaker, Five Weekend Stories You...
All the attention might have been on the anti-climax that was Liverpool vs Manchester United this weekend, [ ... ]
sports
From Fernando to Maradona, These Are Five Of The Best Sports...
Yep, back again. Nope, not out and about, meeting up with our mates or heading to the football but instead [ ... ]
sports
The Five Key Moves Cavill Uses To Get In Supernatural Shape...
Netflix’s TV series adaptation of The Witcher proved to be one of the most popular shows to land [ ... ]
sports
Work Out Like A WWE Superstar With John Cena’s Five-Day Training...
He’s widely regarded as one of the greatest professional wrestlers of all-time, has nearly 15 [ ... ]
sports
Conquer Those New Year Resolutions With These Five Fantastic...
During the first quarter of 2020 fitness apps were downloaded a staggering 593million times. Factor [ ... ]
sports
Work Out Like Hollywood’s Hardest Worker, Mark Wahlberg, With...
Mark Wahlberg hits the big 5-0 this year, and in those five decades the man from Boston, Massachusetts [ ... ]
sports
Why The History Channel’s Arctic Edition Of Alone Is Unmissable...
There have been a plethora of crazy TV series in recent years, take The World’s Toughest Race  [ ... ]
sports
Cheeky Chappie Jimmy Bullard’s Fishing Pod Is A Remarkably Down...
Fishing is one the sports that has seemingly proven immune to COVID-19 restrictions. You’re (usually) [ ... ]
sports
The Women’s Six Nations, Eubank Jr And Trump Are The Weekend's...
We may all be stuck inside but sport is continuing for now, which means some things may have slipped [ ... ]
sports
Boost Your New Year Goals With These Five Essential Bits Of...
Running is one of the simplest forms of exercise someone can do to stay in shape but that doesn’t [ ... ]
sports
In Time To Play Hulk Hogan, Here's How Chris Hemsworth Got God-Like...
Chris Hemsworth took Instagram by storm in November when a picture posted by the Australian actor, of [ ... ]
sports
The Weight-Lifting Workout Brad Pitt Used To Create His Fight...
It’s been more than twenty years since the David Fincher masterpiece Fight Club premiered for [ ... ]
sports
Build Muscle And Burn Fat With These Three Bodyweight Routines...
Health kicks can certainly be expensive but that doesn’t mean that they have to be. Sure, if you’re [ ... ]