Football is full of what-ifs. What if Diego Maradona’s ‘Hand of God’ goal against England never stood? What if Sir Alex Ferguson had caught the bullet at Manchester United in 1990? And what if Manchester United had been selecting Thiago Alcantara on Tuesday night rather than facing him?

This week, we witnessed the Spaniard command the midfield battle (if we can even call it a battle) as the Merseysiders ran out as 4-0 winners at Anfield. The former Bayern Munich star showed his class with the ball at his feet to run his pressers ragged and spray the ball across the width of the pitch in a dominant performance for both team and individual.

Had history been written differently, the 31-year-old could well have been playing for the opposition.

The year is 2013 and David Moyes is Fergie’s replacement at Old Trafford. To assist his successor in rebuilding the squad, Ferguson had helped line up a deal for Moyes to bring Thiago to United from Barcelona. Nothing materialised as Moyes shut down the deal, eventually opting to bring his loyal gladiator, the towering Marouane Fellaini, across from Everton after a move for Cesc Fabregas fell through. This decision epitomises the decade of bad decisions the club have made since Ferguson called time on his career. Thiago was just another one of their recent mistakes that came back to haunt them on Tuesday night.

United were short in midfield with the ever-present Fred and Scott McTominay injured and benched respectively, while Paul Pogba went off within minutes of the first whistle. But not one player could get within touching distance of Thiago, who was the main catalyst for Liverpool’s success in the first half. His twists and turns were sublime but his anticipation in seeking space ensured that once he was in possession there was nothing that United could do to stop him from unleashing the frightening front three of Mohamed Salah, Sadio Mane and Luis Diaz. 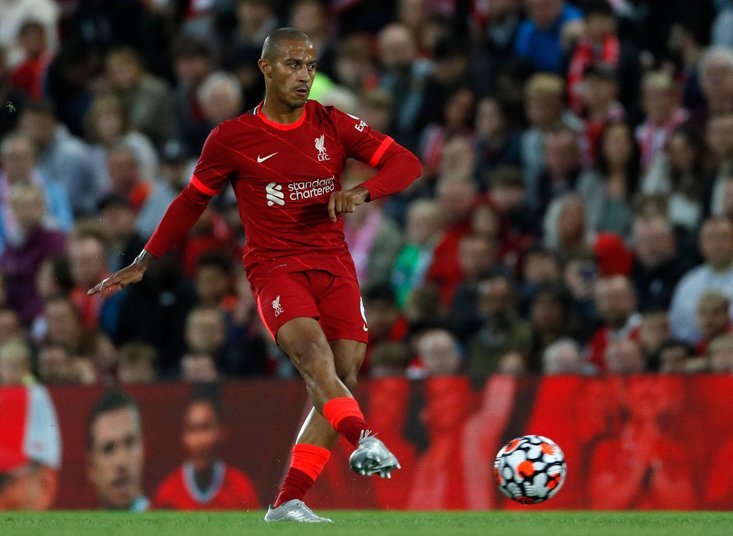 Thiago shows the drive, composure and skill that sums up Liverpool’s rise to the peak of football and is a key reason why the murmurs of a potentially immortalising quadruple are slowly turning closer to reality with each electric display.

When he arrived on Merseyside in September 2020, some questioned Liverpool for investing around £25 million in an ageing player, going against the recruitment policy we’ve come to know over the last few years. However, although he struggled in a season when Jurgen Klopp’s ranks were blighted with injuries, this term he has demonstrated his quality time and again.

The relationship he has built with Fabinho in midfield is quite special and the pair have been key components for the Reds, becoming integral to the success they have achieved this season. Not to mention it has been the most productive pairing in the Premier League this term.

Thiago has been one of the brightest midfielders of this generation, and with each passing game the money Klopp spent on bringing him to Anfield looks like one of the biggest steals in recent memory.