Sam Tomkins hates losing. In fact the older he gets, the more the England captain despises it.

He knows that this autumn represents one final shot at winning a World Cup for his country. The Catalans Dragons full-back is finding his fiercest fire in the twilight of his career.

"There is nothing in the world I would rather be doing than playing rugby. But I’m sick of England playing second or third fiddle,” he tells me this week.

“This is our chance. There will be no more waiting for the next one, it is too far away. I certainly won’t be playing in the next one. I hate losing in any jersey and I have lost to New Zealand and Australia too many times.”

We are chatting on a call from Tomkins’ beautiful family home in the south of France. His brother Logan, a retired player himself, is in the swimming pool out back. The 33-year-old apologises profusely for being half an hour late, which is unheard of for him. His son had been at hospital overnight and the doting dad had only just returned home with him.

He is in the midst of preparations for the Dragons next home fixture, against one of his favourite opponents Leeds. Rhinos fans hate him, probably dating back to when he flashed them the bird during the Challenge Cup Final in 2011.

"It's one of them when you can't remember who started an argument," he recalls of his career-long feud with Leeds. “But I couldn’t care less if 'Dave28' on Twitter calls me a w****r,” he adds of the vitriol from rival fans that has punctuated his successful playing career.

Indeed he relishes it. When arranging this interview, and knowing he was speaking to a Rhinos fan, Tomkins dryly messaged to say this would be a suitable week given “we’ve not got much training to do as we are only playing Leeds”.

But while admitting the Dragons have themselves been going through a wobble – “some really poor performances from us in recent weeks” - it is England and the World Cup that Tomkins is most keen to discuss. His desire to sign off his international career with the sport's biggest prize is palpable. But first point up for discussion is the opinion-dividing, brand-spanking new Betfred England kit, whose daring navy blue chevron rather than the traditional red trim has been the subject of great debate this week. 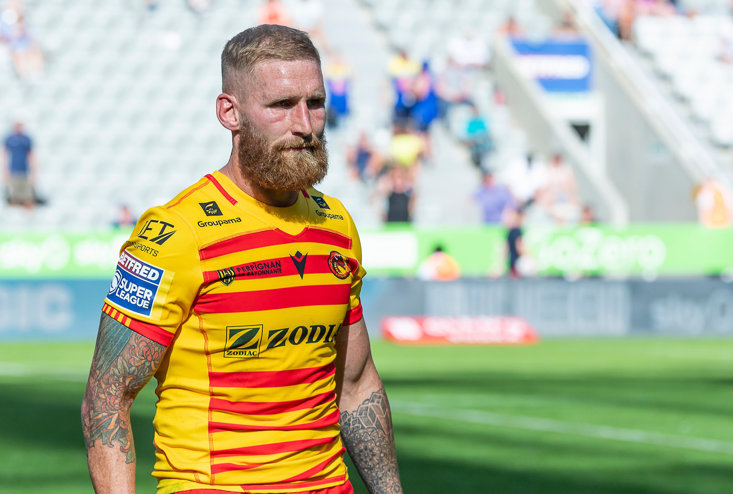 “If we win the World Cup that will be the most bought shirt and up on bedroom walls for decades,” he says. “Lets not worry about the colour, let's focus on what we can do in it. If we are lifting the World Cup wearing those jerseys then every kid will want one.”

Tomkins admits he hopes to lead England again this autumn but has not yet been asked by Shaun Wane to skipper the side for the tournament. He also expects James Roby to be in that team – his view on that big debate is that the St Helens legend will reverse his international retirement to play in the tournament so long as he is fit to do so after the playoffs and expected Grand Final.

As a player and as a person, Tomkins says he himself has matured from that feisty young lad keen to rile opposition fans, and although he still enjoys doing that, he knows his role now is very different.

“I’m one of the leaders in our group. I’ve been playing a long time and that’s my job, that’s what I’m paid to do. The club didn’t just sign me to play full-back, they wanted me to have influence and be the leader which is something I have done for a long time. It’s something I’m well suited to.”

Tomkins has the rest of this year planned out – a Grand Final with the Dragons he says is a minimum requirement for their season, before heading into battle with England for what he hopes will be that historic home World Cup win. He will play on for one more year and is keen to settle in France after his retirement.  How his life looks from there onwards is a little hazier he admits. Tomkins also discusses how life after league may look on the latest Love Rugby League podcast.

“I always get asked if I am going to go into coaching as people presume if you have played in a spine position then you will do that,” he says.

“It’s not something I’m passionate about but I am interested in doing some position-specific coaching when I finish, working with half-backs, full-backs, positions I have played in. Apart from that it is just keeping playing as long as I can. I am loving rugby. When I signed here for 2019 it was to do three seasons and retire. So last season was that time, but it doesn’t feel like that anymore. I was probably at a lull in my career but at the moment I feel healthy and I wanted to keep playing. I’ve a lot of gratitude for the opportunities I have and I want to keep it going for as long as I can.”

England are 6/1 to win the RLWC with Betfred*