Rugby
News
The situation between Scotland’s star player and coach is going to be hard to repair
Rhiannon Garth Jones
09:00, 15 Feb 2020

Forget the Le Crunch, Calcutta Cup, England vs Wales, and the battle for the wooden spoon. This Six Nations, it’s been all about Finn Russell vs Gregor Townsend, Scotland’s star player vs Scotland’s coach (and one-time star player himself, of course).

There has been a seeming avalanche of press releases, media interviews, opinion columns, and hot takes and it’s unlikely to stop any time soon. Should one player be above the team? Is Townsend doing his job? Can Scotland win without Russell? And, possibly the crucial question: what on earth is going on?

To have any chance of understanding the situation, you have to pause and rewind. This has been building for a while – since before Scotland’s disappointing exit from the Rugby World Cup and before last year’s Six Nations. And some of the major details lie with the Scottish Rugby Union, not the coach or fly-half.

In June 2018, Russell’s father, Keith, former Director of Domestic Rugby at the SRU, won an unfair dismissal case against the SRU, having been sacked in May 2017. The official judgement deemed his firing was “both procedurally and substantively unfair”. That judgement is just one of many reasons why Mark Dodson, the current CEO of SRU, is a controversial figure but it is obviously of specific relevance here.

What is also important to understand is how much Dodson has tied himself to Townsend. In 2012, it was Dodson who was behind Townsend’s appointment as head coach at Glasgow Warriors and, in 2017, it was Dodson who promoted him to Scotland coach, rather than renew then-head coach Vern Cotter’s contract. Dodson is the third key player in this relationship.

That’s the main background. In 2018, Russell moved away from Glasgow Warriors, where he was once coached by Townsend, to French side Racing 92. He has since said that move has given him some clarity on the Scottish coaching set-up, as well as the freedom to speak up as he is no longer an SRU employee as many of his international teammates are.

Last year, after the breathless comeback to an ultimately disappointing 38-all tie in the Calcutta Cup at Twickenham, Russell left nobody in any doubt about where the responsibility for the poor first-half performance lay (with Townsend) and who the architect of the thrilling second half was (himself), revealing that the two had argued over tactics at half-time and he had insisted on changing Townsend’s approach.

In hindsight, after taking such a public stand against the coach, it was inevitable that the relationship had the strong potential to deteriorate further, especially given the disappointing Scottish performance in Japan. Another aspect of all this is that, until January 2020, Scotland had no Director of Rugby to oversee things. Jim Mallinder has now started the role but seemingly either wasn’t alerted to this issue or didn’t prioritise addressing it early on. Now it is going to be much harder to repair. 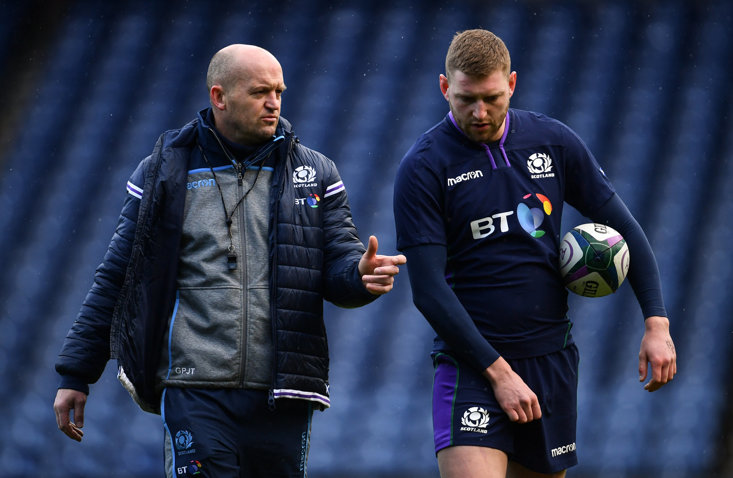 Both Russell and Townsend have given their side of the events that led to Russell leaving the Scotland camp at the beginning of the tournament in a public forum. Whichever side you lean towards, it seems clear that Russell does not want to play for Scotland under Townsend. The coach, meanwhile, has said that Russell is welcome back under certain conditions, suggesting he won’t back down either.

So where does that leave Scotland?

Given what we know about Dodson’s relationship with Townsend so far, it seems unlikely that the coach will be sacked any time soon, despite a run of tournaments where Scotland have fallen short of their potential. Sometimes, adverse circumstances can galvanise a team – in 2019, a large part of the Wales squad was facing imminent unemployment but seemed to pull together in camp. But it’s not clear that Townsend has anything like the man-management ability of Warren Gatland.

The longer the situation goes on, however, the worse it is likely to get. If Scotland continue to lose, Russell looks increasingly important (and possibly correct in his opinions about the coaching team) but his Scottish teammates might start to resent him as well as the coach and the higher-ups at the SRU. If Scotland pull together and perform, Russell could end up isolated in Paris, one of the best players in the world left out of international rugby, and a cause célèbre when anything goes wrong.

It is unlikely that Townsend would be replaced before the tournament’s end but, if Scotland were to end fifth or sixth in the table, would Dodson finally pull the plug? And who might replace him if he did? Much of the talk is focused on Richard Cockerill, the head coach doing such a good job at Edinburgh currently.

Cockerill would certainly be an excellent choice and he knows many of the players well. But does it make sense to weaken one of Scotland’s pro teams when the Glasgow head coach has so recently departed sooner than expected?

One name that has escaped much notice currently is Michael Cheika, the former Australia head coach. Cheika remains the only coach to have won the major rugby club competition in each hemisphere, has international experience, plays the brand of rugby that Scotland wants to see, and excels in man-management. If the SRU did want to look beyond Townsend, there is a candidate who might just be perfect for them. The crucial word, however, is “if”.