Gone are the days of the little and large double act upfront. Back in the time when 4-4-2 ruled football, the towering targetman would take down the ball and feed the nippy, pacy striker to score. It is a distant memory. Now in an era of false nines, technical talent reigns supreme and teams work the ball into the net with pass after pass after pass. They tire the opposition into submission, working the play before pulling the trigger.

However, as Chelsea battled Leeds at Elland Road on Saturday lunchtime, their lack of potency in the first half proved there are times when you need a striker to just stick it in the net, to sniff out danger, hog the six yard box and be in the right place at the right time. Blues manager Thomas Tuchel’s decision to go without a recognised striker meant the game finished 0-0.

The Chelsea boss set up with Kai Havertz in the central forward position, Christian Pulisic out wide on the right and Mason Mount in midfield back up by left-wing back Ben Chilwell. Of course Havertz is more than capable of finding a goal with 36 Bundesliga strikes for Bayer Leverkusen before the age of 21 but he is a playmaker, winger, an attacking midfielder; not a striker. This season, he has six goals, with half of them coming in the League Cup. While the German and Pulisic are certainly a massive threat, they want to attract the ball wherever it may be and make things happen. The forward pair don’t have the nous of a traditional striker, the nous to make runs into the box, to stay central, to focus solely on the space between the two posts.

It was curious then that Tuchel had Olivier Giroud and Timo Werner on the bench. While the former is absolutely a goalscoring targetman, Werner too is an attacker sometimes deployed on the wing but certainly plays more as a natural forward. While Tammy Abraham is out with an ankle injury, Chelsea’s manager needs to stick with a striker at the top of the pitch. 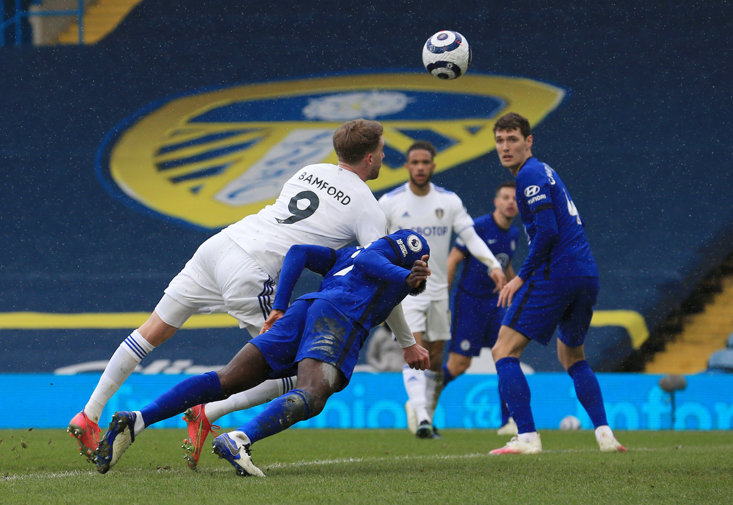 The German has seen his side concede just twice in eleven matches since taking charge and this, here at Elland Road, was Marcelo Bielsa’s Leeds. Going forward, they will always create chances and chaos and so perhaps Tuchel intended to flood the midfield to limit the home side. However, it came at a price as his side looked toothless. Sure, they buzzed around in the attacking third and yes, they did carve Leeds open and create chance but the net did not bulge.

The Yorkshire club suffered too as Patrick Bamford, who started his career at Stamford Bridge and has 13 goals for Leeds in the Premier League this season, was forced off on 35 minutes with an injury. Before his setback, he launched himself at a whipped in cross and flew through the air with his head but was denied by Antonio Rudiger who showed the same bravery. It was that intent shown by Bamford which Chelsea lacked.

Giroud, sat on the bench, would have attacked the ball with the same vigour but wasn’t fancied to start in this one. Chelsea toiled and kept possession but their attacking moves all came to the same conclusion and Leeds had the ball again.

Tyler Roberts also went close for the hosts, closer than Chelsea had managed, hitting a stunning strike which curled high above Edouard Mendy who appeared to get a slight touch on the ball before it struck the bar and bounced away from danger. The goalkeeper was called into action again later and produced a brilliant stop to deny Raphinha.

Havertz saw a golden opportunity go begging for Chelsea early in the second half. After taking an excellent touch, the ball landed perfectly for him but in space he directed his shot right at the goalkeeper.  Havertz should have scored. A recognised central striker likely would have done.

While Tuchel was averse to starting an out-and-out attacker, Bielsa seemingly wasn’t a fan on Saturday either. It was Rodrigo who came on for Bamford in the first half but it was Rodrigo who also went off with ten minutes to go, replaced by midfielder Mateusz Klich. The sub got subbed, just as Tuchel had done to Callum Hudson-Odoi at Southampton last month, Bielsa wasn’t afraid to follow suit as he looked to ensure his team got a point.

Chelsea had nearly two thirds of the possession and most of the shots, with half of them on target when Tuchel finally introduced Werner in place of Pulisic on 66 minutes.

The former RB Leipzig frontman has sometimes struggled since arriving in the summer, things not really clicking for him on the ball though he has still sunk eight goals in the Premier League and Champions League. However, again he drew a blank in his 24 minutes on the pitch and Chelsea had to settle for a goalless draw.

Speaking after the game, Tuchel said, "We had enough chances but sometimes it's like this and it's hard to score. We have to keep on working hard, be more clinical and be more precise."

It was Leeds who started with a striker and Leeds who were precise and had the better chances.

The false nine is so in vogue in today’s game and boasts so many tactical benefits, but sometimes, you just need someone whose entire game revolves around putting it in the back of the net.