It’s been quite the year for the Ultimate Fighting Championship. The return of fans in Jacksonville to see Kamaru Usman, Rose Namajunas and Valentina Shevchenko get their hands raised as champions was incredible, as well as many of the belts around the weight divisions moving around. Francis Ngannou, Brandon Moreno and Charles Oliveira were among Americans Aljamain Sterling and Rose Namajunas to hear Bruce Buffer exclaim his famous ‘AND NEW…’

Now we’re into the final three months of the year, and Dana White has got some incredible nights planned for MMA fans around the world, including three events on at primetime for European fans.

The three main events in the run-up to the end of the year sees six huge title fights. UFC 267, live from Abu Dhabi’s Etihad Arena, hosts Polish light heavyweight champion Jan Blachowicz defending his title against Brazilian-American light heavyweight legend Glover Teixeira, who is looking to get his hands on a title for the first time, after losing to Jon Jones back in 2014. Blachowicz is coming off the back of a groundbreaking victory against the previously-undefeated Israel Adesanya, who was aiming to beat the Pole and become a two-weight world champion. 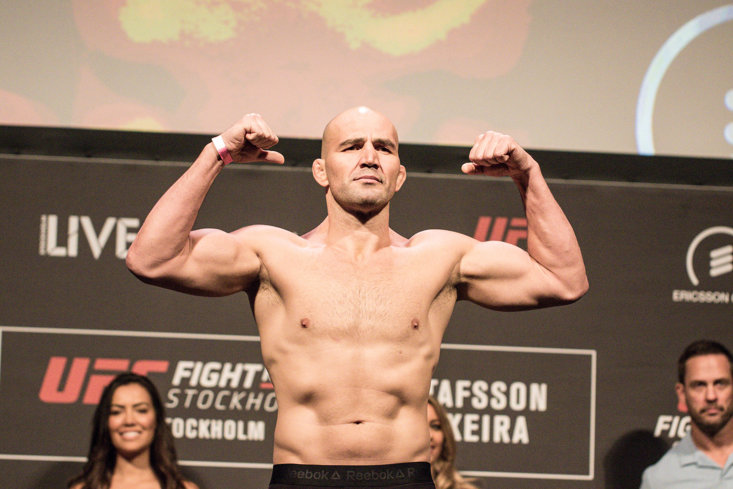 The co-main event also includes the cancelled Petr Yan bout, with bantamweight champ Aljamain Sterling pulling out of the fight due to injury, leaving Yan opponentless until rising star Corey Sandhagen stepped in to fight for the interim title. Sandhagen has had an impressive year so far, notably winning a performance of the night bonus against veteran Frankie Edgar thanks to an incredible flying knee knockout.

This was followed by a controversial split decision loss to TJ Dillashaw, but it clearly hasn’t hampered his chances at winning a title. Petr Yan is also coming off the back of a controversial bout after kneeing a downed opponent and being disqualified in the title fight against Aljamain Sterling. Also featured on the card is Manchester’s Lerone Murphy, returning to the cage for the first time since January, looking to become the latest Brit to continue their unbeaten record, as well as Kiwi fighter Dan Hooker, stepping in to fight for the second time in the last two months.

Just a week later is the incredible card of UFC 268 back in Madison Square Garden, giving MMA fans some incredible bouts. Kamaru Usman and Colby Covington run it back for the welterweight belt for a second time, hoping to give us another five rounds of carnage. Rose Namajunas defends her strawweight title in a rematch with Zhang Weili, after winning the title in their first clash back in April. 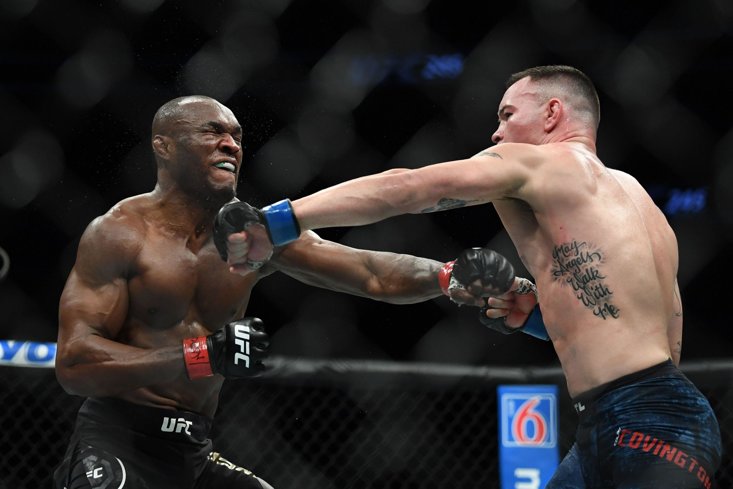 On top of these two blockbusters is Justin Gaethje vs Michael Chandler in a battle at the top of the lightweight division, with both men coming off the back of title-fight losses. The aforementioned Frankie Edgar also features on the main card, with real estate mogul Al Iaquinta also included on the undercard. It’s worth noting that it’s daylight savings time in the USA on the night of the event, meaning that British fans can enjoy the fights an hour earlier than normal!

The final main event of the year so far has only a few fights announced, but Jorge Masvidal vs Leon Edwards is finally happening, just two and a half years after Masvidal and Edwards clashed at UFC London, which was described by Masvidal as giving the Birmingham fighter a ‘three-piece with a soda.’ Amanda Nunes also returns to the ring to defend her two belts against Julianna Pena, a fight initially intended for August before Nunes was forced out of the bout with COVID. Dustin Poirier vs Charles Oliviera is also expected to be announced in the coming weeks, with Poirier going for the title for the first time since losing to Khabib Nurmagomedov in 2019.

In between all of this mind blowing action, we’ve got fight nights featuring Max Holloway vs Yair Rodriguez, Paulo Costa vs Marvin Vettori and Rob Font vs Jose Aldo to keep us entertained in the meantime.

x
Suggested Searches:
Manchester United
Liverpool
Manchester City
Marcus Rashford
Premier League
More
ufc
UFC Fight Night: Jose Aldo And Rob Font Collide In Bid To Set...
The Ultimate Fighting Championship returns from a rare weekend off thanks to the annual American bonanza [ ... ]
ufc
UFC 268: Gaethje Vs Chandler Steals The Show As The Titles Stay...
Saturday night saw the MMA world descend on New York City’s world famous venue, Madison Square [ ... ]
ufc
Revenge Or Repeat For Usman Vs Covington? UFC 268 Betting Preview
In a quite ironic twist of fate, the Oxford English Dictionary’s word of the day (at the time [ ... ]
ufc
Teixeira Wins As Brilliant UFC 267 Kicks Off A Fall Festival...
One of the UFC’s frequent stints outside of the States took place again last Saturday evening, [ ... ]
ufc
UFC 267: Everything You Need To Know About Blachowicz vs Teixeira...
UFC returns to pay-per-view this weekend with a card that boasts two championship fights, and a host [ ... ]
ufc
Dern Return: The UFC Fight Night 194 Preview
The UFC Apex in Las Vegas, Nevada hosts a huge women’s strawweight clash on Saturday when Mackenzie [ ... ]
ufc
2020 Breakout Star Kevin Holland Has It All To Lose in 2021
2020 was a year most of humanity would like to forget. But while the rest of us were locked down in [ ... ]
ufc
Where? When? How To Watch? Everything You Need To Know About...
The UFC returns to pay-per-view this weekend with a stacked card. There are two world title fights, [ ... ]
ufc
UFC 266: Why Joshua vs Usyk Isn’t The Only Fight Worth Watching...
The UFC returns to pay-per-view on Saturday night with a stacked card emanating from the T-Mobile Arena [ ... ]
ufc
UFC Fight Night 192: Light Heavyweights Lead The Way In Nevada
The UFC returns this Saturday with Fight Night 192, two weeks removed from Liverpool’s Darren [ ... ]
ufc
For Whom The Bell Tills: What Next For ‘The Gorilla’?
Darren Till’s third-round submission loss to Derek Brunson on Saturday night has left the Liverpool [ ... ]
ufc
Viva Scouse Vegas: Liverpool’s MMA Royalty Descends On Nevada
The UFC Apex in Enterprise, Nevada is bracing itself for a British invasion on Saturday night, as the [ ... ]
ufc
Chikadze vs Barboza: Georgia’s Skilled Striker Faces Tough Test...
Giga Chikadze might’ve began his UFC career with a loss, but since his shortcoming on Dana White’s [ ... ]
ufc
UFC Fight Night Sees The British Take Over Las Vegas Led By...
The stage has been set for the UFC to return to the UK since Jorge Masvidal’s famous knockout [ ... ]
ufc
Usman vs Covington II Heading To UFC 268 As Leon Edwards Misses...
A busy week for the UFC began with the announcement of a Welterweight title defense and a highly-anticipated [ ... ]
ufc
What Next For Conor McGregor After UFC 264 Loss To Dustin Poirier?
Conor McGregor’s future has been left up in the air after he suffered his second defeat in six [ ... ]
ufc
Your Guide To UFC 264 As Conor McGregor And Dustin Poirier Clash...
The much-anticipated trilogy between Conor McGregor and Dustin Poirier goes down on Saturday, July 11 [ ... ]
ufc
Who Is Conor’s McGregor's UFC 264 Opponent Dustin Poirier?
Dustin Poirier will take on Conor McGregor inside the Octagon for a third time at UFC 264 this [ ... ]
ufc
From Notorious Knockouts To Ruthless Rivalries, McGregor's Best...
Conor McGregor, the UFC’s divisive poster boy, returns to the cage on Sunday morning at UFC 264 [ ... ]
ufc
From Biggie To Joe Frazier, Rating Conor McGregor's Most Notorious...
Conor McGregor makes his return to Octagon on Saturday night when he takes on Dustin Poirier for a third [ ... ]
ufc
UFC 264: Everything You Need To Know Ahead Of Conor McGregor...
Conor McGregor and Dustin Poirier will be going at it for a third time this weekend, headlining a stacked [ ... ]
ufc
Your Guide To UFC 263, As Israel Adesanya Takes On Marvin Vettori
UFC 263 rolls into Arizona this weekend, with the small matter of a rematch between Israel Adesanya [ ... ]
ufc
Charles Oliveira Could Fight Conor McGregor In Brazil After...
Brazilian superstar Charles Oliveira could take on Conor McGregor in his homeland after he pulled off [ ... ]
ufc
UFC 262 Preview: A New Heir To The Lightweight Throne Will Be...
It’s been more than three years since we have seen anyone other than Khabib Nurgmagomedov wear [ ... ]
ufc
UFC 261: Jorge Masvidal Suffers First Knock Out As Kamaru Usman...
If the build-up to UFC 261 was hyped up, the night itself exceeded all expectations. In a stunning main [ ... ]
ufc
Kamaru Usman Hints He Could Walk Away After UFC 261 Clash With...
UFC welterweight champion Kamaru Usman has suggested he could walk away from the Octagon after his main [ ... ]
ufc
UFC 261: All You Need To Know Ahead Of A Blockbuster Night In...
Fight fans are in for a real treat in the Octagon this weekend with UFC 261 serving up a blockbuster [ ... ]
ufc
Conor McGregor Cancels Dustin Poirier Trilogy Due To Dispute...
Conor McGregor has insisted his trilogy fight with Dustin Poirier is off after the pair were involved [ ... ]
ufc
New Lightweight Champion To Be Crowned At UFC 262 After Khabib...
It is looking increasingly likely that a new lightweight champion will be crowned at UFC 262 with Michael [ ... ]
ufc
UFC Set To Return In Front Of A Full Crowd With A Stacked Card...
After more than a year of coronavirus-induced capacity restrictions, the UFC is set to finally return [ ... ]